A flagship Hull 2017 project will culminate next month with Land of Green Ginger Unleashed, a spectacular outdoor parade by masters of storytelling and street performance, Macnas.

Land of Green Ginger Unleashed is the live finale in a series of Acts of Wanton Wonder from the Land of Green Ginger. Hull 2017 has commissioned Macnas to bring a procession of wise beasts, giants, shape shifters and mischief makers to Hull’s Old Town from 6.30pm on Saturday 11 November. See the full route map here: 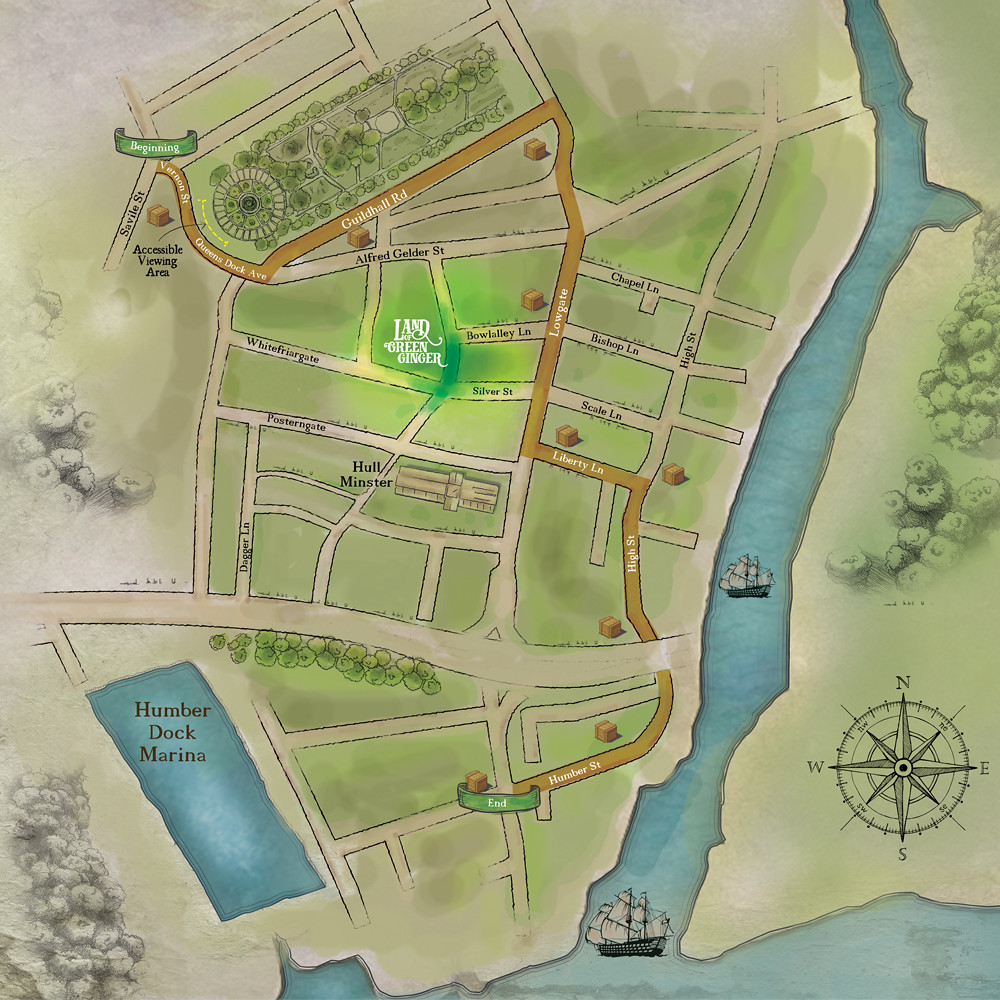 Inspired by a curiously named Hull street, Land of Green Ginger is a programme of free events that have been developed over the last 18 months between artists and community groups, often using local stories as their starting point. The project is supported by Spirit of 2017 and Hull Clinical Commissioning Group and has already attracted an audience of over 50,000.

Katy Fuller, Executive Producer at Hull 2017, said: “Throughout the year, communities across Hull have delighted in the magic and mysticism of the Land of Green Ginger. Old legends have awoken, ancient relics been unearthed and parallel worlds discovered. Now we are bringing a few of those familiar fables back along with a whole host of new exuberant characters as the full force of the city’s imagination is unleashed on the streets of Hull.”

Noeline Kavanagh, Artistic Director of Macnas, said: “The central character is a wise old man, a mystic who has appeared to call the Land of Green Ginger back home, beckoning the joy and waltzing with the darkness. We will create a final night of revelry, populated by dark, delirious and delicious characters to thrill the audience.

Katy added: “Land of Green Ginger started as a way of reaching audiences who are traditionally harder to engage in the arts. We wanted to be accessible and inviting, sparking the imagination of anyone who came into contact with the project in its diverse guises.”

The story began last year with mysterious happenings springing up across the city from a pop-up shop encouraging passersby to fashion a replica nose out of plastic to tiny people inhabiting a bingo hall.

Earlier this year, news broke that a huge cache of crates, stamped with the words ‘To Hull: From Land of Green Ginger’ had been discovered in a vault underneath the city. Fictional investigative organisation, The Green Ginger Fellowship, was called in to find out more.

The crates heralded the arrival of the first Act of Wanton Wonder, 7 Alleys. The concept sparked by local resident Christina Reading’s childhood memory of a mysterious alleyway which only appeared at certain times of the year.

Artists from Periplum reinvented the myth, weaving social history and fictional characters together to create a performance which saw more than 11,000 people packed into a local park over four nights.

Christina said: “From little tearaways to old boys who sit in the pub, they all loved it. People are still talking about it and I can’t stop smiling when I think about it.

“This year has managed to connect people in ways that all the regeneration schemes never managed to do.”

Subsequent Acts have featured the return of the Gold Nose of Green Ginger to Bransholme, a beacon burning bright in Longhill, the collective power of Hull’s voice distilled in Pickering Park and a mini metropolis in Derringham.

Each Act has its own identity and is created by a different artist, for and with a different community. But the crates, which have become the familiar signal to alert residents that an Act of Wanton Wonder is coming to their neighbourhood, and the Green Ginger Fellowship, which investigates the curious contents of the crates, provide the connecting thread between each.

Katy added: “We made an unequivocal decision to lead with the fictional narrative, bringing a playfulness that encourages engagement at all levels. If the audience are able to suspend disbelief and embrace wonder and magic, the Land of Green Ginger will capture them in beautiful stories inhabited by the most extraordinary people.

“We hope that that the story of the year, when anything was possible and neighbourhoods became places of wild imagination, will live on in the urban mythology of Hull forever.”

The parade – which will see Macnas collaborating with And Now, who were responsible for one of the previous Acts of Wanton Wonder, the Longhill Burn – will start at 6.30pm at Saville Street. It will weave along Guildhall Road, Lowgate and High Street before finishing at Humber Street at around 8pm.

To get the full backstory on Land of Green Ginger, visit greenginger.org and follow the Green Ginger Fellowship as they try to unpick the mystery of these strange acts of Wanton Wonder.