BACK TO OURS INTERVIEW: ‘When people get a feeling of that magic, our job’s done’ – Visit Hull
Skip to content

What do you get if you mix the mystical properties of a magic circle with the physical comedy of Buster Keaton and five finely tuned acrobats?

The answer is Tipping Point, an acclaimed aerial show heading to Hull as part of the Back To Ours festival; a celebration of the arts bringing world-class performance right to your doorstep.

Created by aerial theatre company Ockham’s Razor, Tipping Point pushes five daredevil circus performers to the very limits of physicality in a “breathtaking” show that explores trust, control and betrayal all while veering from “catastrophe to mastery”.

Throw in a selection of custom five-metre aluminium poles that are transformed into mountains, valleys, a railway and a whole host of seemingly insurmountable objects along the way and you have the makings of a show that has been described by The Stage as “exhilarating to watch, both thrilling and nerve wracking” and “spell binding”.

There is something magical about watching a show in the round … it bonds the whole room together as one community having one shared experience.
Charlotte Mooney, artistic director, Ockham’s Razor

For Charlotte Mooney, artistic director of Ockham’s Razor and show creator, the real magic of Tipping Point comes from staging it “in the round” with audiences encircling the performers as the action unfolds.

“There is something magical about watching a show in the round,” she says.

“That was the original spark, the very first idea that went on to become this show. We wanted something where the audience could surround the performers and be within touching distance of the action.

“Every single culture that has ever existed has some sort of theatre in the round. The Japanese have Sumo and boxing rings are called rings because originally they were exactly that, round.

“But there’s also something magical about the circle. Pagans held their sacred ceremonies in magic circles, they have magic circles in West African culture, mandala circles in India, Enso circles in Buddhism.

“Through almost all world culture there is a recurrent idea that a circle is somewhere you can contain something; that you can go into a circle and face your demons in a safe place they can’t escape from.”

With the acrobats contained within their own eight-metre diameter “demon-facing” circle, the audience is able to witness the unfolding drama as if they were part of the performance.

“It is exciting to be that close. It does feel like the poles are flying inches from your nose, but we haven’t lost an audience member yet,” laughs Charlotte.

“When you’re watching a show in the round, not only can you see the performers in the middle but the audience on the other side and their reactions; it bonds the whole room together as one community having one shared experience.” 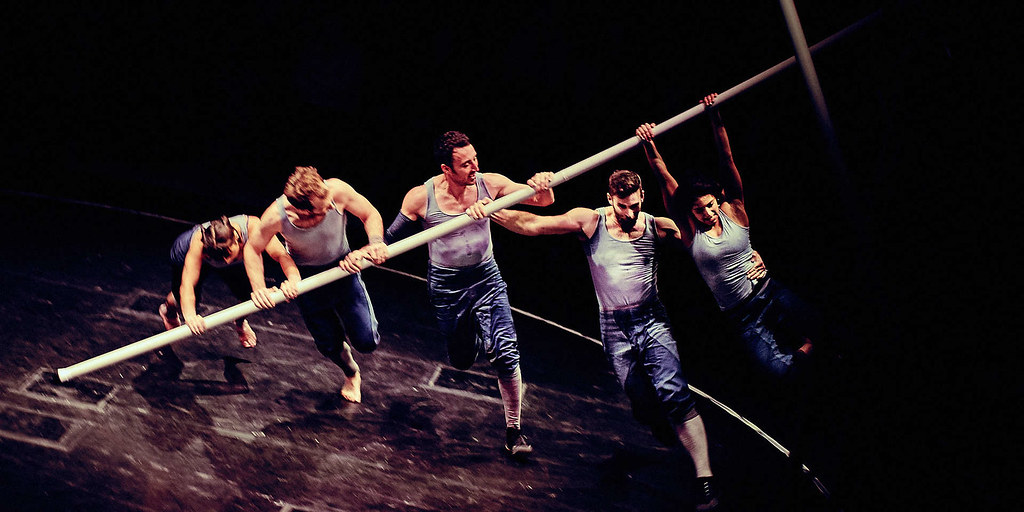 Tipping Point is one of 10 shows being staged as part of the second season of Back To Ours half-term holiday festivals, which are reaching out to parts of Hull not always accustomed to hosting world-class performance.

Ockham’s Razor will be arriving in Hull direct from France, where it is currently on tour on bringing its acrobatic feats to Winifred Holtby Academy, to the north of the city and Sirius Academy West in the west.

Despite dealing with some pretty weighty themes, Charlotte says Tipping Point is very much a family-friendly show that possesses “a lightness of touch” and more than its fair share of comedy.

In fact, one of the major inspirations behind the action on stage is the silver-screen slapstick of movie legend Buster Keaton.

Anyone who has seen the company’s previous visits to Hull – they have previously brought both The Mill and their triple-bill shows to Hull Truck – will know that all their productions are heavily laced with circus-style humour.

Parts of this show are definitely an ode to Keaton.
Charlotte Mooney, artistic director, Ockham’s Razor

“The humour is really important,” says Charlotte, 38, who trained at the Circomedia Academy of Circus Arts and Physical Performance in Bristol after deciding her degree in English literature wasn’t quite providing the high-wire thrills she craved. It was there that she met her partner Alex Harvey and fellow artistic director Tina Koch and the trio founded Ockham’s Razor.

“If you watch any old Buster Keaton film he’s a master of physical comedy,” she says. “Even though the films are silent, you know exactly what he’s feeling and even saying because he’s a master of gesture. Parts of this show are definitely an ode to Keaton.”

Since winning the Total Theatre Award at the 2016 Edinburgh Fringe Festival, Tipping Point has been solidly on the road, mesmerising audiences across the UK and Europe.

But Charlotte is especially looking forward to returning to Hull during its reign as the UK City of Culture and breaking new ground by performing at Sirius West and Winifred Holtby academies.

And she’s confident that Hull audiences will enjoy the show at Back To Ours festival.

“The one word that people often say when we ask for feedback is that it’s ‘mesmerising’ or ‘magical’ – and I’m really chuffed to bits when I hear that,” says Charlotte.

“It’s great because we hope the show is exciting and fun and maybe talking about people’s lives and relationships – if they want to think about it on that deep metaphorical level. But there is another element to it that we wanted to come across too; the idea of the magic nature of a circle, something intangible about time and chaos that’s really hard to put across in words.

“When people get a feeling of that magic then I think our job’s done. Of course, if you don’t want to think about it on a metaphorical level then you can just come along and see our acrobats do some pretty amazing physical circus skills, which is just as valid, too. They are amazing to watch.”

Tipping Point by Ockham’s Razor is at: