When we heard that Davy and Kristin McGuire were packing up their Bristol studio for a move to Hull, we were delighted. Having experienced their incredible work as part of our Land of Green Ginger project in 2017, it can only be a good thing that their skills are joining our cultural landscape on a more permanent basis.

If you’re not familiar with the McGuires by name, you probably caught a glimpse of their work last October, when the artists took over the historic Springhead Pumping Station for two weeks with their jaw-dropping installation Micropolis.

Crafted entirely from cardboard and featuring projections, light and sound, Micropolis was a 10 x 10 metre city showcasing the lives of the tiny people living within it. Using the constant stream of rubbish discarded by humans, the tiny people had gathered, recycled and built their own world, powered by mice. Featuring skyscrapers, shop fronts, bars and gardens, visitors caught glimpses of parties and exercise classes in full swing, with a few cheeky surprises along the way.

Impressive, right? And there’s plenty more where that came from. As they settled in to their new studio on leafy Park Avenue, we chatted to the pair about gothic glamour, relocating and what the future holds.

Q: What gave you the idea of bringing the worlds of ﬁlm, theatre, projection and intricate paper cutting together?

A: Mixing all of that stuﬀ wasn’t intentional. Most of the time we just have an idea for a project, a kind of vision that we then want to bring into existence. In order to do so we experiment and learn about skills and materials that are necessary to make it happen. This year, for example, we learnt how to wood work, which had never really crossed our minds before, but we wanted to make our paper models more durable and sellable so we looked at other materials.

Q: You have worked on some seriously diverse projects, from a commercial with French cognac brand Courvoisier to the world’s ﬁrst projection mapped pop-up book, The Icebook. What has been your favourite project to date?

A: Each project has very diﬀerent perks which is probably the most exciting part of our work. It never gets predictable or boring because chances are, something completely new is around the corner – or sometimes around a few corners. Kristin’s favourite project is Ophelia’s Ghost and Davy’s is Micropolis. 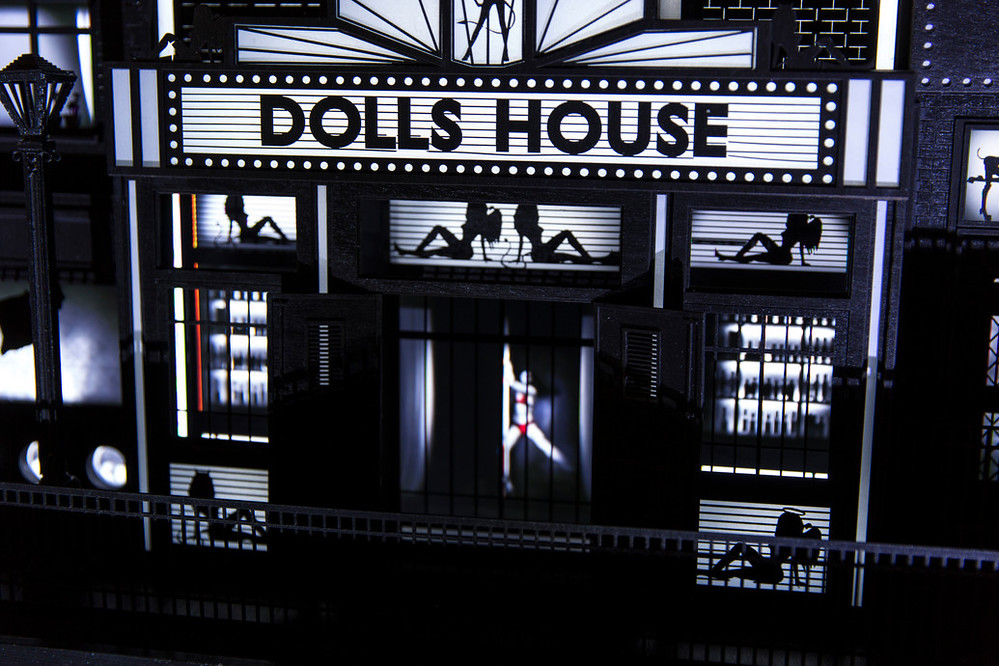 Q: A lot of your projects seem to have a gothic glamour vibe, with a hint of the underworld. What draws you to these particular themes?

A: Those themes oﬀer more drama and are visually quite scintillating. They also oﬀer viewers something to discover, something they don’t encounter every day. Our current exhibition in London, The Dark Dolls House, features femme fatales, exotic dancers and gangsters but also borrower-type pranksters who appropriate children’s toys in order to have fun. The exhibition is going down really well so there must be something in these themes that is alluring to a wider audience.

Q: Your work feels mysterious, and watching it is quite a personal experience. What are the most memorable reactions you’ve had from your audiences?

A: One of those actually happened in Hull. For our Land of Green Ginger pilot project we animated a street in Hull with projections of little people living in the nooks and niches of neglected buildings, feeding oﬀ discarded food and building lives from garbage thrown out by humans.

When the local trouble maker found our work in his patch he seemed so proud of it that he invited the patrolling cops to take a look. That was a scene that made us really happy.

We also sometimes get emails from people who are touched by our work. One that stands out was from a cancer survivor who saw our theatre show The Paper Architect in Australia and she wrote to us saying that each year she survives she remembers the sad, joyous and hopeful experience of The Paper Architect, saying, ‘It made my living experience so meaningful and real‘. 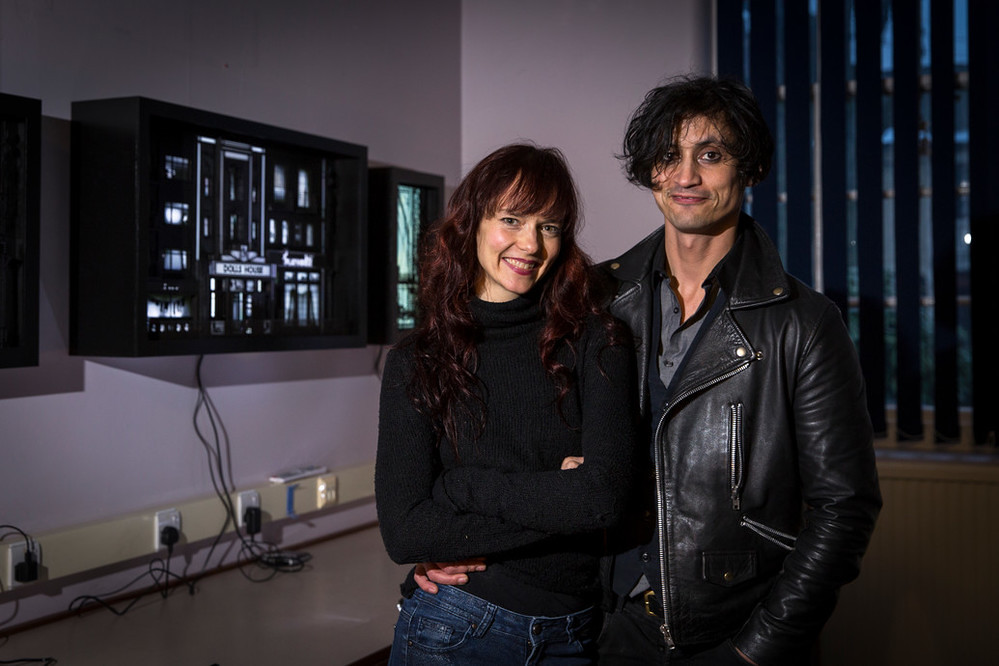 Q: Your move to Hull comes oﬀ the back of your work on Micropolis. What was the initial brief and what methods did you use to tell the story?

Springhead Pumping Station where the piece was installed is a really beautiful but mysterious building and in that sense it ﬁtted the installation because people always wondered what was going on inside – only to ﬁnd that it contained a very quirky micro cosmos.

The idea was to reveal an underworld of pocket-sized people who’d built a city from materials that humans leave behind. Hence the enormous cardboard city structure and the projected borrower type characters who used mice to power their city and feed their inhabitants.

A lot of people from Hull feature as characters. The future plan is to tour the piece internationally and ﬁlm and include local people wherever the piece gets shown. Ideally one day we could come back to Hull with Micropolis and it will be inhabited by a truly international crowd of pocket-sized people.

Q: What drew you to Hull as a base for your practice?

A: The people were a major factor – we’ve never felt so supported and welcomed. And then we were oﬀered a great studio space by the Goodwin Trust which deﬁnitely brokered the deal because we almost live in our studio. We also proﬁt from Hull’s cheap living costs and the creative infrastructure that has been set up as a result of City of Culture.

We ﬁnd Hull visually quite inspiring – it does indeed feed what you called our ‘gothic glamour vibe, with a hint of the underworld‘! 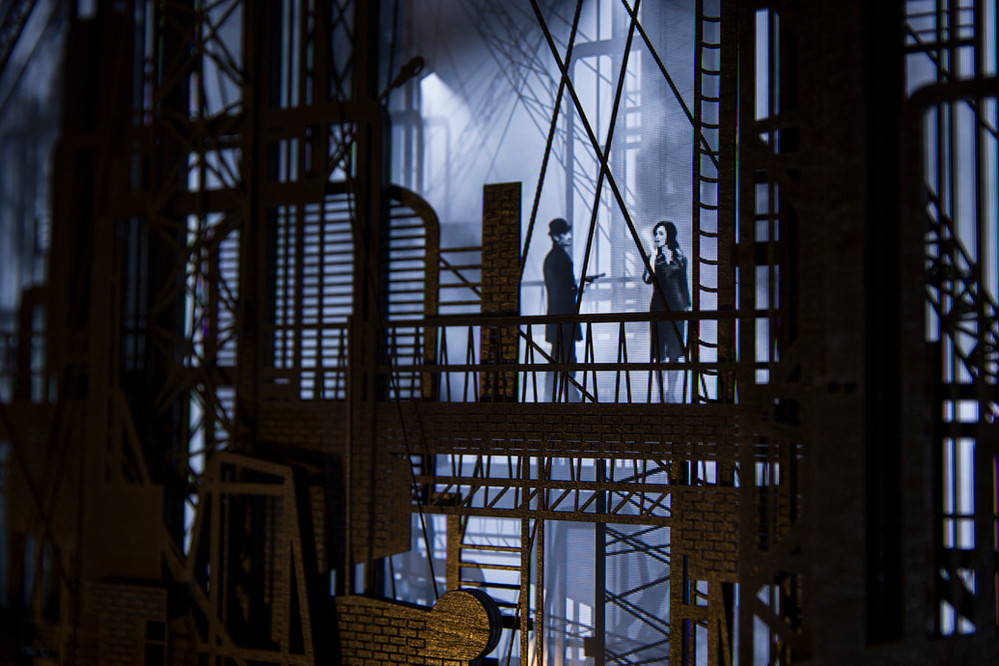 Q: Finally, what can we expect to see next from the McGuires?

A: We have just created a whole new body of work which is currently on display at Woolﬀ Gallery in London. It’s inspired by the seedy, shady underworld of Film Noir. Inhabited by gritty gangsters, femme fatales, exotic dancers and disillusioned detectives, these characters come alive within a series of intricate, animated, wall-mounted dollhouses that are deﬁnitely not for children. It’s a really exciting development for us and we’ll be making more of those pieces for collectors.

We are also currently discussing a new project for Hull towards the end of the year which will hopefully see some Micropolis characters return to a more central location.