Renowned British artist Michael Pinsky is big on conversation. There’s a good chance you will be too, when you visit the high-tech, interactive installation that he’s dreamed up to transform Hull’s iconic tidal barrier.

The City Speaks in the Fruit Market area is the latest major artist’s commission for the Look Up programme of public art.

It’s unique, exclusive to Hull, and it gives everybody the chance to see their spoken words translated into text and broadcast 16 metres high on to the city’s tidal surge barrier. And it’s operating 24/7 until 31 December 2017.

“What’s interesting about doing art like this in the public environment is it offers chances for people to meet that don’t require them to buy, to consume, that are not commercial moments,” says Michael. “They are not having to buy a coffee, for example.”

I like using art as a catalyst to start interesting conversations. This is what cities can offer and if we don’t offer these moments for free, we become ‘just’ consumers.
Michael Pinsky

The City Speaks works by using state-of-the-art Google speech-to-text technology. Your speech is picked up by a microphone inside a plinth on Humber Dock Street, which faces the tidal barrier at the opposite end of Humber Street. In almost in real time, your recording gets sent to a cloud with “masses of computer power”, then a combination of word recognition and grammar prediction allows your words to be projected on to the barrier.

Profanity filters are in place to try to catch any words that perhaps you wouldn’t want your nan, or your kids, to read. According to the artist, the technology is so intuitive that it will even begin to “learn” the Hull accent and dialect. The possibilities for the messages that will scroll up the barrier in the year ahead are endless. And Michael is a firm believer in the power of public art to get people talking, to spark debates, maybe even to bring people together. 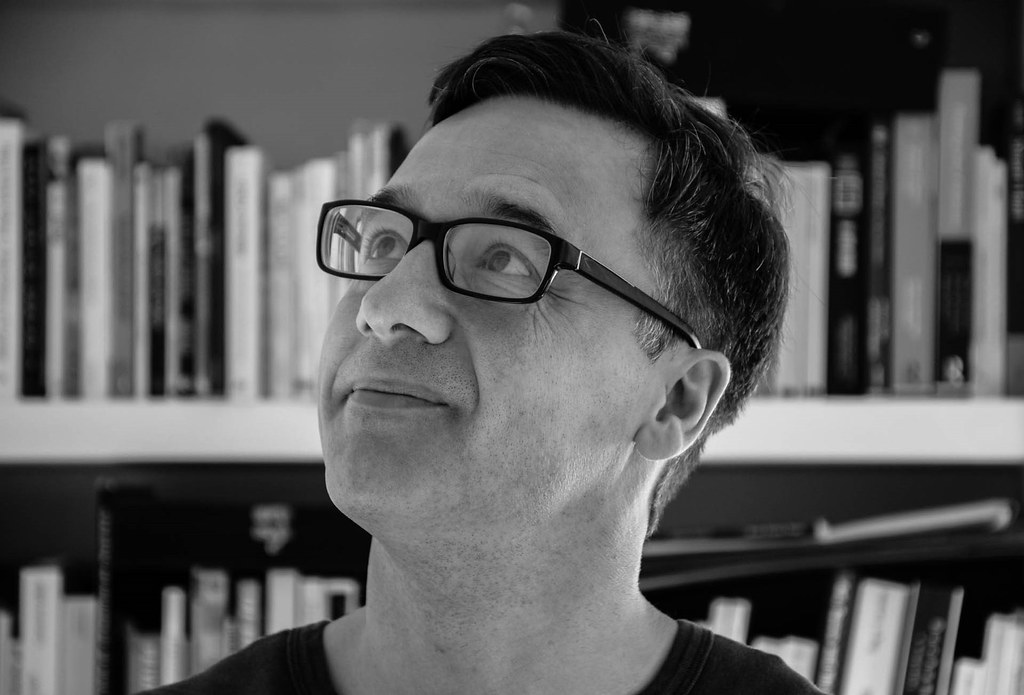 The idea of creating art with a civic purpose, rather than a financial purpose, is central to the work Michael Pinsky is renowned for all over the world. He describes himself not only as an artist, but also an urban planner, an activist, a researcher and a resident. His works of art, more often than not, are placed in the public realm – accessible, interactive and thought-provoking.

His previous work has been installed worldwide, from Tate Britain to the V&A; La Villette, Paris to the Baltic; the Armory Center of the Arts, Los Angeles, to the Rotterdam International Architectural Biennial. For a piece called L’Eau Qui Dort (2015/16) in Paris, for example, he collaborated with workers on the city’s canals, leaving lit objects such as shopping trolleys and bikes in the Parisian waterways, accompanied by haunting soundtracks made from those objects. And one of his most famous works,  Plunge (2012) in London, saw him marking the sea level where it will be in 3012 on to some of the capital’s best-known monuments.

Michael says: “A lot of my work is about issues around climate change, how we can improve people’s environments, or change people’s perceptions about the way they live, which is why it goes into the public realm. It’s about suggesting there are other ways of living rather than consuming, ever faster and faster. It’s also about interacting with art and having conversations with people, a good urban experience.”

I want people to use The City Speaks as a catalyst for something else, that I can’t yet imagine. The technology is just a device. The more imaginatively it is used the better.

He is obsessed, he says, with urban issues such as the flows of people through streets, lights and pavements in cities, and ways to revitalise areas.

“Fundamentally, design, these things we share in a public space rather than a private space, change our behaviours,” he says, citing two areas of the UK where he has seen this public art regeneration effect first-hand as a resident – Manchester and Kings Cross, London. “It instils a generosity into the grain of a city, that perhaps wasn’t there before, it’s quite forward-looking. When I lived in Manchester in 1987, there were vast areas that you wouldn’t walk in at night. You switch that all around to people outside having a coffee in the evening, kids playing, it’s a completely different psychology and it’s much better for people’s health.

“In Hull, one of the things that interests me about doing the work at Hull’s tidal surge barrier is the way the piece can draw people all the way through the city centre, on foot, down to Humber Street.”

Watching this unique installation evolve as the year goes on will be fascinating, says Michael. But what he’s most looking forward to seeing, is being surprised by the different ways people might interact with The City Speaks.

“I want people to use it as a catalyst for something else, that I can’t yet imagine,” he says. “The technology is just a device. The more imaginatively it is used the better.”