I’ve been asked if could expand on how and why I’ve co-curated many of the UK’s best hip-hop artists to come and play in my hometown, Hull, on Saturday 3 June as part of the Where Are We Now? Festival. I want to touch upon the names and significance of the incredible collection of influential voices ranging from the scene’s godfathers/godmothers to the current trailblazing rebel alliance making moves today so, here goes…

To set the scene, I was approached by Stanley Odd’s Solareye and Neu! Reekie!’s Michael Pedersen late last summer to ensure the local hip-hop contingent felt engaged with the festival and were given the opportunity to be involved – hip-hop is often referred to as a culture which is repped best when it is repped locally. The culture relies upon the credibility of content and a standpoint to which people can relate, which in many cases needs to come from the local perspective and learn something from their peers or exchange ideas. It’s the spirit of the maxim: Each one, teach one. Each one, reach one – which has been the essence of hip-hop since its founding through the Bronx River Organization in New York in 1973, and parties run from DIY sound systems put together by such music pioneers as DJ Kool Herc, Grandmaster Flowers and Afrika Bambaataa.

The foundations for co-curating Where Are We Now #2’s hip-hop programme with Solareye and Michael came from the title of the festival.

The mission was to think about who we wanted to be a part of this festival and why? It was never about just putting a few names featured on syndicated radio playlists nor looking for a few publicly recognisable personalities. The festival title asks a question and so the whole programme, inclusive of the hip-hop programme, was given the brief. We took this brief to mean that we should look back at Hull’s contributions to the world as a city, from the achievements of Ferens and Wilberforce who made a stand for their beliefs to pioneers like J. Arthur Rank and Amy Johnson.

Hip-hop is often referred to as a culture which is repped best when it is repped locally.

Therefore, the names we arrived at for Where Are We Now? had to be people who have changed the game, have something to say and are not afraid to provoke, ask questions and make their voices heard.  I also wanted to make sure that the line-up showcased the voices of the old and new, as well as representing Hull and the diverse mix of accents from all over the UK.

Hull’s hip-hop foundations include Redeye Feenix, the city’s first MC signed to a US record label through his deal with VOD Recordings. He has released music which has had a worldwide audience. DJ Fast T in his days as a dancer and a member of Hull’s Soulsonic Rockers created a move called the ‘stop and start’ or ‘ticking’ backspin, which has been popularised by numerous stars of the emerging extreme sports scene. Plus, Si2 is one of Hull’s original graffiti writers who has represented the city nationally for many years including painting provocative work about the prospect of Donald Trump being elected as the US President at Birmingham’s City of Colours Festival. 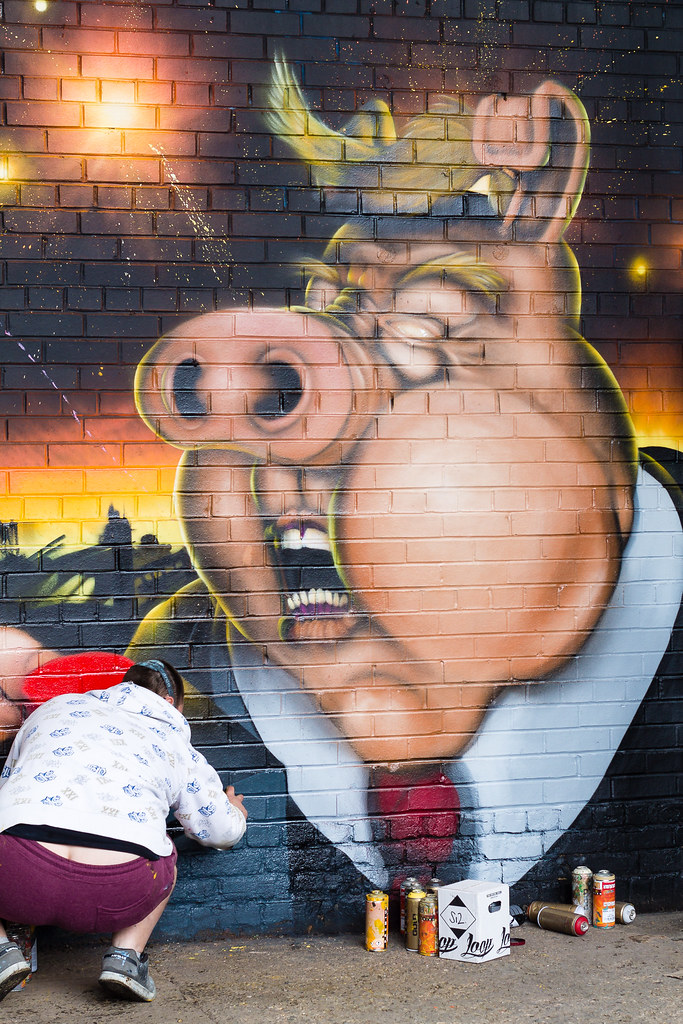 I don’t like to speak of myself, especially in an article I am writing on behalf of the scene, but I also contribute to world hip-hop. I am currently the leader and president of one of the culture’s original founding organisations, the Universal Zulu Nation, here in the UK. I am tasked with leading a chapter of like-minded and forward-thinking artists and community activists to create impactful projects to empower young people and to promote the culture.

The younger scene sees artists like Chiedu Oraka and Deezkid working with national artists, being featured on BBC 1Xtra playlists and playing Radio One Big Weekend. Hull’s number one battle MC, Chappo, has been representing the city all over the UK in battle leagues and doing the city proud. Newer budding talent like Cameo Brooks and Marx push up the work rate, taking the time to tour their music independently.

It’s great to be able to showcase some of these artists as part of Where Are We Now? through cyphers (improvisation jams) and performance .

Headliner Akala has a lot to say and a deep understanding of systems which foster institutionalised racism and history of revolutionary movements in Haiti and the British colonies, he shares this knowledge through his music as one of the UK’s most respected lyricists. He inspires younger artists to think about the impact they make with their content and to look further than a music career.

The Four Owls are a testament to independent success in the music industry through their work on the label High Focus, regarded as the premier label and vanguard of UK hip-hop music. The Four Owls have crystallized the true sound of UK hip-hop and have worked with producers such as the one and only DJ Premier (considered by many to be the greatest producer of all time in Hip-hop), who only makes beats for artists he likes and chooses personally. It’s a huge tip-off-the–hat from the US to the UK for that to come into being, and speaks volumes to the hip-hop community about the quality of their music.

A founder of the group Task Force and the M.U.D Family, an artist revered by UK hip-hoppers, Chester P’s poetics discuss the nature of current day politics and the absurdity of policy which punishes the poor and rewards the rich. He campaigns for the rights of the homeless and has created a movement of people to work together in helping those disadvantaged. His music not only is not only synonymous with UK hip-hop but it has always carried a message and has always challenged the status quo.

Another pioneering voice, Scorzayzee, who brings a critique of societal bulls**t in exchange for common sense and insight, his music has long been thought as some of the most forward thinking and intelligent and his stark and articulate method of delivering his message has attracted the attention of Parliament on several occasions. He challenges commercialism and hyper-capitalism, fast food and obesity epidemics and the history of Great Britain in the song of the same title, he discusses the slave trade, the IRA, corporate tax evasion, MP’s wages and poverty.

Amy True is one artist who has been making serious waves internationally, performing and touring in countries such as India and the Philippines and making it a mission to foster the next generation of female hip-hop artists through her A Woman Respect projects. Her content covers a range of social topics including growing up in today’s society, health, and drug abuse. She blends her vocalist skills with some of the most knowledge rich, lyricism being released in the UK currently.

Part of curating the festival required us thinking about which artists work together on a line-up and how their styles and content work together, or in contrast to each other, and so we added have voices like those of Booth Boxers and Ken Masters of Killamari Records.

Adding to that, the very talented Nikki Blaze, Tony Broke, Physics, Loki and Stanley Odd and we start to build a plethora of the best content, rich and distinctive voices in the UK.

It was a pleasure to put all of these people together to see how they use their own unique ways of sharing their opinions, and standpoints and their abilities to provoke conversation and debate around social issues whilst challenging various social norms, we’ve expanded past the static and sometimes standard forms of putting well-known names on a stage to perform.