£10 or £5 to WOW Day Pass holders. To book for this event at the discounted price as a WOW Day Pass holder, follow the instructions provided on your eTicket. Hull City Hall, Queen Victoria Square, Hull city centre, Sunday 12 March, 6.30pm.

Join us on the red carpet for WOW Hull’s closing event – a special screening of Gurinder Chadha’s Viceroy’s House.

Starring Gillian Anderson and Hugh Bonneville, Viceroy’s House tells the story of the last days of British rule as seen through the eyes of Lord Mountbatten, the last Viceroy and the person charged with handing India back to her people. Seventy years later, the consequences of that decision still reverberate through the region and impact global politics to this day.

The screening is followed by a Q&A with the film’s director, Gurinder Chadha and Amanda Nevill CBE, CEO of the British Film Institute.

Women Of Words: Spoken word performance with an all-female cast

Women Of Words is part of The Female Gaze exhibition.

Enjoy an afternoon of unorthodox literary pleasure and provocation with Women of Words, a monthly event for female performers of spoken word, prose, song and drama, open mic slots and special guests each month.

Icons is presented by Heads Up Festival as part of Women of the World (WOW) Festival, Hull (work in progress).

Based on Greek myths, Blazon’s Icons is a modern re-telling of Amazon warrior women. Displaced by war, a tribe led by four warrior sisters seek to settle where they can – until outsiders interfere. Fractured stories are brought together to rebuild an extraordinary and timeless world of sisters, survivors and strength.

Reassembled, Slightly Askew is presented by Heads Up Festival.

Follow one woman’s story of falling critically ill and her journey into rehabilitation with Reassembled, Slightly Askew. This unique autobiographical, audio-based work invites six audience members per show to lie on hospital beds and listen to the artist’s thoughts on her experience after being diagnosed with a rare brain tumour.

The audio technology makes the sound three-dimensional, causing listeners to feel they are inside Shannon’s head, viscerally experiencing her descent into coma, brain surgeries, early days in the hospital and reintegration into the world with a hidden disability.

A story of terror, discovery, humour, but above all, hope.

If you’re a Bowie fan you’re in for a treat this week as Hull Truck hosts a double screening of rare documentary footage of one of the most pioneering and influential performers of modern times.

The Look Up programme of temporary artworks created for the city’s public spaces and places continues throughout the year. 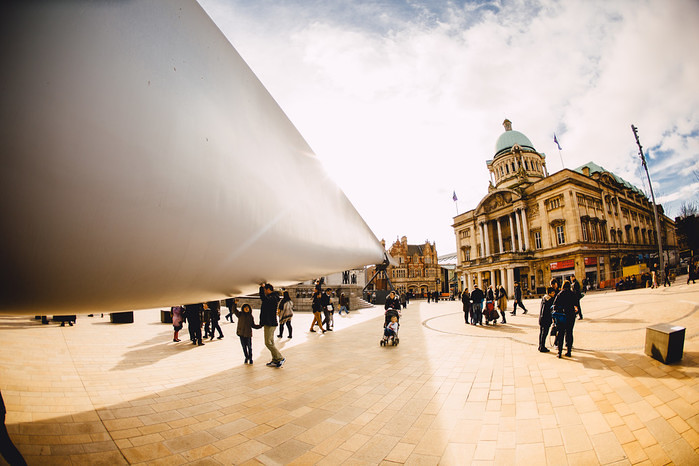