The photographs captured throughout 2017 provided many with a glimpse into the magic that surrounded our incredible programme of events. These snapshots of our programme were the work of a roster of talented local and regional photographers, including Tom Arran, Mike Bartlett, Patrick Mateer, Josh Moore, James Mulkeen, Chris Pepper and Sean Spencer, as well as Leeds-based creative company Sodium.

Now, their creations are being featured in 365, our limited edition, 200-page photographic book, designed by the award-winning Office of Craig Oldham. Whilst the content of the book is largely under wraps, we caught up with some of the photographers to find out which of the featured photographs put a smile on their faces.

Chris Pepper, as well as being instrumental in showcasing Hull and the surrounding areas, has been assigned to events ranging from John Grant’s North Atlantic Flux right through to Depart. 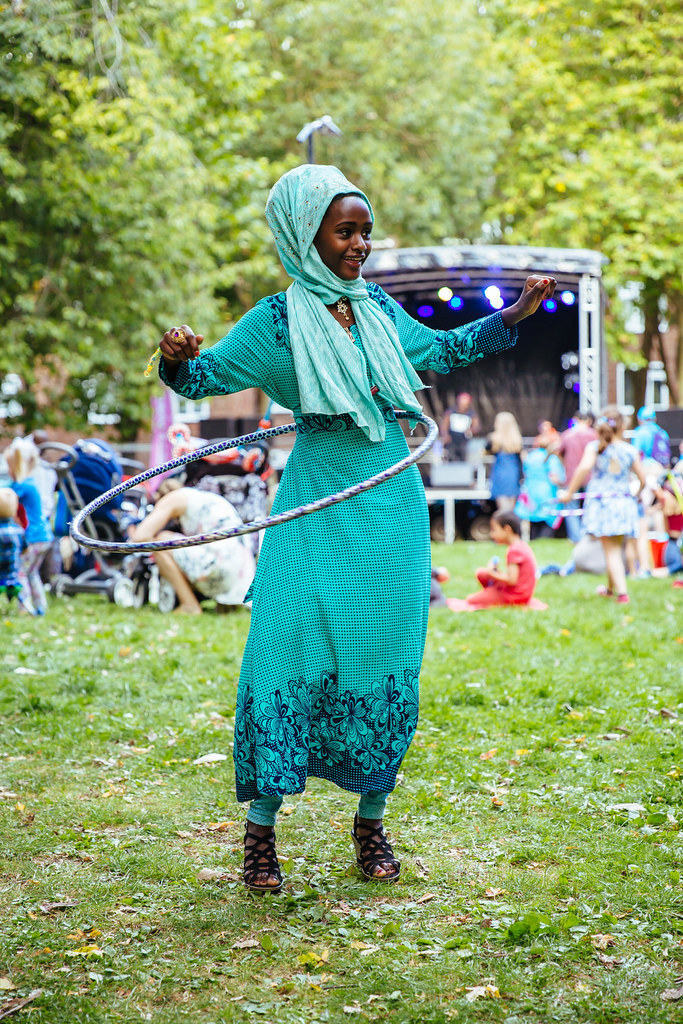 When asked about the image he had picked, Chris said, “I’m not sure who took it or where it was taken but I chose this one just for how simply nice the image is, well composed and framed and just a nice happy feel to it”. The image chosen was taken by James Mulkeen at Block Party, a Creative Communities Project. Block Party saw young people from five communities along the M62 corridor (Birkenhead, North Liverpool, Salford, Bradford and Hull) explore their creative roots and identities.

The book’s stunning cover photo was taken by Thomas Arran. You might have spotted Tom at a number of major 2017 events including Flood, Freedom Festival and BBC Radio 1’s Academy. Tom’s favourite photograph was from Humber Street Sesh, which saw music lovers of all ages descend upon Hull Marina on a sunny August day filled with live music, fun and laughter. 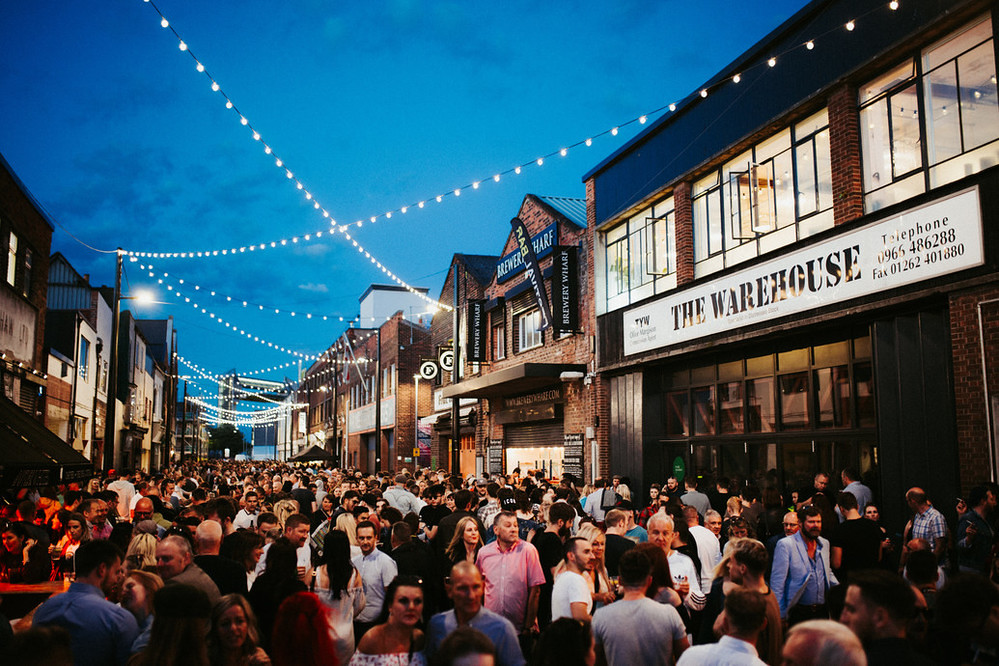 Tom said, “Humber Street Sesh was one of my favourite weekends from the entire year, seeing thousands of people around the newly refurbished Humber Street really was a great experience to photograph!”. This year Humber Street Sesh returns bigger and better than ever, with the addition of an extra day. The event will now kick off on the Friday night, followed by the usual excitement of Saturday.

There were four photographers working across our opening week, which included the jaw-dropping Made In Hull installation and the fantastic In With A Bang firework display. That week was a sign of things to come, creating some unforgettable moments people will share long into the future. 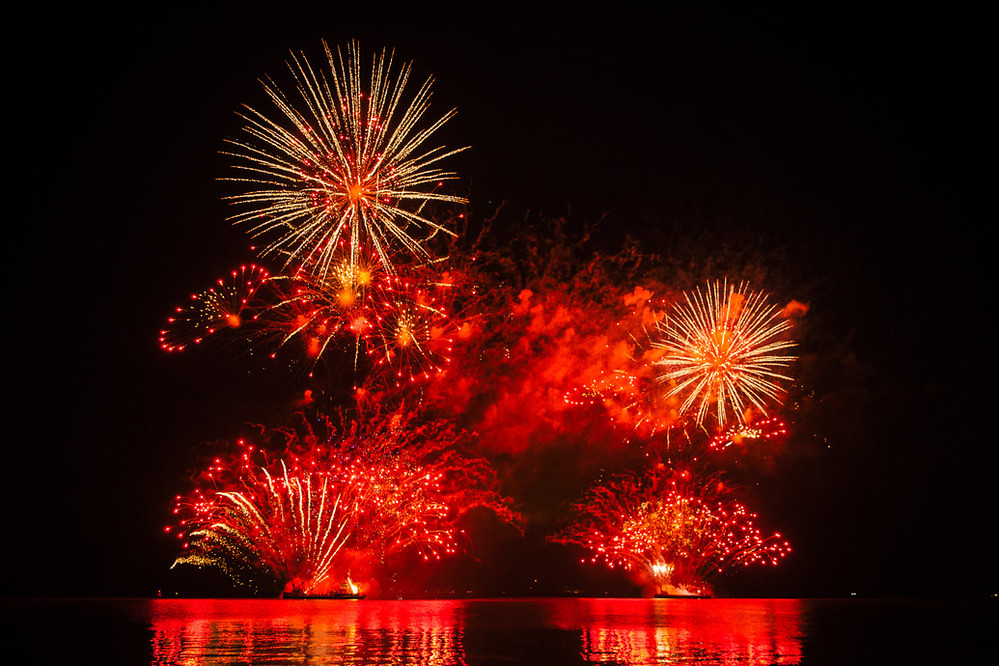 James Mulkeen’s vibrant image of In With A Bang was a favourite of his. “It was the start of something really special.  For Hull of course but also for me personally,” he said. James went on to photograph the Extraordinary Orchard Park Parade and The Royal Ballet: Opening the New, to name just a couple.

Another photographer who picked their favourite picture from the first week is Patrick Mateer. Patrick worked on projects including Back To Ours, Washed Up Car-go and Freedom Festival. His favourite image is one he took that captured the projections on the side of The Deep. 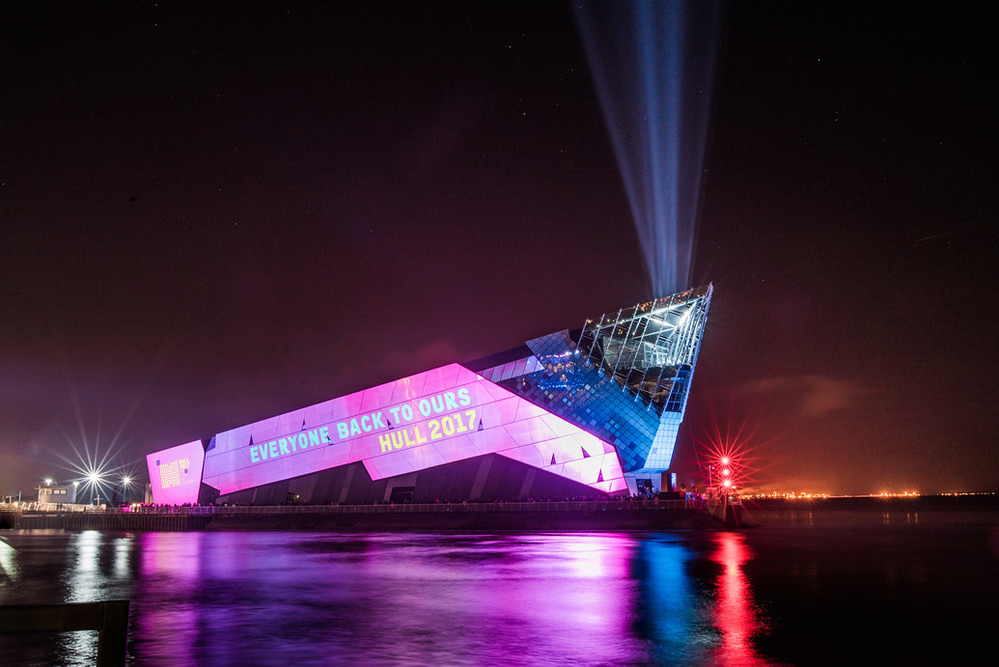 Patrick said, “This image of The Deep from the opening night is my favourite image of the year – this is simply for all the memories it evokes. It was such a freezing cold night waiting for the opening ceremony to begin, with a huge crowd and so much excitement all around. It was a night I’ll always remember as it marked the beginning of an amazing year for the city”.

Sean Spencer, a photographer who has taken photos of I Wish To Communicate With You, a light installation on the Thornton Estate, States of Play and many more, chose a shot from our exhibition Big Picture, one of two shows celebrating the 2017 volunteering community. 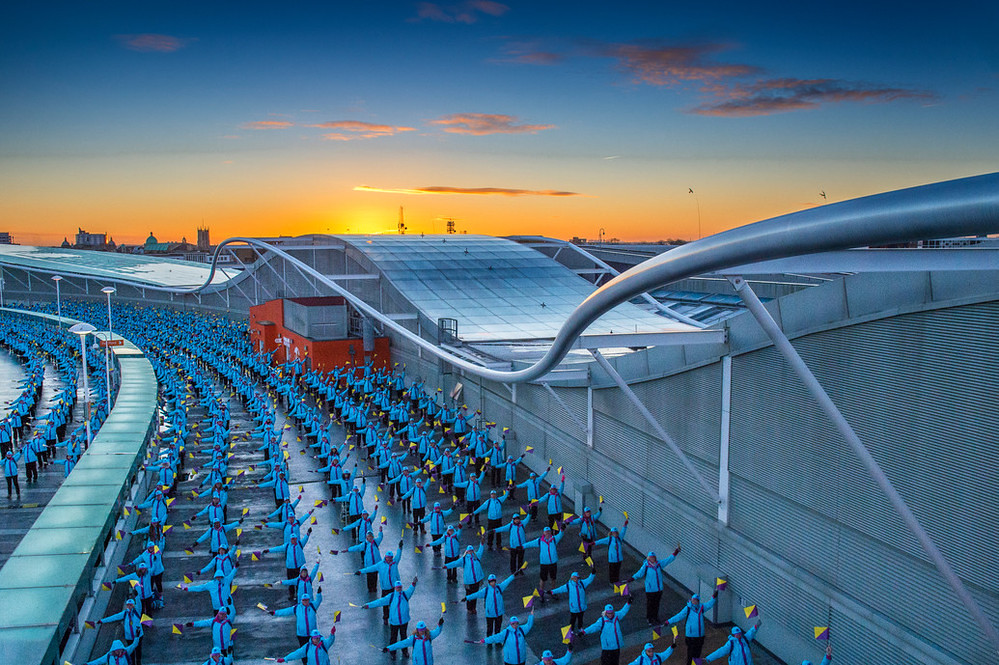 Sean said, “This picture would have taken meticulous planning by several people. I like the shape, the low light, the sunset and the city on the horizon. It would have been a good picture without the volunteers. With them and their vibrant blue jackets all disappearing into the distance, it makes it a great shot. Reminiscent of Spencer Tunick’s Sea of Hull – but with clothes”.

As well as all of these stunning photographs, 365 will feature a new poem written by Hull poet Shane Rhodes. All profits from the sale of the book will be used to help fund the organisation in its commissioning of new cultural events and activities in Hull as part of the legacy of 2017.

365 is being sold as a limited edition and costs £20, plus £2.95 p&p to mainland UK. It is available to buy online until Mon 26 Mar, and all orders will be fulfilled in the final week of March.