Magnum Photos represents some of the world’s most renowned photographers. Capturing everything from war zones to family life, its photojournalists have been creating iconic images since 1947.

This year, we asked two of Magnum’s leading photographers to create their own, unique portraits of our evolving city.

Martin Parr has explored the rich culinary culture of Hull, while the works by Olivia Arthur show the creativity of the city’s young people.

Together, these photographs, which will premiere at Humber Street Gallery in the exhibition Hull, Portrait Of A City, open a discussion as to how we define the culture, landscape and people of Hull.

Martin Green, director at Hull 2017, says: “We are delighted to welcome the work of Olivia Arthur and Martin Parr to Humber Street Gallery. It will be a major highlight in the first year of this new art space for Hull. Their observational approach, which is justifiably renowned around the world, provides two fresh perspectives on this extraordinary year for the city.”

Olivia Arthur’s black and white photographs explore the youth culture of Hull, from Elvis impersonators to pet snakes, football, bodybuilders, teenage style, relationships and young families. For this commission, Arthur has travelled frequently to the city to build relationships with its young people, enabling her to depict them in domestic interiors or the recreational areas where they spend much of their time. Arthur’s ability to build trust with her subjects has resulted in a series of insightful and honest portraits reflecting the individuality, identity and aspirations of the young people of the city at this crucial time in British history.

With humour and his trademark use of garish colours, Martin Parr has captured the rich culinary landscape of Hull. From classic fish and chips to patty butties, the infamous American Chip Spice and Hull Pie, European and specialist supermarket to the gastro establishments appearing along the regenerated Fruit Market – the city’s attitudes, traditions and enthusiasm for global cuisine are depicted in these photographs. Parr is known for his interest in British leisure and consumption, and this new series of more than 100 photographs depicts the importance of food to the character, social life and culture of Hull. 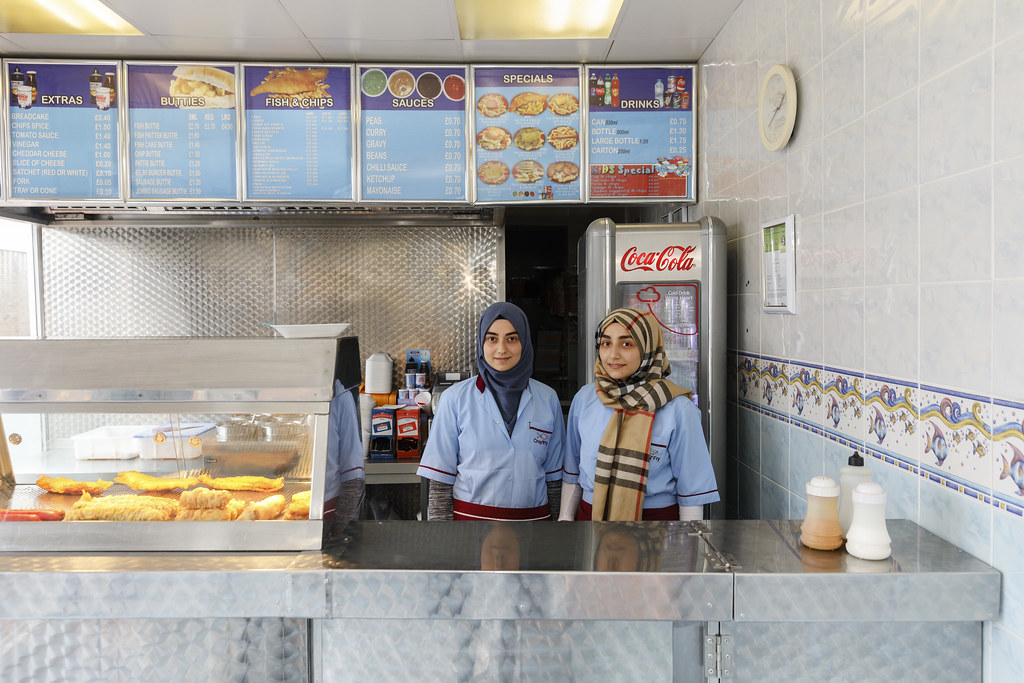 Olivia Arthur (1980) has worked extensively as a photographer in India and Italy, where a residency with design institute Fabrica led to a series of work about women and the East-West cultural divide. She has received support from the Inge Morath Award, the National Media Museum, and the PhotoEspaña Award for Human Values. In 2010, she co-founded Fishbar, a space for photography in London with Philipp Ebeling. Two monographs of her work have been published, Jeddah Diary in 2012 and Stranger in 2015. She now works in India, London … and Hull.

Martin Parr (1952) has developed an international reputation for his innovative imagery, his oblique approach to social documentary, and his input to photographic culture within the UK and abroad. His work has been the subject of numerous international exhibitions, most notably in 2002 when the Barbican Art Gallery and the National Media Museum initiated a large retrospective of his work which toured Europe for the next five years. Martin has published more than 80 books of his own work, edited another 30 and is also a judge in our very own Hull Beermat Photography Festival.

Hull, Portrait Of A City runs from 13 October to 31 December 2017 at Humber Street Gallery. Open daily, 10am-6pm (until 8pm on Thursdays). Admission is free.