If you think ‘girl power’ started with The Spice Girls in the mid-1990s, think again. Hull had already cornered the market with Mandy And The Girlfriends, one of the country’s first all-female beat groups, playing around the pubs and clubs of the city, and further afield.

“When we started in 1965, not all of the band could play their instruments,” says Karen Baker, keyboard player with Mandy And The Girlfriends. “All the venues in the city used to have a resident drummer, so we would borrow one until ours was ready. The audiences were maybe curious about us at first, but there were so many clubs in those days in Hull, we quickly became known on the circuit.

Going on to tour Germany and record an album, the band continued to perform, preferring life on the road to the chance to appear on talent TV shows such as Opportunity Knocks.

It’s an untold tale that has resonated with She Productions, an all-female theatre company resident at the East Riding Theatre in Beverley.

Rachel Barnes, who plays Karen’s counterpart in the production inspired by the band, It’s Different For Girls, says: “It was Andy Pearson at Ensemble 52 who told us about the story and helped us put on an initial performance at a scratch reading night. We loved the fact they were just a group of teenage girls who had an idea and ran with it. But we also liked the parallels between them and us as a young theatre company, working in what’s a very difficult industry with a lack of funding. They just said let’s do it ourselves and that’s kind of what we’re doing.”

The production isn’t a straight retelling of the band’s story, though.

“It’s inspired by their story,” says Rachel. “You always have to juice things up a bit for the purposes of drama.” The production centres on a fictional band, Sindy And The Girlfriends, but it’s the Girlfriends’s biography, written and published by band members, along with the band’s original scrapbook of photographs and press cuttings that gave the cast credit the grounding they needed in the era.

“We’ve also used lots of anecdotes The Girlfriends told us,” says Rachel. “We had a dinner party the first time we met them and it’s interesting how we just clicked, all of us are naturally quite similar to the people we play.”

As you’d expect, music plays a large part in the production. Just as the band had to learn their instruments in the 1960s, the cast members had to get to grips with theirs. “Like Karen, I also played the keyboards before we started,” says Rachel, “so that’s a nice parallel, but the difference is that about half the songs in the production are original material. The Girlfriends only played covers, but it’s another challenge for us.” 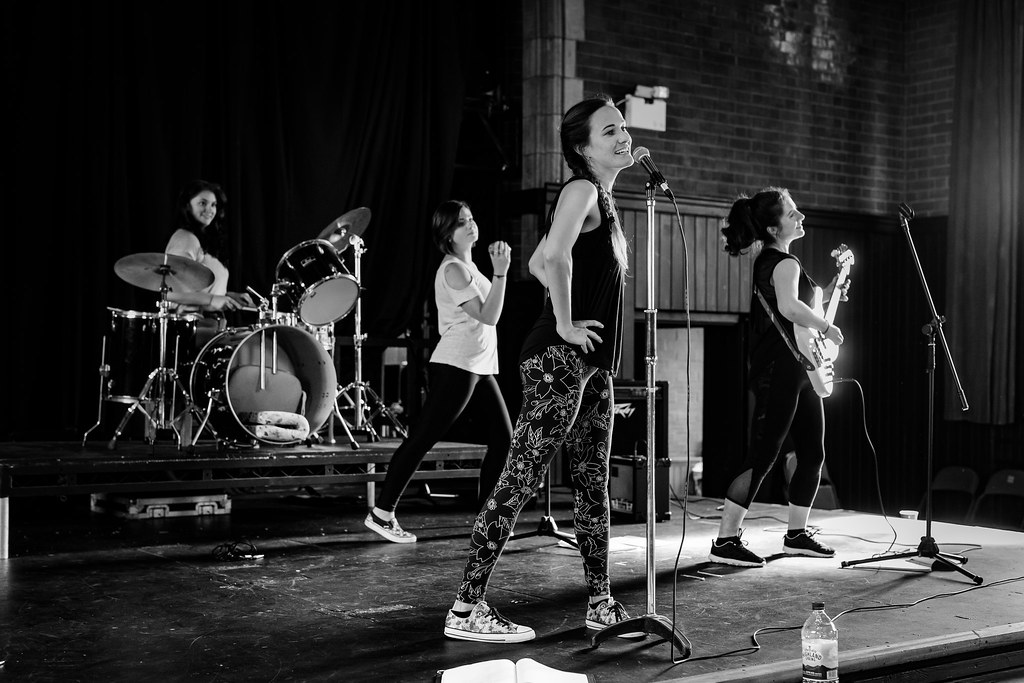 The urge to make music clearly hasn’t been diminished by the passage of time for the original Girlfriends.

“We made our first demo disc in Fairview Studios more than 50 years ago,” says Karen, confirming that the band is returning there to record again. “It’s where we started and where we’ll probably finish. We don’t expect it to go viral, but we’re hoping to make it available for people to listen to.”

It’s Different For Girls runs from Wednesday 6 September to Saturday 23 September, and the original Girlfriends can’t wait to see it.

“The whole thing feels weird, but in a good way,” says Karen. “We’ve only seen the first part of the production so far, but I’m coming along to see it with various parts of my family. My granddaughter is 22 and she thinks it’s great. Being in a band was a novelty for us in the first place, but we just loved doing it. Times have changed and it was such a long time ago now, but looking back on it still brings a lump to my throat.”