“War tears people apart. It tears families apart. The women I meet are torn from their homes, their lands and, even if they find relative safety, they are often torn by the guilt of leaving loved ones behind, torn in many different ways. The sexual violence that is a tool of war physically tears women – and very young girls – apart. I’ve heard women repeat the word ‘torn’ again and again, so many times. No matter which war, which country, which moment in time.”

Documentary photographer and journalist Lee Karen Stow has spent 10 years uncovering women’s stories that have been largely forgotten, silenced, or ignored, from the First World War to the present day.

Former commander of UN peacekeeping forces Patrick Cammaert stated in 2008: “It has probably become more dangerous to be a woman than a soldier in armed conflict.”

In 2017, Human Rights Watch reported that: “Throughout history, women and girls have often been targeted in wartime for violence, especially sexual violence. They have also been excluded from conflict prevention and resolution efforts.”

And yet according to UN Women violence against women in conflict remains “one of history’s great silences”.

During Sierra Leone’s civil war, 94% of displaced households had experienced sexual assaults, torture or sexual slavery. Between 250,000 and 500,000 women were raped during the 1994 genocide in Rwanda.

It’s a pattern repeated in war zones the world over and actual figures are acknowledged to be much higher than the statistics reported. Now, in 2017, the Rohingya people – especially women and children – fleeing Myanmar are facing brutal and ongoing atrocities. Although awareness is improving, these are, Lee says, the forgotten women of war.

Through haunting photography of iconic poppy petals, soundscapes that Lee recorded on former battlegrounds, and textiles created by members of Hull Women’s Refugee Group, she gives war-torn women a voice.

The stories are always the same, it’s just the geographical location that’s different. But what is more compelling, is how these women have coped, have managed to rebuild lives.

The poppy petals in Torn represent the women who have survived war zones, genocide and conflict, whose bodies have become the battlefield, and those who have picked up the pieces during and after conflict. They are survivors from the killing fields of Cambodia, the bombed streets of Aleppo, from Hiroshima and women who survived the Holocaust.

“All the way through,” Lee says, “from researching women’s eyewitness accounts, to learning more about the conflicts of today… it hit me. The stories are always the same, it’s just the geographical location that’s different. But what is more compelling, is how these women have coped, have managed to rebuild lives.

“It is so deeply important to hear how people cope, how they get on with it. So Torn, I hope, pays tribute to the inner strength and resourcefulness demonstrated by so many women I have had the privilege to meet.”

And wherever she was in the world, whatever trauma the women she met were recovering from, Lee found a recurring line kept coming up in her conversations: “You just get on with it, don’t you?”

For Lee, who grew up on east Hull’s Greatfield Estate, it all began in Hull’s twin city of Freetown, Sierra Leone, in 2007. Curious about how women in war-torn countries survived, she set off to deliver a fortnight of photography workshops to women in the aftermath of civil war.

“Women were queuing up outside the door,” she says. “I couldn’t understand it – when I held workshops in Hull at that time, I’d hardly get anyone, but there, people wanted to learn a skill and wanted to become part of a digital world while rebuilding their lives in the aftermath of a civil war. Anything they felt would help lift them out of poverty.”

Francess Ngaboh-Smart [pictured] was one of Lee’s graduates from that first Sierra Leone workshop. Her story also unwittingly helped inspire the poppy motif that runs through the Torn exhibition. 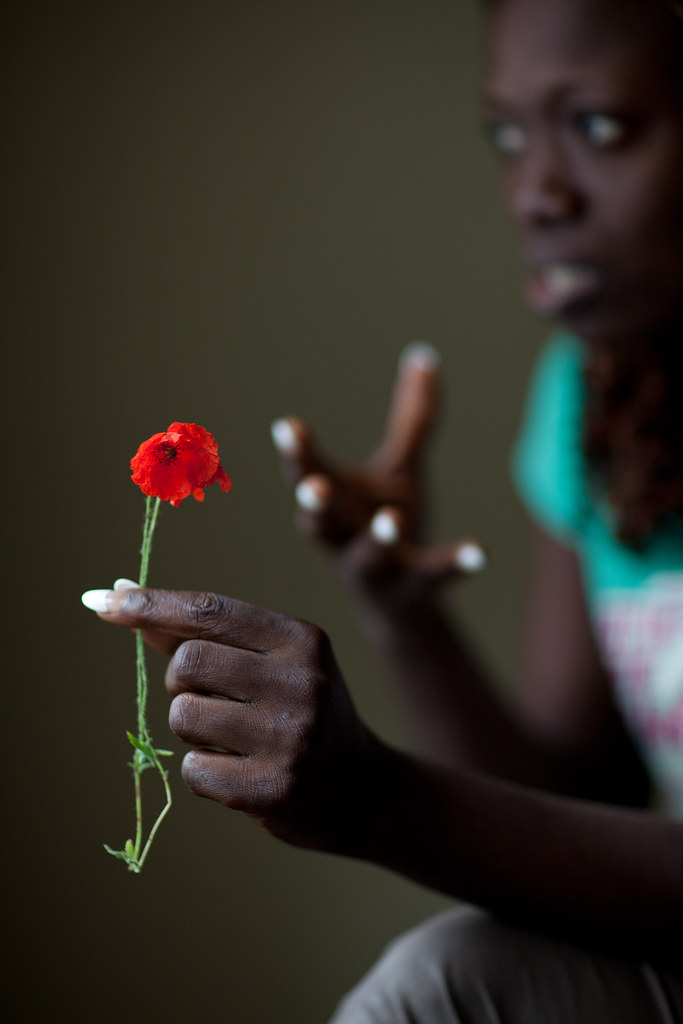 “One day, Francess was visiting me and she started telling me her experience of being a 15-year-old girl in her village,” says Lee. “She saw her neighbour decapitated. She saw awful things, very graphic and while she’s telling me this story, she’s holding a poppy.”

Apart from its significance as a flower of remembrance – instigated, incidentally, by two more forgotten women – Lee explains why the poppy felt particularly significant to this project: “The poppy grows where everything else has been destroyed. When it’s been exposed to trauma, and it’s exposed to light, it grows tall.

“This resilience reminded me of the women of war and conflict I have met, interviewed and photographed over the last decade. So I put all of this together, using the poppy flower as a metaphor for the experiences of largely forgotten women of war.”

With Lee’s help, Francess got a work placement with National Geographic, and she now lives in the Hague, where she works for the UN Special Courts.

Inspired by such strength in adversity, Lee first began to make the connection between cornfield poppies to the women of Sierra Leone, who she was photographing for another project, then to women in other countries.

The poppy grows where everything else has been destroyed. When it’s been exposed to trauma, and it’s exposed to light, it grows tall.

With the sale of her first work in the Torn series – to Cambridge University – Lee bought a ticket to Japan so she could meet women survivors of Hiroshima. In Cambodia, she met survivors of the Khmer Rouge; in Vietnam, everyday women who became soldiers in order to defend their homes, but fought every day, in battlefields that were all around them.

On the West Bank of Palestine, she photographed two women, one Israeli, one Palestinian, who had each lost a son. She researched the women of the First World War so she could tell their stories, and met Holocaust survivors now living in the United States.

Lee says: “What really brought it home to me was talking to women who survived the genocide of the Khmer Rouge in Cambodia. They had to rebuild their lives. Many of the men had been killed, so women had to pick up the pieces, find an income and look after families.

“The women there told me that the first thing they had to do after surviving the killing fields, was to find a cooking pot and a spoon so they could feed their families.

“And I think that’s why we don’t hear so much about women’s stories in relation to war. I think women are too busy ‘getting on with it’ to tell anyone their story.

“Even today, on the site of the killing fields, heavy rains still bring the rags of clothes people were wearing when they died to the surface and you will see people collecting the rags. One of the photographs in Torn is called Rags to reflect this.”

There are also plenty of stories closer to home.

“Even mam started telling me about her Second World War experience for the first time,” says Lee. “She wasn’t evacuated like many children in Hull, so her experience was of hiding under tables, getting covered in dust from explosions. And when I asked her why she’d never mentioned it to me before, she said: ‘Well, you just get on with it, don’t you?’”

Lee volunteers with Hull Women’s Refugee Group and women from the group have played a part in Torn by making textiles for the exhibition that represent their journey.

Some such as Huda from Aleppo, Syria, was in Hull visiting her son – and while she was here, the airfield fell. Back home in Aleppo, she was a very successful businesswoman, who ran her own pharmacy and owned a large property. But while she was away, people took her car, then her house.

“Huda is part of Torn because, despite losing almost everything she has managed to build a new life in Hull,” says Lee. “There are a million Hudas out there.

“There’s Arafa from Darfur in Sudan, who is also taking part in Torn – Arafa is a survivor of refugee camps, who fled and managed to keep her family together and start again. There’s Ayak, who fled South Sudan for a new life in America when her life was in danger. She escaped to safety but she had to leave her mother behind.”

Lee says she originally thought that Torn would represent the end of a decade of interviews and portraits with 70 women, having read hundreds of testimonials and first-hand accounts, and visited locations of war, conflict and genocide. To show how women everyday are being affected by war, conflict and genocide and how they are coping with the trauma and the aftermath. “I’m realising now,” she says, “that this piece of work merely scratches the surface of what’s really going on out there.” She pauses: “You just get on with it, don’t you?”

TORN is at Humber Street Gallery from 6 Nov to 31 Dec 2017. It is a collaboration with sound artist Hayley Youell, textile artist Liz Knight and members of the Hull Women’s Refugee Group, and the culmination of Lee Karen Stow’s documentary project and exhibition Poppies: Women, War, Peace that was part of 2014’s First World War Centenary.

Read more about the UN’s work to amplify the voices of women in conflict.