If you’ve visited festivals like Humber Street Sesh, you’ve probably been blown away by the likes of LIFE, Bud Sugar, The Black Delta Movement and a plethora of other (brilliant) male-dominated bands. You might not have even noticed the distinct lack of females on the line-up, but if you take a closer look, it’s difficult to miss.

This is not the work of some anti-female festival organiser. The problem is, there simply aren’t that many female-fronted bands and musicians in our scene, or climbing through the ranks to nab those all-important headline slots. That’s not to say there aren’t some kickass women doing great things in the scene – sister doom duo Chambers, Lyn Acton and Sophie Hodson of Pearls Cab Ride and Claire Scott of The Evil Litter are just a few that spring to mind.

But the ratio of male to female bands in Hull is disproportionate, something that is mirrored across the UK, as shown in a 2017 study which revealed that around eight out of 10 festival headline slots were occupied by all-male acts.

So what can we do on a local level to diversify our music scene? We caught up with Rosie Collins, Yaz Watson, Megan Thundercliffe, Jazz Harbord, Yssi Wombwell and Philly McAndrew who, along with Katie Hayes, are behind Make Noise – a collective that has been set up to do exactly that.

HOW DID MAKE NOISE COME ABOUT?

Rosie: We decided to create Make Noise following discussions about how the visibility of women in Hull’s music scene was not good enough. We think that it’s related to a lack of encouragement and also a feeling of intimidation when entering rehearsal and recording spaces.

Alongside that, many of us shared experiences of sexual harassment at gigs, which only makes those feelings of intimidation worse. So we decided that somebody needed to do something about it, and work with venues to make them safer for women, whilst also encouraging more women into music.

We’re still in the early research stages, so that’s why we are hosting our Open Meeting on Wed 21 Feb to hear from women across the city about their experiences, which we hope will drive our work. 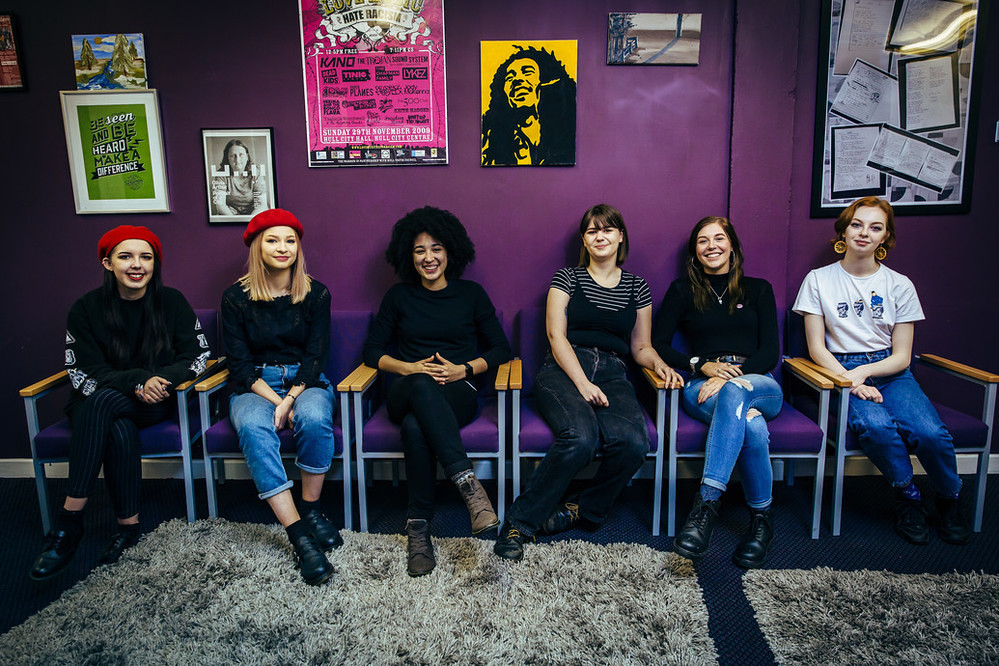 TELL US ABOUT THE ISSUES WOMEN FACE WHEN LOOKING FOR OPPORTUNITIES IN MUSIC.

Megan: As somebody who has been interested in starting a band before, I’ve struggled to find that many opportunities that are directly for women, other than what is being offered at The Warren at the moment.

I felt quite self-conscious about going into that male-dominated space because when I’ve mentioned starting a band to guys, they have responded by laughing and saying, ‘why don’t you actually learn an instrument properly first?’. That doesn’t happen to guys, they get to learn as they go and nobody judges them for it.

There seems to be a fear of being loud and angry in music if you’re a woman.

Yssi: There is also less room for women to make mistakes in music. We’ve heard from women who have tried to learn drums in the studio, only to be bombarded with guys trying to tell them how it’s done. It’s meant in a nice way, but if somebody is already feeling nervous it can be too much.

Jazz: It’s difficult to find that many female role models in my style of music, because a lot of the women in the local scene seem to be more acoustically driven. There seems to be a fear of being loud and angry in music if you’re a woman.

Rosie: We’d like to make safe spaces for women to pick up an instrument for the first time, rehearse and record in, or even start a band, without feeling that intimidation. And shine a spotlight on the women already doing that in Hull.

Amazing speech from Haim the other night at the NME Music Awards. ➡️"@haimtheband Music shops, venues, and studios should all be safe spaces for women to be able to be creative and feel like equals. To anyone that identifies as a girl, we’ve been there and we support you always."

WHAT ABOUT AT VENUES – WHAT STORIES ARE YOU HEARING FROM WOMEN ATTENDING GIGS IN HULL AND ARE VENUES DOING ENOUGH TO HELP?

Megan: Let’s start with mosh pits, because I love a good mosh pit after a few drinks, but often get pushed out of them and ignored by the guys in the pit because they are too afraid to hurt me. I know the risks when I go into one but it sucks when you can’t join in with everybody else because of stereotypes some people have that women shouldn’t be there.

Philly: Personally, I have seen sexual harassment – inappropriate comments and touching – happen in music venues, but it’s not viewed as seriously as fighting or underage drinking. Security staff have said things like, ‘I didn’t see it happen so I can’t do anything about it’, yet if somebody reports a fight the people involved are thrown out immediately.

Going to gigs in Hull, you become aware of individuals who are known to say and do inappropriate things and you warn each other about them. It’s insane that you have to do that.

Rosie: As a young woman going to gigs in Hull, you become aware of individuals who are known to say and do inappropriate things and you warn each other about them. It’s insane that you have to do that, and that girls have to have each other’s backs or avoid certain places when venues are not protecting them.

Yssy: At the moment, venues are not doing enough. But we want to work collaboratively and not in an accusatory way so that they can adopt zero tolerance approaches on sexual harassment and train staff on how to deal with it.

WHAT CAN PEOPLE EXPECT FROM THE OPEN MEETING?

Philly: We don’t see ourselves as having the ultimate viewpoint for all women across the city, so we’re going to start by handing out a questionnaire that gives people the opportunity to tell us about their good and bad experiences of attending gigs in the city.

We also want to know what’s currently stopping women from getting involved in music, and what changes they would like to see. Then we hope to use this information to work with venues to improve safety and inform our future activity.

It’s easy to feel like you’re going crazy when you experience (these things), but it’s good when you realise you’re not alone…we just want to generally vibe off of each other.

Rosie: We have Girls That Gig coming down, who are a group of people doing similar work in Leeds. They will talk about what they have achieved and give us some fresh ideas about what we can do in Hull. Then there’s our panel with Emily Dawson, Hannah Lutkin and Ali Hubbard, three women who have done great work in the music industry and can share their experiences of getting into it.

Megan: It’s easy to feel like you’re going crazy when you experience sexual harassment at gigs or feel intimidated in music spaces, but it’s good when you realise you’re not alone. We just want to do a lot of talking and listening, and generally vibe off of each other.

WHAT’S LINED UP FOR THE FUTURE?

Yssi: The Open Meeting will inform a lot of that, but we’ve already talked about starting a blog where we invite women to write think-pieces, putting on workshops about playing music and promoting your band and approaching venues to find ways of working together. There’s also talk of putting gigs on further down the line.

Make Noise will host their Open Meeting at The Warren on Wed 21 Feb from 6pm to 9pm. Follow them on Facebook and Instagram to find out more.