From rock’n’roll and big band jazz to experiments in musique concrète, Basil Kirchin was a lifelong musical innovator.

And a new release this month, thanks to Kirchin aficionado Jonny Trunk, proves yet again that this quiet man from Hessle Road in Hull was a tirelessly innovative musical genius.

Silicon Chip, an uplifting proto-funk number, was recorded in 1979 at Fairview Studio in Willerby, East Yorkshire, just down the road from Hull. This legendary studio is where Basil, alongside owner Keith Herd, took tape recording to the next level and opened up a whole world of new sonic experiences.

Best known for his mind-melting experiments in sound throughout the 1960s and 1970s (check out Worlds Within Worlds), Silicon Chip sees Kirchin try his hand at lyrically driven funk that reflects on the tech revolution to come. 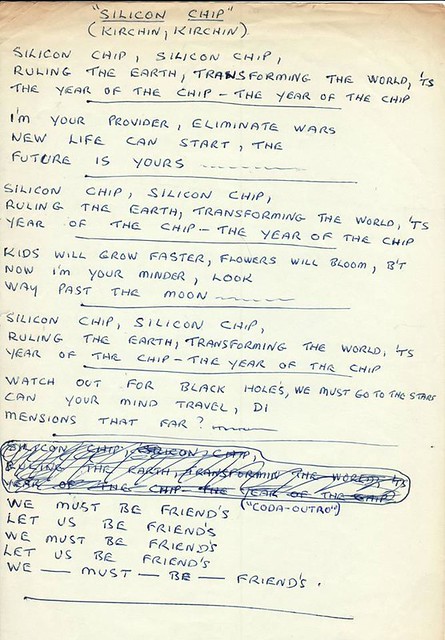 Kirchin’s handwritten lyrics to Silicon Chip. Thanks to Matt Stephenson at Nova Studios.

Silicon Chip is available through Trunk Records on a limited edition yellow vinyl pressing EP, and the track can also be heard on Perfect Combination, a Fairview Studios compilation.

Find out more about Mind on the Run: The Basil Kirchin Story and get tickets here.