The Power Of Film: How Indie Cinema Took On A Year Of Culture – Visit Hull
Skip to content

I’m talking to Damien Greco, co-founder and programmer of Hull Independent Cinema (HIC), about the city, and how through Hull’s year as UK City of Culture 2017 an underground indie programme has ramped up film culture to reach new audiences and celebrate cinema.

Damien was born and bred in Hull, has lived in the city pretty much all his life, and is passionate about keeping alive the independent spirit that runs through it. From his very first job as a projectionist to HIC, Damien has been enthusiastically sharing his love of indie, art house, world and foreign film with an audience as dedicated to discovering something different as he is.

It all started some six years ago, where Damien explains “At the time, I was running a cult movie night that had been going for a few years and was really successful; I knew there was an appetite in Hull for something more.” Damien then discovered someone else in the city running a movie night and with a desire to open an old building in the city as cinema – Paul Terry.

Together, realising that there was an existing market for alternative film, they brought in more like-minded film enthusiasts and set up HIC. “I had that experience of knowing that you could start something from fresh, and that people would come to it if you did it right. The people in Hull are very open to new cultural pursuits, particularly those with an authenticity and integrity.”

This has been proven in 2017, as HIC saw audiences quadruple compared with 2016. Damien continues, “We knew that Hull 2017 was going to be a fantastic opportunity for us to introduce even more people to specialist film and to Hull Independent Cinema – but we never imagined the response we actually received.

“Over two thousand people came to our Hull Film Festival last year. We had our biggest programme including a UK Premiere and an outdoor screening. For many it was the first time they’d ever considered independent film, and now here they were embracing us as part of the city, telling their friends, and coming to multiple screenings.” 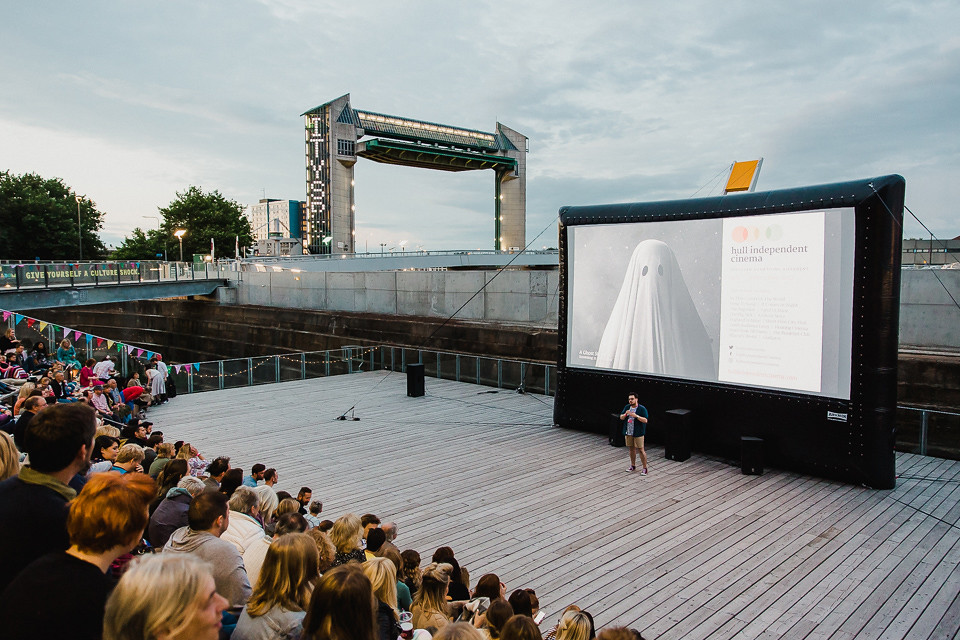 This success was supported by BFI through ‘Transformative Film Culture for Hull’, a strategic investment for the City of Culture film programme, delivered by Film Hub North, part of its National Lottery-funded BFI Film Audience Network. The investment is reflective of the BFI’s activities across the UK to bring film to audiences where there’s less opportunity to experience and engage in film, supporting local film networks and audience initiatives.

This presented opportunities for HIC to dramatically expand their audience and programming. “We started the year with a project in partnership with Sheffield Doc/Fest and Yorkshire Film Archive called “Hull on Film” which sold out, twice!

“We also worked with Doc n’ Roll Film Festival and screened music documentaries from all over the world. Being part of Hull 2017, and being supported by the BFI, has taken us to a whole new level. To have the industry, as well as the city, recognise the importance of indie cinema in Hull has definitely broadened our ambitions for the future.”

HIC has filled a (rather large) space in the hearts of both its founders and its audience, “I’m so pleased that Hull Independent Cinema is available to us,” Karen Riggall, now a HIC regular tells me. “We’re able to see films that we wouldn’t be able to see otherwise.” Although she says she can’t quite remember how she and her husband found HIC, they are glad it’s here to stay. “You wonder why people just sit and watch rubbish on the telly when they could go and see a really good film, here in Hull,” concludes Karen.

James Rowson, another fan of HIC who works at the University of Hull, recalls, “Before the City of Culture there wasn’t a huge amount in terms of different things to do,” but with the investment, passion and cultural diversity that Hull 2017 brought, James along with thousands of others, found it much easier to hear about and attend cultural events, in this case, specialist film: “I saw a Hull Independent Cinema event for a film that wasn’t something usually released in our mainstream cinemas, and I thought I’d give it a go. It was really well put together, so I just kept going back.”

Audiences to HIC screenings have been growing year-on-year: In 2014, 608 people attended 20 screenings; in 2017, there were over 10,000 people across 160 screenings.  The team’s first screening of 2018 (The Florida Project) was a sold-out event, proving that HIC’s dream to win the hearts and minds of Hull’s film-fans or not, is being realised.

It is this open-minded, progressive, friendly nature that first attracted the HIC’s coordinator, Ellie Irwin to the city. Originally from Canada (read about Ellie’s move in more detail here), Ellie ended up in Hull by way of London. “I found it really easy to integrate myself here and to become part of the community,” Ellie confides. “There was a real vibe in the city, similar to that of Vancouver, of people being proud of where they’re from.”

Ellie lived in Vancouver during the 2010 Olympics and distinctly remembers feeling instantly swept-up in the pride and energy of Hull.  Despite its new-found place on the international stage, “it’s still an independent city,” Ellie continues “in that a lot of the businesses are still owned and operated by people who are from Hull, there is a sense of community, but one that is open to all, and focused on the future.”

Currently, Ellie is HIC’s only paid member of staff. The rest of the team (Damien, Paul and three others) work on a voluntary basis on weekends, evenings and whenever else they can fit the project in. Damien says: “We’re a dedicated team. We’re doing it to make sure these kinds of films are shown in our city.” For Damien and the team, HIC is not just about people going to the cinema to watch a film, it’s about “discovering new and different stories from around the world and watching films in an environment that champions the film-watching experience: big screens; great sound; an attentive audience.” 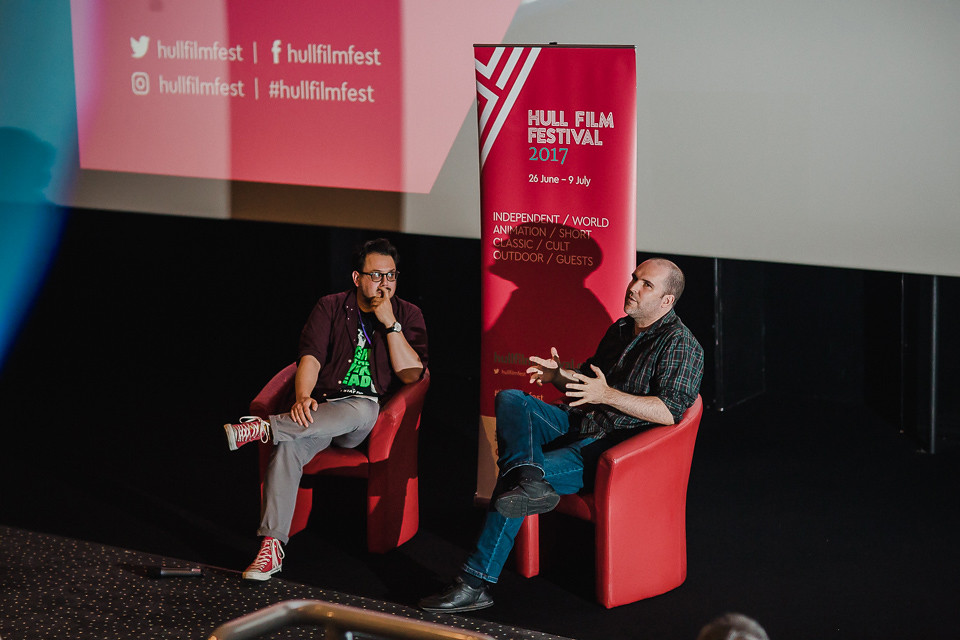 In the future, Damien, Paul and the whole team would love to have somewhere to call ‘home.’ Somewhere with a café bar where people can come in and hang out, knowing they’re in a “warm, friendly environment of people who just want to see a good film.”

But for now, the team are content with welcoming more and more people to HIC screenings and events. “There’s no let up for us after 2017!” Damien exclaims. “The City of Culture continues! In 2018 we are partnering with Back to Ours festival in which we’re taking films out into Hull, touring outside of the city centre, in the suburbs and communities that make Hull, Hull!”

If 2018 is the year you decide to explore film in Hull, then the line-up is rich and varied. This season HIC have cult classics, silent films with live music, short films, and the Oscar nominated Three Billboards outside Ebbing, Missouri. “We’re looking forward to the fifth edition of Hull Film Festival, and Doc n’ Roll Film Festival will also be making another appearance,” summarises Damien.

Such is the impact of HIC, that the attitudes of the big venues (Cineworld, Vue et al) are beginning to show acceptance of the off-centre; the quirky; the unique. “I’ve started to notice that we’re getting maybe a week or two of showings that, prior to HIC, I don’t think would have come to Hull at all,” James Rowson observes. It’s interesting that the mainstream cinemas appear, in James’ opinion, to be taking a punt on things that, otherwise, they might not have.

With their film-forward attitude it seems HIC are making a big difference to the cultural landscape of Hull. Through the power of film, Hull and its people are ensuring their independent spirit lives on.