Louise Dempsey is a final-year student on the BA (Hons) Games Design course at Hull School of Art and Design (HSAD). In April 2016, Louise was given a rare opportunity as lead designer on a breathtaking digital commission by the Maritime Museum.

The brief? Create an audio-visual installation of the mighty Bowhead whale, highlighting Hull’s whaling heritage and offering an insight into the life of the species at the centre of Hull’s whaling industry.

With Bowhead now in full swing, we speak to Louise to find out how it’s going:

Where do you begin on a project of this scale?

After meeting the creative team, including Robin Diaper who is the curator of the Maritime Museum, it was straight on to research, research and more research.

I was taken on a tour of the museum and was supplied a tonne of information and images to work from, so I now know more about whales than I ever thought was possible.

Fun fact: A Bowhead whale’s throat is smaller than a baby, so they can’t swallow humans. They can fit us in their mouths, but they can’t eat us! 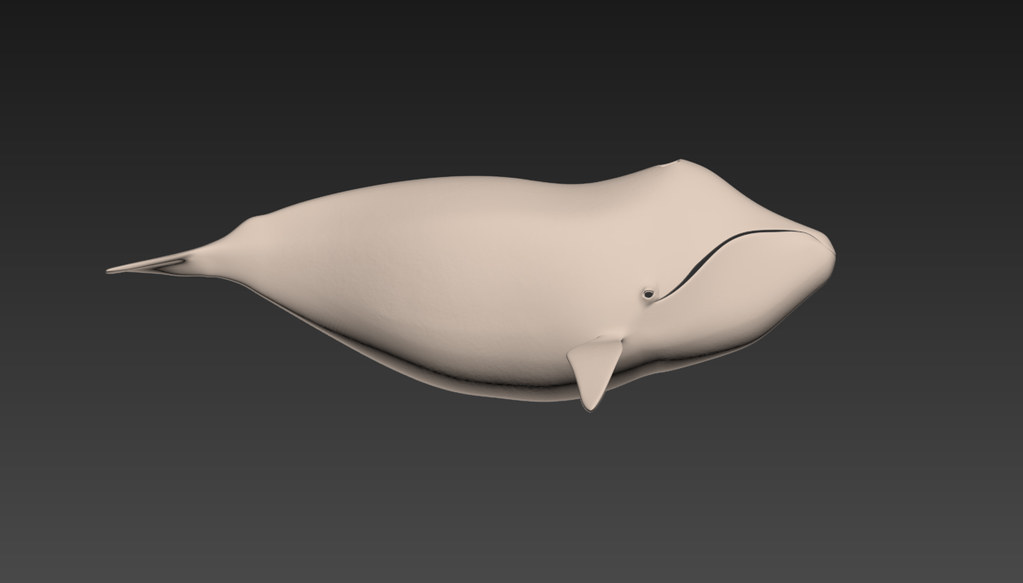 Give us an overview of the design process.

The process starts with the creation of primitive shapes, so I placed high-resolution images into a piece of modelling software called 3DS Max and manipulated them to the required scale and shape.

I then formed the basic shape on top of these images and added more detail. I created each body part separately, from the base of the body to the fins and tail, and then attached them all together.

Even at this early stage, there are so many versions needed to create that perfect Bowhead whale shape and all of its nuances.

After months of shape work, I got to work on the whale’s movement, creating what is known as a rig. It’s essentially a skeleton placed inside the model that tells each body part how to move. It’s quite mathematical and precise, as one misplaced “bone” can affect the movement of the entire whale.

I’ve lost count of the number of times I created what I thought was the perfect whale, only for it to twirl around in circles instead of swimming in a straight line because of a small error. It can be quite entertaining to watch, or it can bring you close to tears!

Rigging is followed by sculpting, which is basically using digital clay to add detailed features on to a model. Like humans, whales change in appearance with age, wear and tear and I pinned my whale at around 50 years old, so he would be fairly battered and bruised.

Whales often use their heads breaking through ice and may experience attacks, so I added in scratches, bite marks, lumps and bumps. He’s been through a lot!

Knowing the age of the whale helped when it came to the painstaking process of painting. It’s difficult to move away from the cartoon style of games design and into the realistic portrayal of a whale, but I created layer upon layer of colour and texture in Photoshop until I was happy with it.

From there it was all about animation, which I achieved by combining key-frame animation with tweening, which is a process where content is automatically created between two frames so that the animation moves smoothly from one frame to the next.

A lot of the highly detailed production work is lost in the actual video – it’s impossible to comprehend how much work goes in to something like this.

Is there a story behind Bowhead?

There’s one whale at the focus of the installation, and that is Walter. I spent so much time working on him that he had to have a name – we’ve been through a lot together!

I won’t give the story away, but there are three short videos. In the first, we see Walter in his natural environment, and another two whales are introduced in the second and third clips. You’ll see for yourself how the story develops – where they come from, how they interact – when you visit.

The storyline is pretty realistic, and each video implies a narrative so it’s up to your imagination to figure out the rest.

How difficult was it to work on a client project as a student?

Very difficult, but totally worth it.

I’ve had a completely unique learning experience, working closely with my tutors to get to grips with advanced techniques that could have taken me years to learn had I not taken Bowhead on.

I feel privileged to have experienced working for a client while at university, as nobody can prepare you for the stress of client deadlines and the sheer terror of revealing your initial designs to a client for the first time. Robin at the Maritime Museum seriously knows his stuff, and I wanted to prove to him and myself that I could go beyond the brief with an installation that was realistic and interesting.

In the end, I think even Robin was shocked at the standard of the work and that has given my confidence a huge boost. His vision for the museum has come to life.

Who else was involved in Bowhead?

Bowhead was created in collaboration with the music department at the University of Hull, so I worked with music lecturers Rob Mackay and Helen Mitchell, who provided guidance to their students when creating the Bowhead soundtrack.

The music was composed by George Marshall (PhD, Composition), Sarah Dew (MMus, Composition) and Adam Courtney (BA, Creative Music Technology). The stunning soundtrack they have created adds the perfect finishing touch to the piece and guides the narration, so I’m confident that people will love it.

I couldn’t have completed the project without the support, time and patience of HSAD Games Design lecturers, Paul Starkey and Gareth Sleightholme, who have helped me through some difficult processes.

What’s next for you in your career?

Right now, the big priority is my final major project, which is a horror game set in a decaying Georgian house. My degree show is looming and I’ll be showcasing all of my work from the past year, including Bowhead. Thinking ahead, I’m keen to collaborate on more projects, whether that is in games design or architectural visualization, as I love creating worlds and spaces.

This industry is so exciting. Everything is constantly evolving and every day is different. I attend gaming events and meet professionals who have been working in the industry for years, who give you such a buzz because they are still excited by what they do. I feel lucky because I know I’m going to love my job, and there’s not a lot of people who can say that.

Visit Bowhead at the Maritime Museum until Sunday 19 March.