British Road Signs has been encouraging visitors to stop, look and consider the design of this iconic staple of the roads. Playful takes on the signs by prominent artists and designers in a gallery setting have helped transform them, inspiring a new appreciation in the design of the humble road sign.

Here Patrick Murphy, Director and Curator of MADE NORTH reveals a little-known story behind the signs, plus his thoughts on design and culture in the region.

Q. What made you want to pay homage to the road sign?

As a designer and an artist I’ve always been inspired by them as they’re great examples of understated everyday design. Whether we’re driving or walking – they’re everywhere in the towns and cities that we occupy so I’ve always been interested in their role.

When it was the 50th anniversary of the British road sign in 2015 it seemed quite fitting to create a project that celebrated them. I know that other designers and artists love them as well, so it made sense to throw it out to the community for everyone to respond to.

They did something that’s quite unique – Margaret’s designs are actually quite human, personal. Even though we’re very used to seeing them every day, if you actually go up and look at them afresh you’ll notice that they’re well proportioned, well drawn. Margaret did most of the pictograms – for example the children crossing the road and the roadworks.

Jock Kinneir oversaw the whole project – he did the more typographic side of the design, for example the arrows that everybody sees. The human aspect of the signs, the fact that they’re not mechanically drawn and you can see Margaret’s hand at work in them makes them iconic.

Meeting and working with Margaret, you could see how this had evolved from her own personality as a typographer as well. She helped design the transport and motorway typefaces. It’s the humanity in it.

Q. What did you learn about the personal history of the road sign through working with Margaret?

The human element that she uses. For example, the children crossing the road: the girl leading the boy by the hand is a self-portrait by Margaret. That’s her as a young girl – it’s an example of a story you don’t really realise when you’re looking at the signs. She swapped those roles because the previous sign in the 30s had a boy leading the girl by the hand. With it being the 60s she brought in a bit of girl power. She swapped these roles around and designed the girl around her own self-portrait.

Before computers everything was hand drawn – and although she uses a computer now Margaret still prefers hand-drawn designs and typography that’s been created over the years. Visiting her and meeting her, and seeing her studios, it’s clear that there’s a lot of well-crafted work there.

Q. What are the pieces in the show that stand out for you?

There are so many – it’s hard to pick! There are some that stand out – Aubrey Powell’s reworking of Pink Floyd’s Dark Side of the Moon album, which fits perfectly with the triangle. There’s also FUEL’s reworking of the swastika and Sir Peter Blake’s four pop-art signs which really work well as a series. I just like the fact that people have been able to put their own personalities to it.

Sir Terence Conran did a graphic sign showing somebody splattered on the road – which is perhaps more violent to get a point across, but people should make their own choice! 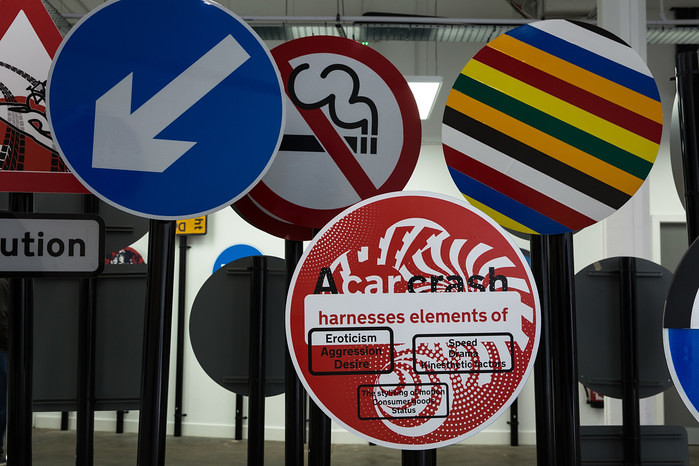 Q. What are the aims or goals of your organisation MADE NORTH?

MADE NORTH has always tried to promote northern design. I don’t know whether the northern powerhouse as a thing is definable or not. It’s more of an abstract idea. As long as we can champion and showcase northern designers and work with them we’re achieving our aims.

We’re trying to do more publications with designers in the next few years. It’s important that we keep discussing and promoting the North in an interesting way, and avoid the clichés that can be used.

Q. What are your views on Hull 2017 so far? Have you managed to visit?

Yeah, I’ve visited a number of times. I think it’s fantastic. I think the North really needs events like this to promote its output, and also bring national and international artists into the city from abroad. It’s fantastic.

You’ve got the Turner Prize this year, which is great because it brings people outside of Hull into the city, but also gives people based in Hull access to great events and great exhibitions throughout the year.