If you’ve been browsing the BBC website this weekend, you may have noticed an unusual hybrid of speed skating, rugby and roller disco being streamed from a sports hall in Manchester. That will have been the third Roller Derby World Cup Final, in which USA beat Australia, watched by people across the globe. It’s also a scene that has been bubbling away in Hull for almost a decade, thanks to Hull’s Angels Roller Derby, also known as HARD, but what is it?

Roller derby is fast and furious, a full contact sport played on quad roller skates around a flat oval track. At first glance game play is anarchic as players appear to take chunks out of each other on wheels, but the rules are actually quite simple.

Two teams of five skaters take to the track and one player from each team – the jammer – tries to score points by lapping opposing skaters. The remaining four players – the blockers – try to stop the opposing jammer by using their hips, bum and shoulders, while also helping their own jammer through the melee. It’s predominantly played by women and players claim it is the fastest growing women’s sport in the UK. 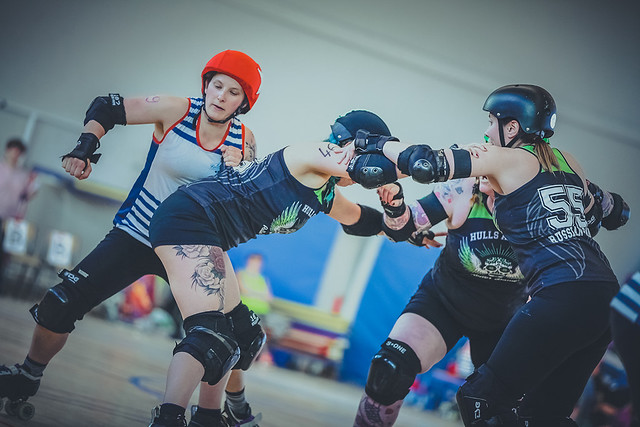 “Roller derby is the only sport I have ever truly enjoyed,” says Frieda, a skater with HARD, Hull’s first roller derby team, founded in 2010.

“A mid-30s woman on roller skates, hitting other people for fun? It is my stress release after challenging days. It is my time away from being a mother and my support network.”

Modern roller derby is fairly new in the UK, but its history goes back to the 1930s, when mixed-gender couples would skate in endurance races on banked tracks in cities across the United States. The sport evolved throughout the 20th century to include contact before dying out in the 1980s. It was then revived in 2003 as an amateur sport in Austin, Texas by the Texas Rollergirls. Crucially, they transferred it to a flat track that could fit in a sports hall, making it much more accessible and roller derby has since spread across the world.

Where does the sport sit in conversations about culture, though?

The early days of the modern game were heavy on theatre: players wore homemade outfits and skated under puntastic nicknames, while music accompanied the action on track. This riot grrl feel was a hallmark of the game, but it was also more than an aesthetic.

“From the beginning roller derby was a full contact sport, played exclusively by women, who could move away from ideas of femininity that were imposed on us and grow,” says Connie ‘Wheelie’ Binns, another skater with HARD.

Players’ nicknames still exist and are more than just a fancy flourish, instead helping people to reveal their true identity, as HARD’s own ‘Wheelie Binns’ explains.

“Research into roller derby has suggested alter egos and names allow skaters to be themselves and be aggressive without repercussions,” says Connie. “It’s also a fun way that skaters can take on a new role.”

“It’s like our own superhero name,” adds Frieda, aka ‘F Bomb’. “And our super powers are our butts for blocking, or our sweet footwork for jamming.”

In that sense roller derby is as much a counter-cultural phenomenon as a minority sport. Roller derby may be less theatrical today but the feminist streak that drove its rebirth is as strong as ever, especially when it comes to body positivity and sexuality.

There is no body shaming in this sport; instead it’s a community which empowers you to love yourself because your body is your weapon.

She continues, “One size fits all actually means one size fits all. There is no body shaming in this sport; instead it’s a community which empowers you to love yourself because your body is your weapon.”

Roller derby is also popular amongst LGBT people thanks to its welcoming and supportive sense of community.

That’s especially true for Connie: “I started playing roller derby to meet new people, but I stayed for a space that allowed me to be myself, something I had struggled to do for a while. I’ve known I was gay since I was young and I always felt like I had to be a certain way, but roller derby showed me there was no right or wrong way to be part of the LGBT community.” 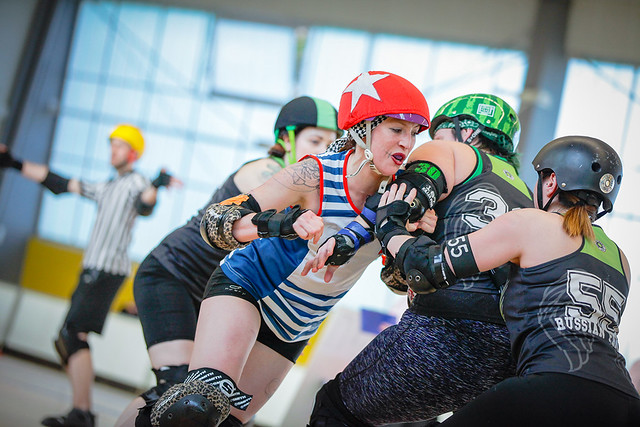 “We get a chance to be ourselves instead and to be out in a community that doesn’t judge,” she says. “Roller derby is a giant family that just wants to make sure everyone in it is safe, loved and supported.”

Don’t let the strong sense of community mislead you, though. On track, players won’t hesitate to heap you on your backside in what is an incredibly athletic sport. It’s also mentally challenging, with players engaging both their attacking and defensive brains simultaneously.

If roller derby sounds like your kind of thing then HARD recruit new skaters throughout the year.

“We hold new intakes every 12 weeks and we coach you from scratch,” says Frieda. “Even if you have no experience of skating it is no problem, we will teach you.”