If you’ve visited Hull during 2017, you might have spotted the striking work of Spray Creative dotted around Hull’s restaurants, bars, shops and even the public realm.

Launched in 2016 by seasoned graffiti artists Ollie Marshall, Kain Marshall and Josh Ashton, it hasn’t taken long for Spray Creative to make its mark on the city, and we were lucky enough to work with the team recently to give Hull 2017 volunteer Paul Benson the experience of a lifetime in his first ever graffiti workshop.

We’re always keen to share the success stories of Hull’s creative start-ups, so we chatted with Ollie of Spray Creative to find out more.

SPRAY CREATIVE WAS LAUNCHED IN 2016. HOW DID YOU GET STARTED?

Honestly, the three of us fell into Spray Creative. We have each been painting individually for around 10 years in Hull, then about six years ago we started painting together every weekend – getting out of town and making trips to meet graffiti artists in different cities.

At the beginning of 2016, we had this idea of linking up and putting ourselves out there to hire. Between us, we have different graffiti styles and skills in sign making, illustration and graphic design, so instead of being ‘Ollie Marshall, the graffiti writer’, why not create a brand identity and do it properly?

WHAT KIND OF WORK DO YOU CREATE AND WHAT PROJECTS ARE YOU MOST PROUD OF?

Because of the different skill sets we each bring to the table, we’re lucky to be able to offer pretty much every style in the work that we do. It can be anything, from large format stencilling to freehand graffiti artwork, murals, perspective pieces, original concepts and digital artwork. I think a lot of people are choosing to work with us because we can merge different styles in one piece.

We do all have our own specialisations. I do a lot of the graffiti lettering and pattern work, Josh is a brilliant illustrator and Kain is amazing at painting freehand faces – he can pretty much paint somebody like-for-like. Kain also has design experience and comes up with a lot of the visuals on Photoshop and Illustrator. 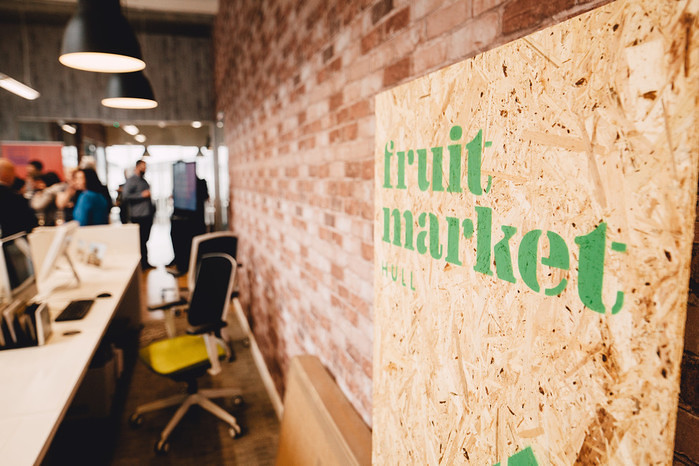 Our work on the guerrilla advertising for the Fruit Market is probably how we are most well-known. We knew about the plans for the area quite early on which allowed us to create something that gave it an identity. We also painted the Venn diagrams on Drypool Bridge and have done a fair few workshops with local community groups and businesses.

YOU RECENTLY SPENT TIME IN SIERRA LEONE WITH FREEDOM FESTIVAL. TELL US MORE!

We were approached by the Freedom Festival team about going over to Freetown in Sierra Leone to teach the locals how to produce large artwork and murals using aerosols. I think Freedom Festival had seen what we had done with some of the empty space in Hull, and thought we could help people in Freetown to approach their empty spaces in new ways.

We were dropped at a British Council building in Freetown and spent time with a group of local artists, delivering multiple workshops. It was the first time this kind of aerosol had been used in Freetown, so it was an eye opener for the guys there, who usually work with oil-based paint. They couldn’t work out how a huge mural could be created in such a small space of time.

Through these basic workshops, we were enabling artists in Freetown to experiment with new techniques. Whether it was an artist who had been working in Sierra Leone all of their life or a younger person just starting out, it was amazing to see everybody taking our advice on board and enjoying themselves. 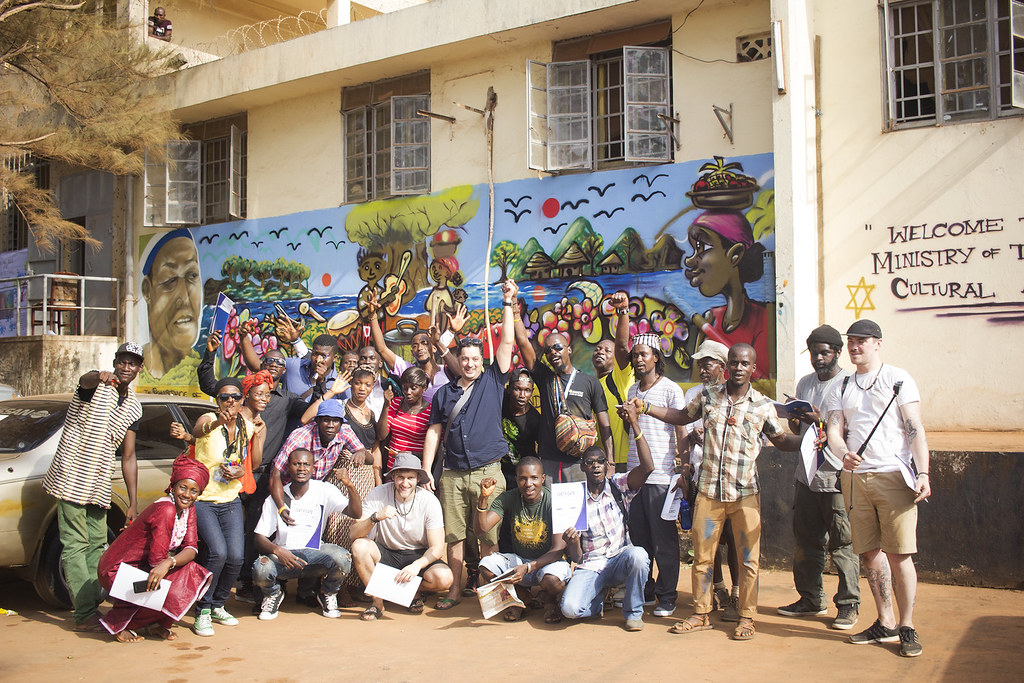 A few of the artists came over to Freedom Festival this year to help paint a mural, what is really cool is that they have just hosted their own festival called the King Dus Art Festival and from what we have seen, the artists are still using the techniques that we taught them.

MANY PEOPLE AREN’T AWARE, BUT HULL HAS A BIG GRAFFITI ART SCENE. WHY DO YOU THINK THAT IS?

Hull’s graffiti scene was probably one of the earlier scenes to be respected by artists in the UK and some of the most legendary graffiti artists are from Hull. I’m not even going to try to name them all, but people like Vrok, Pinky, Paris, Xenz, Ziml…

I think Hull is just a place that makes creatives – it’s at the end of the line, there’s nobody to influence us too much. And we have had a lot of derelict, open space, especially around Bankside, which became quite a famous graffiti area in the 80s and 90s. 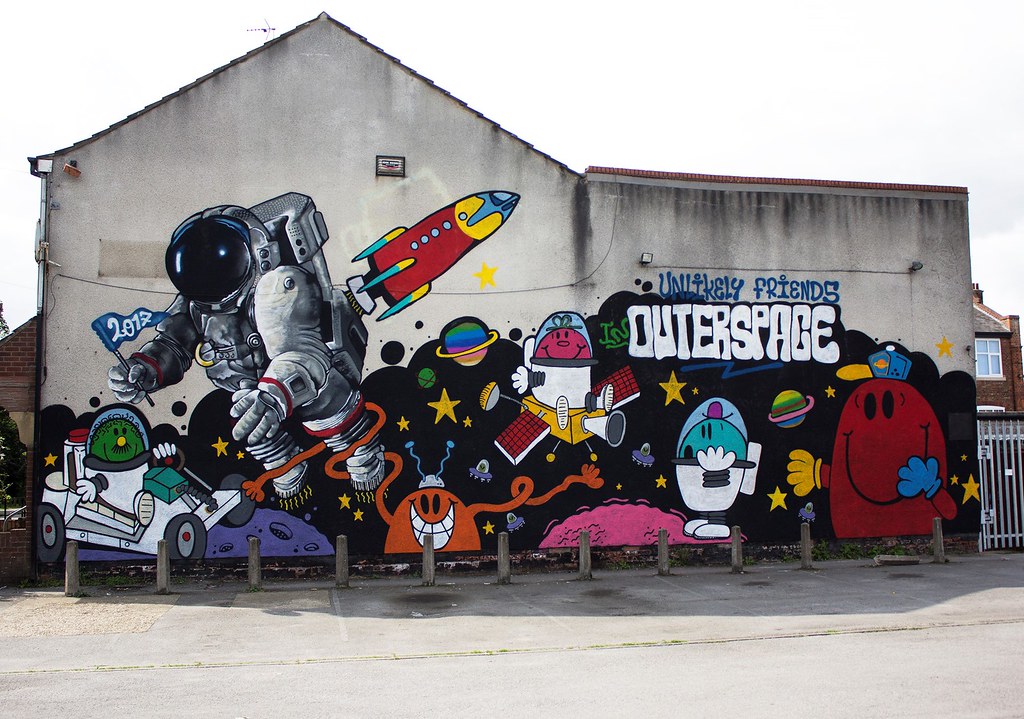 The scene was so big at the time that people were travelling from all over the UK and even places like Amsterdam to paint here. From what I have heard it was a perfect storm.

These Hull artists have huge reputations within the graffiti world, but nobody else really knows about it. There’s even a style of graffiti that the older guys will tell you was bred in Hull. A lot of them have moved out of the city now so it’s great for us to give back to the scene that inspired us to do what we do.

WHY DO YOU THINK GRAFFITI ART IS IMPORTANT?

Anybody can give graffiti art a go which is what makes it so great. There are no rules, no expectations, no judgements – it’s completely personal to you. You can paint anything and there are so many styles to try out and different spaces to paint.

For me, graffiti art is something to enjoy and to help you switch off. And at the end you have something to be proud of. I couldn’t recommend it enough. FINALLY, WHERE MIGHT PEOPLE SEE SPRAY CREATIVE’S WORK IN THE FUTURE?

Firstly, we’d like to say a massive thank you to all the businesses and organisations who have supported us since 2016. As for the future, we don’t want to give too much away, but you’ll be seeing us all around the city over the next few months and we’ll also be flying the flag for Hull outside of the city. Keep your eyes peeled!