From Saturday 22 April, visitors to the Ferens Art Gallery can feast their eyes upon a dramatic exhibition of major artworks by Lucian Freud, Ron Mueck, Edouard Manet and Spencer Tunick.

The exhibition, SKIN, will be on show until Sunday 13 August, exploring modern and contemporary responses to the human figure. These works are set to enhance the existing permanent collection held at Ferens, which includes several nude portraits, from Stanley Spencer’s Nude, Portrait of Patricia Preece (1936-37) to John Coplan’s Self Portrait Upside Down (1992).

One highly anticipated body of work is Spencer Tunick’s Sea of Hull, which will be shown for the very first time since its commission on 9 July 2016. You may remember the 3,200 participants from around the world who stripped off and painted their skin blue to take part in the piece, which was photographed in key locations around Hull.

Sea of Hull is officially the UK’s largest nude installation and joins Tunick’s impressive collection of more than 70 large-scale nude photographs shot across the world since 1994. This new series of photographs features the stunning backdrops of Queens Gardens and the Scale Lane swing bridge, telling the story of Hull’s maritime history.

Three pieces will initially join the permanent collection of works at the Ferens, with the possibility of a fourth piece joining the collection subject to the success of a crowdfunding campaign by Friends of the Ferens. A series of potential photographs will be on show in Gallery 8 of the Ferens and the public will be invited to vote for their favourite. 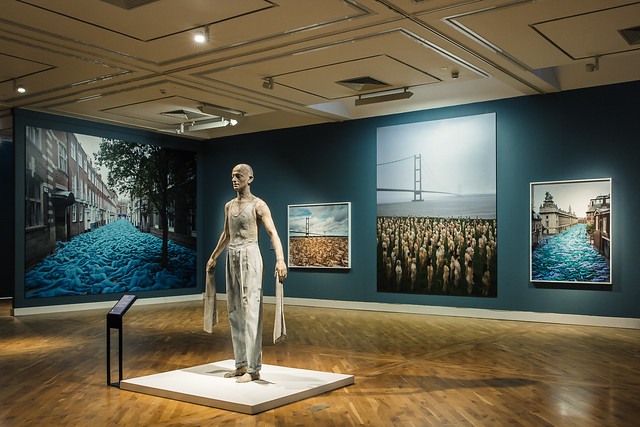 Joining Sea of Hull in the exhibition is work from one of the UK’s leading sculptors, Ron Mueck. Presented in partnership with the ARTIST ROOMS collection owned by Tate and the National Galleries of Scotland, the work features striking sculptures with unbelievably realistic qualities.

Several of Mueck’s works will be on display in Hull, including a new piece, Poke (2017), alongside Wild Man (2005), Spooning Couple (2005) and Ghost (1998). Highlighting the vulnerability of modern life, each sculpture uses careful composition and extreme technical precision to great effect.

Fans of realist painter Lucian Freud will have access to four of the artist’s intimate paintings, on loan from national partners and exhibited as part of SKIN. Two Men (1987-1988), Naked Girl with Egg (1980-1981), Small Naked Portrait (1973-1974) and Large Interior, London W9 (1973) all explore the relationship between the British painter and his models. With a frank and psychologically complex style, Freud’s works are instantly recognisable.

Rounding off the exhibition is the ground-breaking preparatory study for Le Déjeuner sur l’herbe (1862-63) by Edouard Manet, showcasing a nude woman surrounded by clothed men in a scene that scandalised 19th-century audiences and altered the history of art.

Kirsten Simister, curator of art at Ferens Art Gallery, said: “I am always excited about seeing new works brought together on display. We’re really looking forward to the public reaction, given the amazing response we had to the Spencer Tunick installation last year. Hopefully we can recreate something of the same sense of excitement.

“The team has worked incredibly hard to deliver this exhibition, and it is fantastic to have seen the idea through from Hull’s bid for City of Culture made four years ago.  Now, the ambition has become a reality, and we hope everyone who visits SKIN will enjoy it.”

Councillor Terry Geraghty, portfolio holder for culture and leisure and chair of Hull Culture & Leisure, said: “This bold and ambitious exhibition is one of the gallery’s major highlights for 2017, in addition to the esteemed Turner Prize later this year. The scale and quality of the work on display as part of SKIN reinforces the gallery’s ambition to present new, contemporary work alongside its stunning permanent collection aiming to attract new audiences to the gallery.”