In 1825, a gigantic 58.5ft sperm whale was found washed up on the shore near Tunstall, East Yorkshire. The discovery stirred a great deal of public interest and news soon captured the attention of James Alderson (1794-1882), a pioneering Hull surgeon.

Alderson travelled to the site of discovery to carry out a detailed dissection of the creature. The procedure was later referenced in an influential work, The Natural History of the Sperm Whale (1839) by Thomas Beale (1807-49), who was also present at the autopsy.

The whale’s remains were legally claimed by Sir Thomas Aston Clifford Constable, who had the right to maintain anything washed up on the Holderness shore. He made sure that the carcass was transported to the Burton Constable estate. 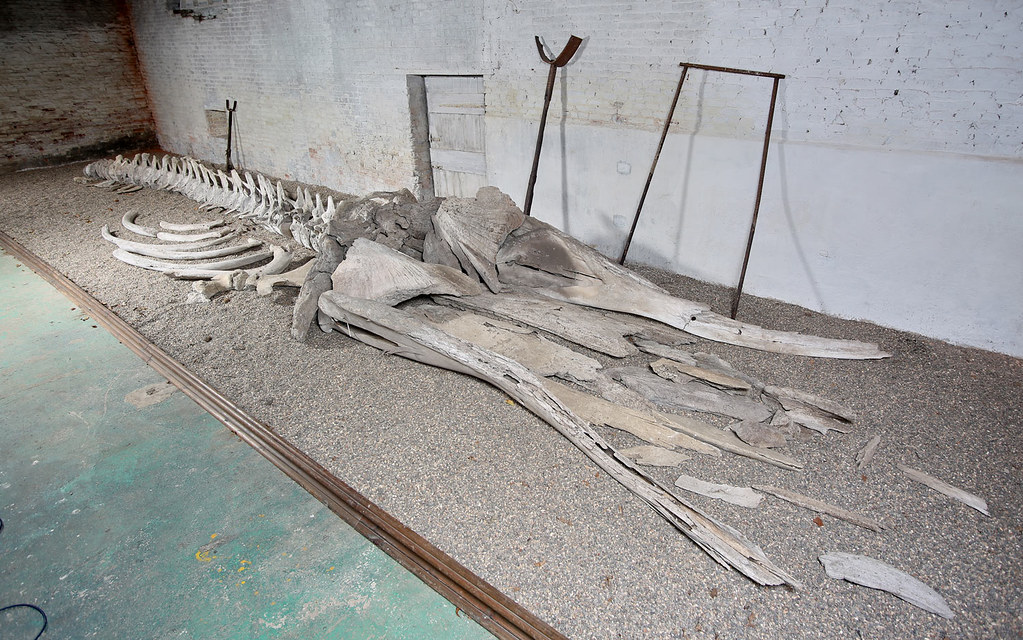 The skeleton of the whale became a well-known item in Sir Clifford’s collection, and was mounted on a wrought iron frame in the parkland from 1836. Here, the skeleton captured the imagination of American novelist, Herman Melville, who visited Burton Constable Hall while carrying out research for his renowned Moby Dick (1851).

Sir Clifford thinks of charging two pence for a peep at the whispering gallery in the spinal column.
– Moby Dick, Herman Melville

Melville published a direct reference to the Burton Constable Whale in his seafaring classic:

“…at a place in Yorkshire, England, Burton Constable by name, a certain Sir Clifford Constable has in his possession the skeleton of a Sperm Whale…Sir Clifford’s whale has been articulated throughout; so that like a great chest of drawers, you can open and shut him, in all his long cavities – spread out his ribs like a gigantic fan – and swing all day upon his lower jaw. Locks are to be put upon some of his trap doors and shutters; and a footman will show round future visitors with a bunch of keys at his side. Sir Clifford thinks of charging two pence for a peep at the whispering gallery in the spinal column; threepence to hear the echo in the hollow of his cerebellum; and sixpence for the unrivalled view from his forehead.”

The remains of the whale skeleton were recovered from the parkland in 1995 and are now on display in the Great Barn of the Stable Block at Burton Constable Hall.

The whale is nicknamed Constable Moby and continues to intrigue audiences today.