Joseph Mallord William Turner (1775–1851) is widely known for producing dreamy landscape oil and watercolour paintings. He is regarded as an innovative figure who established new approaches towards painting in his day.

Turner aspired to be an artist from a young age. Following this ambition, he enlisted himself as a student at the Royal Academy of Art, London, when he was only 14 years old. His first oil painting was exhibited at the academy’s annual exhibition when he was 21 and he became a Royal Academician aged 27, which meant he was responsible for the governance of the establishment alongside other elected members.

A leading figure of the British Romanticism movement (1780-1830), Turner strove to capture the beauty of the natural landscape in his work and went to extremes to depict his subject matter. For example, unlike his fellow artists and peers who painted in their studios, Turner took his sketchbooks, canvases and paints out with him to draw and paint in the open air. Across the United Kingdom and Europe, he braved all weathers and seasons to paint from sunrise to sunset, through mist, rain and snow. There is even a rumour that Turner once tied himself to the mast of a steamship during a turbulent snow storm to experience the raging waves crashing around him! 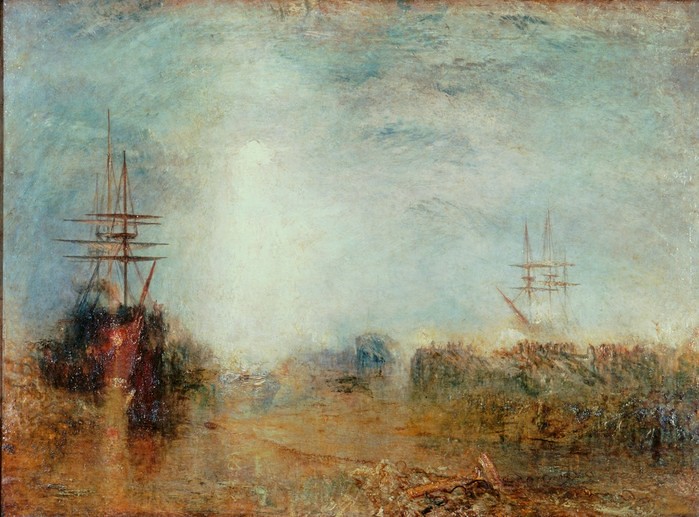 In addition to landscapes, Turner painted scenes of key moments in history and other compelling stories. Although many of his paintings are brimming with light and look like something contrived from his imagination such as Norham Castle, Sunrise (1845), he also created dark atmospheric paintings; Snow Storm – Steam-Boat off a Harbour’s Mouth (1842) is a fitting example.

Turner’s use of bright hues of colour combined with his loose, expressive brush strokes challenged traditional styles of painting and established himself as one of the first modern painters. Many of his later artworks can stylistically be compared to the works of impressionist artists Claude Monet, Edgar Degas and Auguste Renoir, who aimed to capture the transient effects of light.

JMW Turner is recognised as one of the greatest British artists of all time and continues to captivate and inspire modern artists today. More than 150 years after his death, we celebrate British contemporary artists with the same ground-breaking ethos through the prestigious Turner Prize.

Three of Turner’s rare whaling scenes and one maritime scene are on display at Hull Maritime Museum from Tate’s national collection, painted at a time when Hull was one of the UK’s largest whaling ports. Turner & The Whale provides a unique insight into Turner, some of Hull’s finest artists and the city’s nationally renowned whaling collection.

The Turner & The Whale exhibition opens on Saturday 7 October and runs until Sunday 7 January 2018.