Stan Cullimore’s Hull: What a good place to be! – Visit Hull
Skip to content

So here we are, people, approaching the final season of the city of culture year. Tell The World. Seems now would be a good time to take stock of where we are and how things stand. A good time to look around and try to work out what’s changed, what’s stayed the same – and maybe even take a guess as to what the long-term legacy of all this mayhem and madness might be.

After all, when the dust has settled, life in Hull will still be going on. But will it be the same as before? Or will everything have changed? In order to try and answer these (and other) questions I recently took a trip up to the Paris of the North, our very own city of culture. What I found was encouraging. Very encouraging. 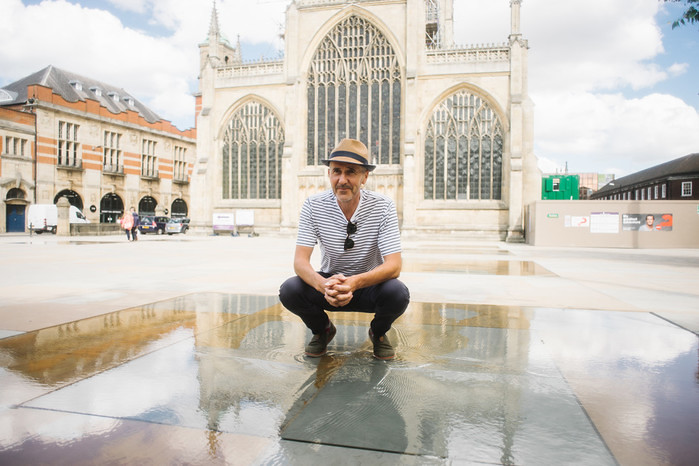 The adventure began as I drove Hull-bound along the M62 toward the hero of our story. The landscape opened up before me, the sky grew bigger with every mile and realisation dawned that a journey this epic needed a soundtrack to match. So I put on BBC Radio 3. Can’t go wrong with the classics. After listening to a suitably uplifting slice of paradise, the presenter announced that they were broadcasting from Hull and would be doing so all weekend. Wowser! That’s something I’ve never heard said before. Ever.

If it’s culture you’re looking for over the next few months, then the golden city at the end of the M62 must be at the front of the queue on everyone’s bucket list

Moments after this shot across the airwaves, I decided to switch channels, to catch a favourite show of mine on Radio 4. So I did. Just in time to hear a recorded conversation between two young lads, who were getting excited about creative writing in their classroom. So far, so what, I hear you thinking. Well, dear reader, these boys just happened to be talking about their time at Longhill Primary, a delightful school in east Hull which is kind enough, thanks to Mr Batty the marvellous headteacher, to invite me to visit them once a term. To talk about creative writing. Double wowser! With a side order of “howzat?” thrown in for good measure.

But I didn’t need a crystal ball to tell me that right now, Hull is all over everything, everywhere. If it’s culture you’re looking for over the next few months, then the golden city at the end of the M62 must be at the front of the queue on everyone’s bucket list. Tick it off or be square, that’s what I was thinking by this stage of the trip.

This onboard radio-based excitement was all very well, but didn’t tell me much about the future. That information came along and tickled my happy place when I arrived at my temporary home for the next few days, a leafy crib hunkered down in the Avenues, a suburban oasis of calm and beauty in west Hull. 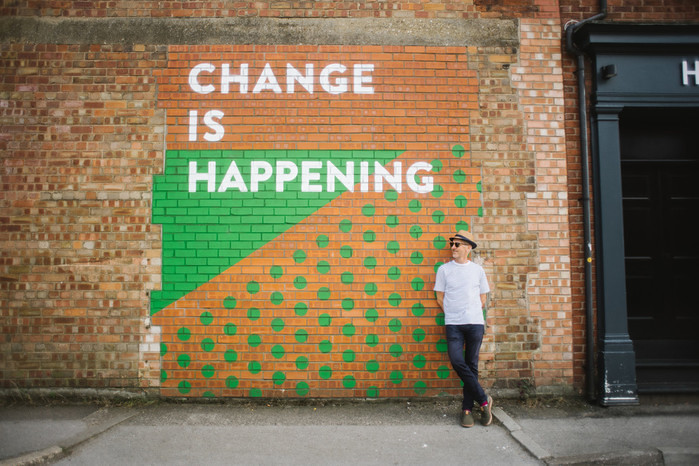 Next day, I headed into Hull city centre to meet up with the Hull 2017 photographer who was going to take me on a guided tour. As we strolled around admiring the views, we got to chatting. Soon dawned on me that things have changed forever in this old town. Time was, when I lived up north, that living in the middle of Hull was something to be avoided. The only things that lived on those central streets were late-night vans selling dodgy kebabs and cheesy chips. Not any more. These days, there are blocks of hipster homes and bijou apartments being thrown up all over the city centre. Turns out that the photographer has even snapped one up for himself. Now that’s gentrification right there. Long-term legacy stuff of the first water. Years after the last culture vulture has rolled out of town, young Hullites will be living in the city centre, filling the place with their clean energy, good vibes and happiness.

First stop was Whitefriargate. The shopping lane where The Housemartins started our busking journey to the top of the hit parade.

With these joyful thoughts lifting my soul, I went on a trip down memory lane. First stop was Whitefriargate. The shopping lane where The Housemartins started our busking journey to the top of the hit parade.

Paul Heaton and I used to play there, getting such large crowds of shoppers around us that the local police used to ask us to stop every now and then to let other people get past. Happy days!

The place still looked the same, only with much nicer paving slabs than I remembered, thanks to a citywide upgrade completed just in time for 2017. After that we nipped over to the biggest church in town, the newly renamed Hull Minster. Some bright spark has inset some rather splendid reflecting pools in the square out front of the minster.  Very peaceful, very picturesque, very nice.

From there it was just a hop, skip and a stroll to the waterfront. We made our way past the marina, heaving with assorted pleasure craft, only to find ourselves on Humber Street. 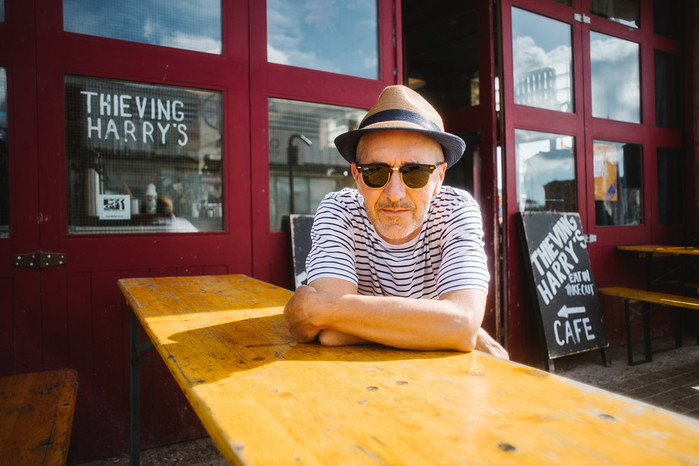 In times gone past, this was a rundown, grotty backstreet. Not any more. These days it is the buzzing heart of old Hull. With more cute and cultural stuff than you can shake a stick at. If you’re looking for art installations, they’re all over the place. Very nice. If you fancy a coffee and cake for afters, there is Thieving Harry’s. If you’re looking for a tasty venue, grab a show at Fruit. If it’s beer, food or gin you’re after, there are enough options to fill the rest of this year. 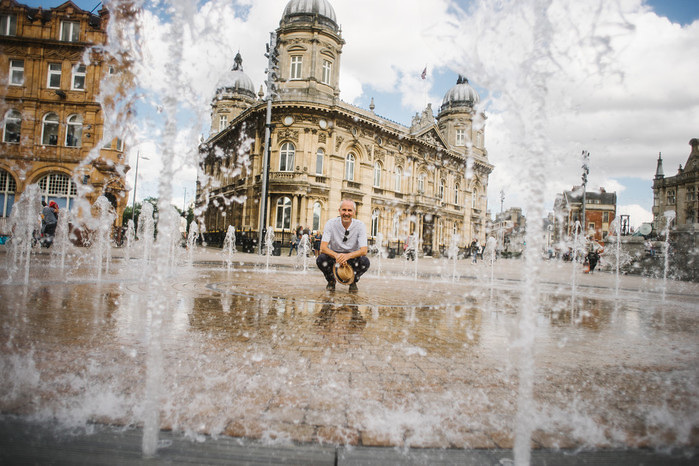 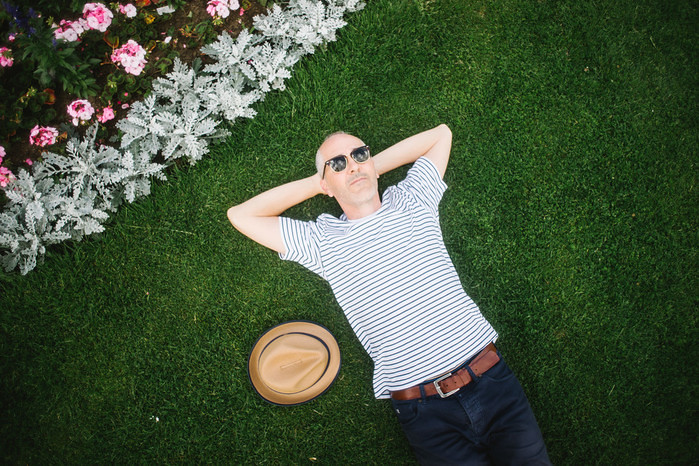 By the time I’d had my fill of all the above, I was hot, sticky and ready for a rest. So we headed over to the new pavement fountains outside City Hall. The perfect place to cool down for small children – of all ages.

No visit to the City of Culture would be complete without dropping by the Adelphi. It’s THE independent music venue of Hull.

After a brief snooze on the grass in Queen’s Gardens we got on our bikes and left town behind, heading for the ‘burbs. No visit to the City of Culture would be complete without dropping by the Adelphi. It’s THE independent music venue of Hull. One of the cultural crown jewels of the place. It’s also where we signed The Housemartins record contract live on stage. Good times. So I cycled past and gave them my regards.

By now, it was time for dinner, so I popped into the Kurdistan restaurant on Spring Bank for a slap-up dinner that was cheap as chips, tasty as toast and far too big to finish.

When the time came to wave goodbye to Hull I realised that although lots of things have changed – and all of them for the better, there’s one thing that has remained the same ever since I set foot in the place all those years ago. Can’t see it changing any time soon either. It’s the people… you can’t move without having a pleasant conversation with a complete stranger.

Long live Hull – UK City of Culture 2017 – and all the friendly souls who sail in her. 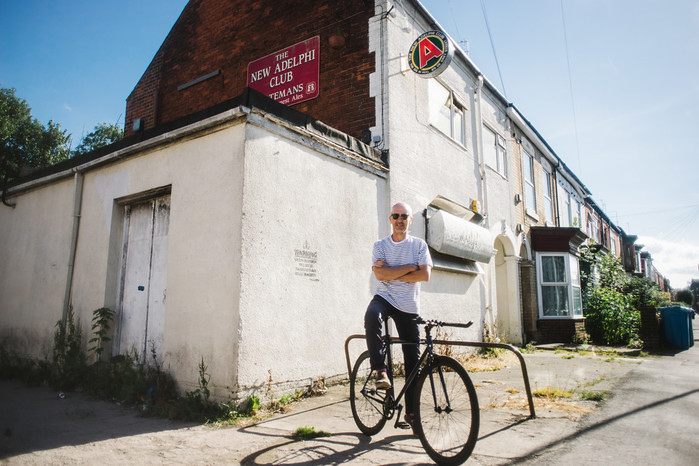