Riotous dancing, endless smiling and a roster of Hull talent. Held monthly at the legendary Adelphi Club, The Residents Association has bloomed into one of the city’s flagship dance music events.

What started as a small group of friends coming together for a one-off event in the name of charity, has gone from strength to strength. Now, the collective hosts monthly jam-packed parties and curates its own stage at some of Hull’s biggest calendar events, Humber Street Sesh and Freedom Festival.

Someone described it as the best house party you’ve ever been to.

We sat down with The Residents Association co-founder Scott Langthorp, AKA Hull music producer Endoflevelbaddie, to find out more.

What is The Residents Association all about?

Different DJs perform 20-minute sets, varying between house, hip hop, drum ’n’ bass and plenty more to create an eclectic night with a diverse mix of music for everyone.

We started almost six years ago. Someone described it as “the best house party you’ve ever been to”, and that’s how we look at it. The mix of music and the friendly vibe in there – a lot of people have come together and become good friends through it.

What was the inspiration behind it?

DJ Cosmo, one of our very good friends, passed away and initially we wanted to raise some money to try and do something to honour him and keep his memory alive as he passed away suddenly, which was horrible. We decided to set up the night as he was a local DJ, many of our friends are also DJs, and it was a quick and easy way to raise some cash.

We intended to only do one or two and we’re still here after six years! All the new DJs who get involved, and everyone who comes along, are humbled to be a part of this.

How many residents did you start with?

There were four of us, and for the first few events it was just our friends who came along and who performed. It was all of us coming together and having a celebration of our friend’s life, energy and all the great things he stood for. Now we have around 70 residents who perform over the course of each year.

The crowds have also changed a lot over time, now I can look around the room and think I don’t know most of these people! We have a different and younger crowd, which we have now connected with and have become a part of it.

You now have your own stage at the Humber Street Sesh and a residency for the Freedom Festival, how did that come about?

We started out at the Humber Street Sesh running the silent disco tent, and eventually we felt it wasn’t getting the best out of our Residents and representing us properly. We felt we needed our own space to show what we are about, and took the decision to have our own tent.

At this year’s Humber Street Sesh (Saturday 5 August) we have 25 DJs playing from noon on the day and for Freedom Festival (1-3 September) we collaborate with Love Our Records and take over Fruit. Both are still the same format as our monthly nights with DJs performing eclectic 20-minute sets.

How can people get involved?

We are open to new DJs and giving anyone a go and we like to promote a community-like, family vibe. 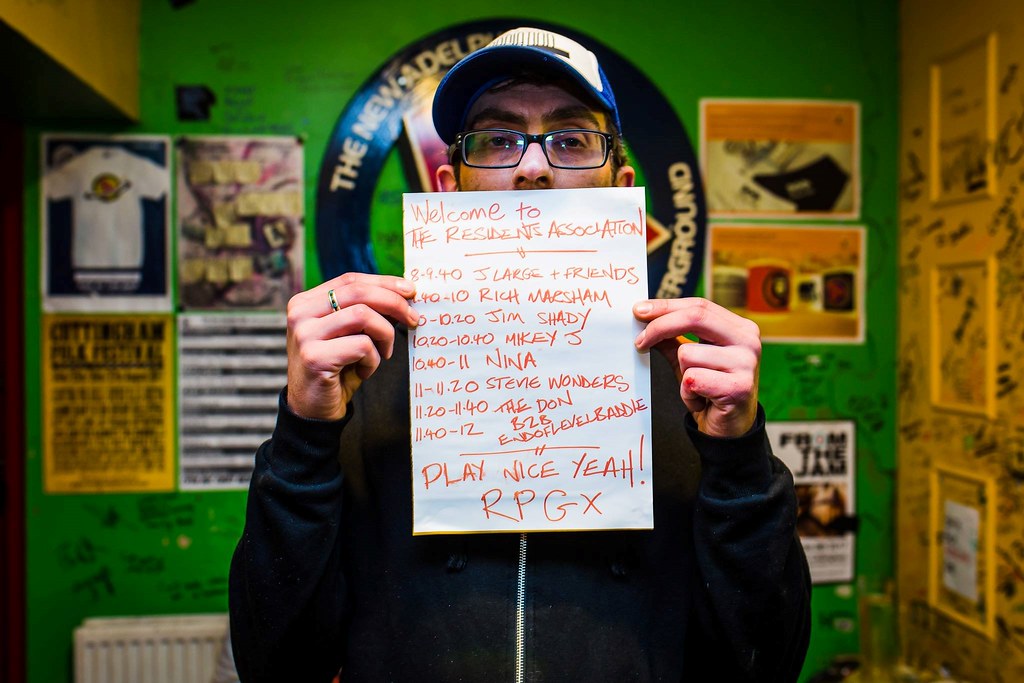 Any future plans for The Residents Association?

There is always a danger that you need to move to another venue or try something a bit bigger. We’re very happy with our position at the Humber Street Sesh and the Freedom Festival. We would love to look at hosting our own festival in the future where we can focus on exploring genres, spreading the talent and giving everyone a little bit longer and a chance to shine.

What’s your Residents highlight from the past six years?

The monthly night itself is testament to its own success. I think it is the best representation of itself in the fact that every night is different from one another, and everyone has a great time.

To be still going after six years and managing to always bring in a crowd is something we’re proud of. We also really appreciate the chance to play in front of people who may not have heard of us before at the local festivals and dance the night away.

Last year, our stage for the Humber Street Sesh was on the Victoria Pier, and when the sun was beaming down into the tent, it was like some sort of glorious Ibiza vibe which is a personal highlight for me.

Follow The Residents Association on Facebook and find out about upcoming events and their sixth birthday bash at the Adelphi Club, Friday 28 July, from 8pm.