Public art is used to inject culture into a city, encouraging people to engage with art who normally wouldn’t. It can be executed in any size and its intention can be to stand out or equally be camouflaged in its surroundings. Hull has never been one to shy away from embracing public art, and during 2017 we’re certainly playing on this.

So far, our Look Up programme has seen Nayan Kulkarni’s Blade, the world’s largest, handmade fibreglass component cast as a single element, land in Queen Victoria Square, Michael Pinsky’s The City Speaks transforms our spoken words into text on the tidal surge barrier and, as of this week, Chris Dobrowolski’s Washed Up Car-go which demonstrates the effects of plastic pollution in the form of hidden beaches and films placed in three cars within the car park of The Deep.

Amid the excitement of Look Up, I decided to share with you a curation of some of my favourite pieces of public art from Hull and across the world.

Illustrating our city’s connections with people across the seas and the positive effect this has had on our population, Gec’s Truelove displays casts of the heads of eskimo (Inuit) couple Memiadluk and Uckaluk. The two were brought to Hull on whaling ship, Truelove, to communicate the Inuits’ plight and often brutal contact with the Europeans. In the spring of 1849, Memiadluk and Uckaluk began their return journey home, when Uckaluk contracted measles and died shortly afterwards. 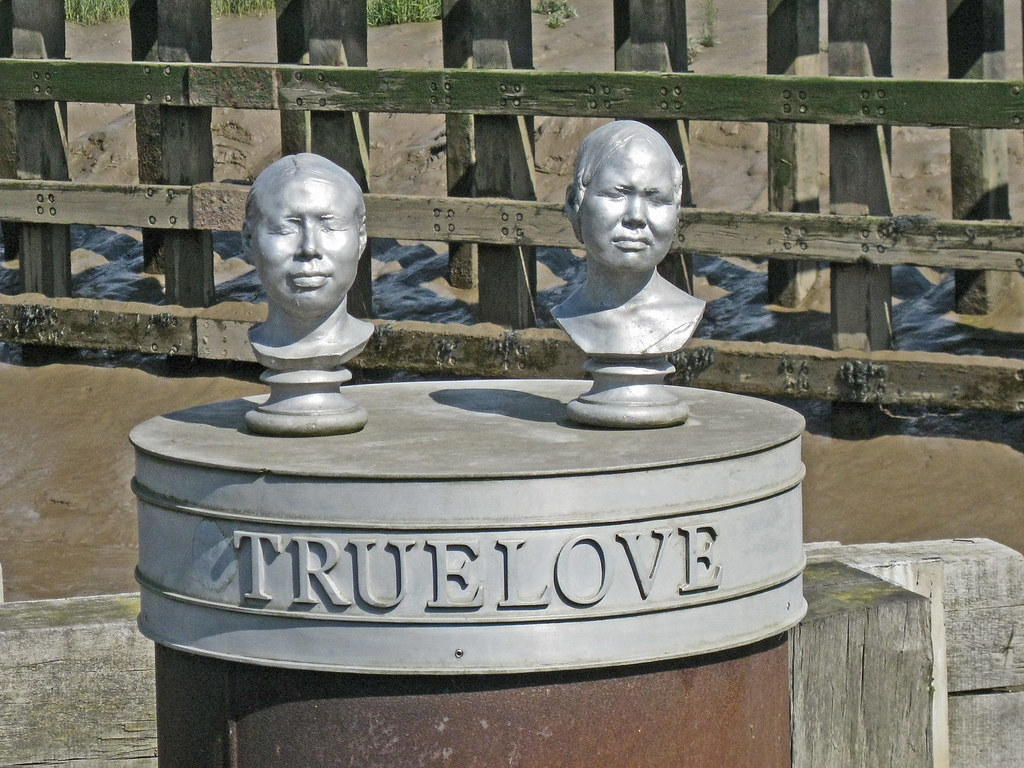 Dennis Oppenheim often keeps the meaning of his art ambiguous. Engagement was installed at Sunset Beach in 2005 when debates over gay marriage were taking place in Canada. The two 30ft engagement rings are described by spectators as portraying that “marriage requires a balance between two people with different interests, tastes and backgrounds”. 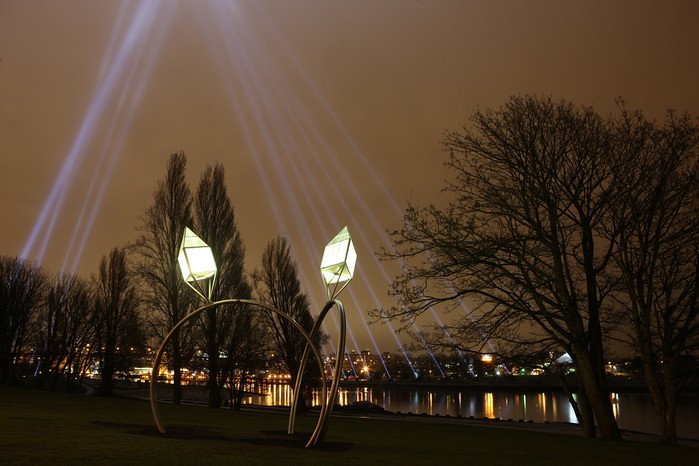 This eye-catching sculpture in Prague’s Old Town depicts psychoanalyst Sigmund Freud contemplating whether to hold on or let go. David Cerny depicts Czech-born Freud in this way to represent his constant struggle with his phobia of his own death.

Often mistaken as a suicide attempt, the sculpture has initiated calls to emergency services. 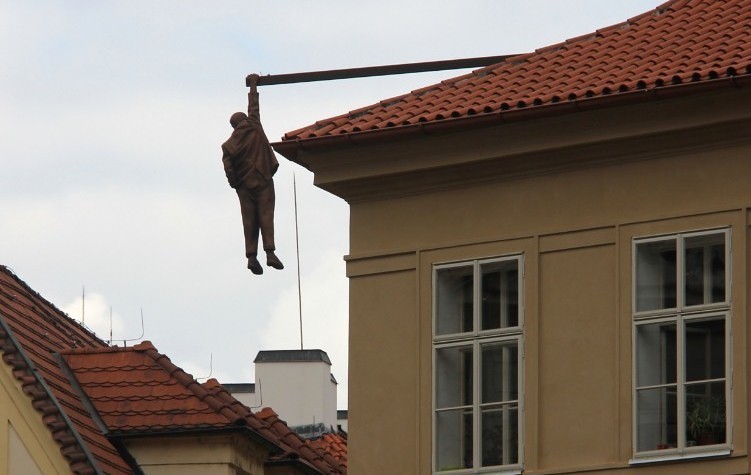 The initial part of artist Pinky’s fruit mural down Martin’s Alley was funded by the Arts Council for Artsesh at Humber Street Sesh in 2013. Complementing this popular piece, he later painted the shutters of two Humber Street stores, one of which now features images of the artwork inside.

During the building of the Weymouth Relief Road in preparation for the 2012 Olympics, Claire Barber gave the people of Littlemoor the opportunity to express their feelings about the build. The project saw 2,400 households in the area receive a bag with tie clips, a pen and three laser-cut neoprene tags to write on their own wishes, desires, protests or hopes, with instructions to tie them onto the metal fencing surrounding the relief road works. Watch out for new work by Barber in our Look Up programme in April. 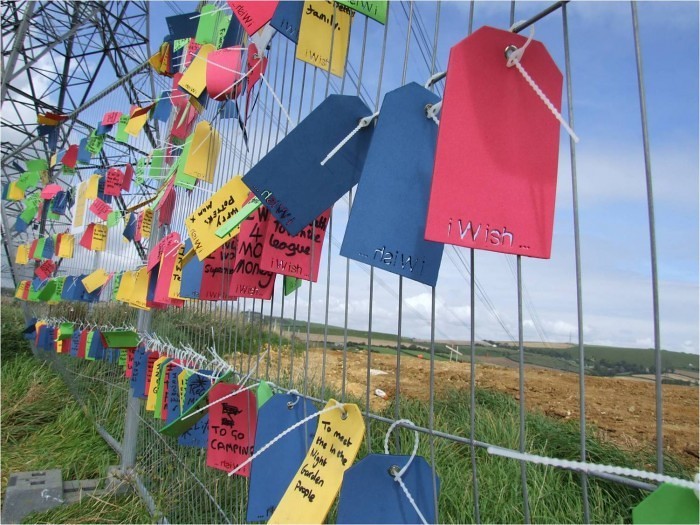 The giant peg pinching a mound of mud and grass was built for the Festival Of The Five Seasons on the outskirts of Liege. Mehmet Ali Uysal’s other works, much like this piece, rely on flawless illusion. 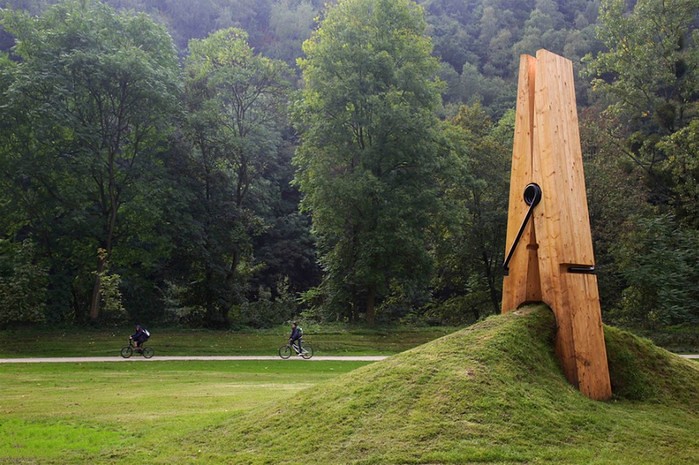 Responding to the life and work of Nelson Mandela, the graffiti art sees the work of 12 artists bringing together their own style and ideas. The striking piece was jointly commissioned by Freedom Festival and Roots and Wings in 2014 to celebrate Mandela’s legacy creating The Long Walk to Freedom from the Wilberforce Institute of Slavery on High Street, to the Fruit Market.

Seven illuminated men, 12 metres high, represent the seven continents in Conversation à Nice. Made of polyester resin and stainless steel, the men (the continents) converse in a dialogue of changing colours with each other and with the spectators. 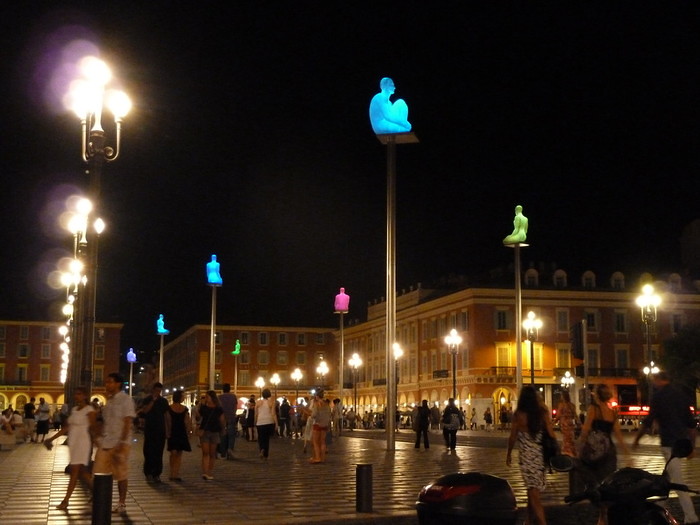 Zenos Frudakis created the Freedom Sculpture with the idea that anyone could recognise the struggle of breaking free and the achievement of freedom, regardless of their background.

The bronze sculpture has many hidden features, such as real money and moulded faces (including the artist’s own). 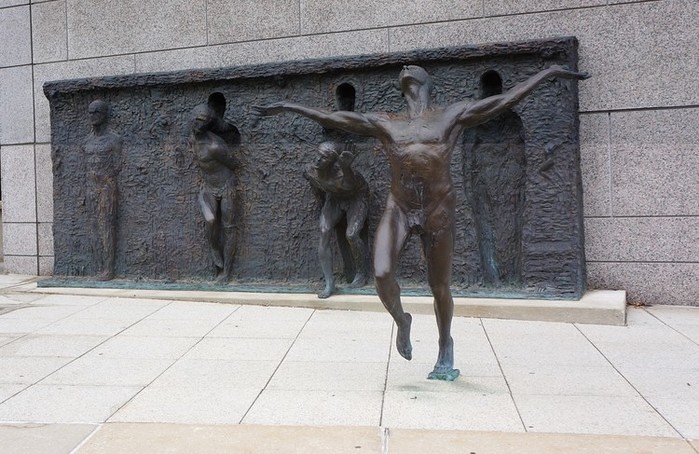 If you randomly stumble across David Mach’s Out Of Order in Kingston-upon-Thames, you might be quite surprised. The work consists of 12 traditional British red telephone boxes, leaning against one another as though toppled like a stack of dominos.

The public art piece was revealed on 19 December 1989 and underwent a much-needed renovation in 2001. 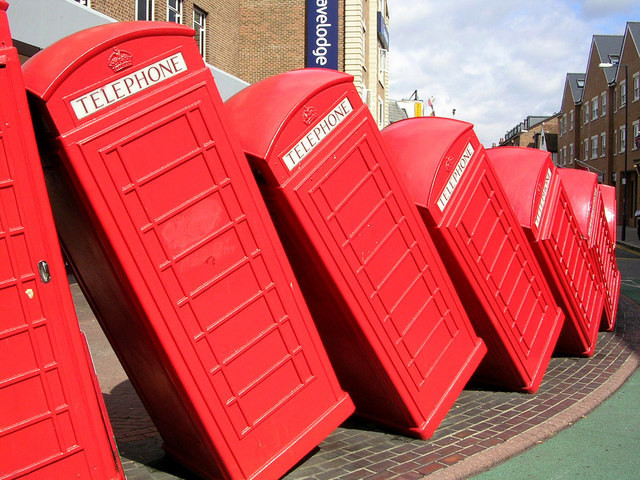 Shooting through Terminal 2 in sculpted aluminium, Slipstream is the longest piece of permanent art – stretching to 80 metres – in Europe. At £2.5 million, it’s also the largest privately funded. It is also one of the most viewed pieces of public art in Britain, seen by  20 million passengers per year, and even played a part in Hull’s bid for UK City of Culture status.

Inspired by the physical aesthetics flight and aircraft, the work was manufactured by specialist fabricators Commercial Systems International in Hull. The sculpture was transported to London in 23 separate chunks, shuttled across the runways by night. 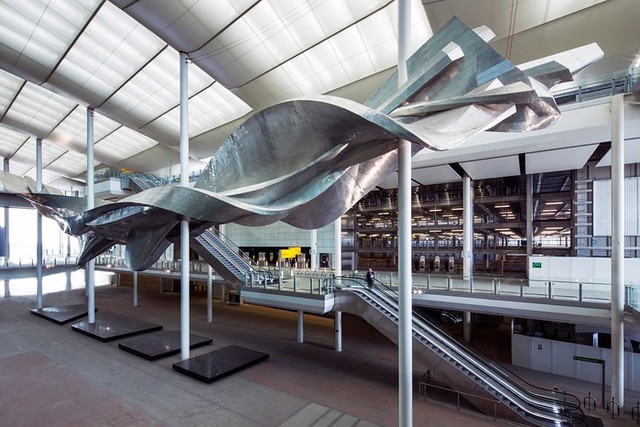 What We Do in Life Echoes in Eternity (Queens NY, America) – Banksy

Unverified graffiti artist Banksy often represents political activism and dark humour in his work. This piece, What We Do in Life Echoes in Eternity, references the 2000 Ridley Scott film Gladiator.

This art is perceived as being humorous and ironic due to the often short-lived life of graffiti art and that Banksy is suggesting that his own work won’t be preserved forever. 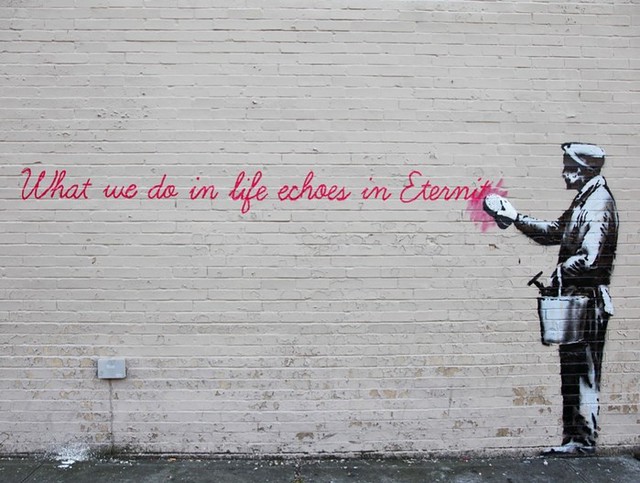