After five years in the making, Hull Truck Theatre presents The Gaul by Hull-born writer Janet Plater and directed by Hull Truck Theatre’s artistic director Mark Babych. No trawler tragedy has caused as much controversy as the loss of the Gaul in 1974. Described as the worst ever single-trawler tragedy it saw the loss of 36 crew members having sailed from Hull. After she twice failed to report in and no distress signal was received, an extensive search operation was launched but no trace of the ship was found.

“The Gaul is the most significant play I have worked on to date. It’s an event that’s still very raw for our community and a tough story to tell, so I know how important it is to get it right” – Mark Babych.

The Gaul is part two of The Hull Trilogy, a trio of plays examining how the city’s past has shaped its identity and capacity for survival and renewal.

Curated from speaking to families, members of the fishing community and members of the Hull Bullnose Heritage Group, this world premiere production explores the journeys of the wives and relatives left behind, through the discovery of the wreck by a TV documentary crew in 1997 and the government inquiry in 2004, right up to the present day.

What inspired you to write The Gaul?

“Like most people from Hull, I’ve always been aware of the Gaul and the ongoing mystery surrounding its loss. I’d thought for years that there were good reasons to revisit the Gaul in a play, made in Hull, to say to the families that they are not forgotten. I was also struggling with personal loss at that time and felt I might be able to say something about that: about how people find a way to keep on keeping on.”

What was your writing process for this play?

“Initially I researched everything I could find: read books, blogs, listened to interviews, read the transcripts of the inquiries and so on.  In the first draft of the script, I tried to include everything. If I had continued to pursue this, the play would have had a cast of hundreds and lasted several days.

Was it difficult to write a play about such a well-known local story?

“It posed particular challenges. Throughout the process I’ve felt a great sense of responsibility towards the families, the community and my hometown.

“I decided the characters would be fictional and not direct representations of specific people, so I’ve used details from what I’ve learnt about people and what they have told me and weaved fictional elements in.

I’m always struck by the resilience of people under difficult circumstances and especially in this Hull community, the sense of humour which will not be quashed.”

Does the play try to solve the mystery of the Gaul?

“The play’s characters have their own theories but this is no new inquiry. Everyone I’ve spoken to seems to have a different theory. When I began writing it, I thought I would examine everything and try to work out for myself what had happened. Although we can’t solve the mystery, I think theatre can be a good place to contemplate it.”

You were born and raised in Hull – what does it mean to have The Gaul premiering here?

“For The Gaul to be produced here in Hull at Hull Truck Theatre, means everything to me as a playwright. Coming home. It’s the best feeling.”

Hull Truck Theatre will also be holding other events for audiences interested in The Gaul including The Gaul Discover Day where artistic director Mark Babych will be offering the chance to see how a production comes to life with an informal workshop with the cast, an exploration of the play, and a ticket to the 2pm matinee performance (Saturday 15 October, 10.30am – 12.30pm). In addition a post–show Q&A will be available for audience members to have the opportunity to ask the cast and creative team about the production (following the 7.30pm performance on Wednesday 26 October). 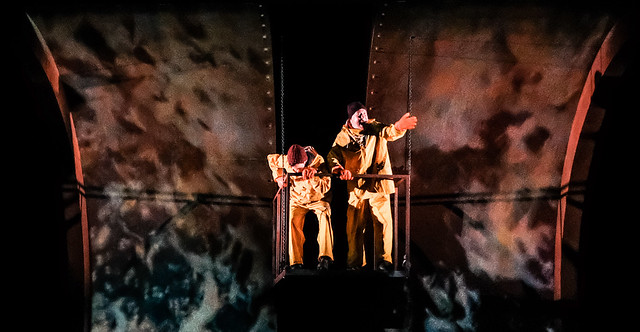