Type Slowly is bringing together Hull’s zine scene and local musical talent and we can confirm it’s a match made in heaven. We met with Mike of Type Slowly (who runs the zines and publication side of things) and Stewart from Warren Records (who handles the music side) to talk all things creativity in the new shop.

How did the partnership between Type Slowly and Warren Records come about?

Stewart: I run Warren Records and Mike runs Type Slowly and we’ve been friends for over 20 years. We work mainly within the DIY creative scene in Hull and we both have a love for underground art. Mike went ahead and opened Type Slowly, which was mainly focussed on publications and zines with a bit of records, and we (The Warren) wanted to mainly sell records. We talked about the potential of doing something together and when the opportunity came up to get a space at The Warren we jumped at the chance. With The Warren being a young people’s charity and not-for-profit, Mike was really into what we were doing. It’s everything that he believes in as well, so it felt like an organic, natural thing to try and do it together. 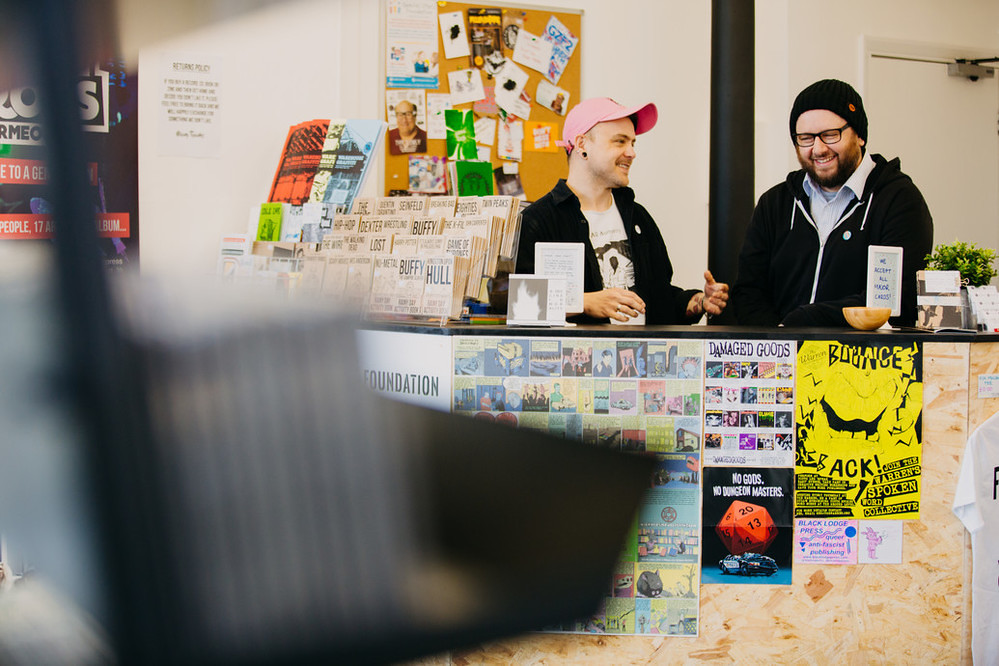 What do you stock in your shop?

Mike: On the Type Slowly side of things it’s primarily zines and most of it is sourced direct from writers. Our stock is mostly American and Canadian. We also stock fanzines – it’s basically anything you can’t get in the mainstream bookshops or on Amazon. We want to just give people something different, a different voice. Our aim is to stock as many local artists and writers as possible too. We want to give artists somewhere they know they can get their creations into the public’s hands. It’s easy for things to get lost online, so I think it’s good to have that physical space where people can actually display their work and hopefully sell lots of it!

Stewart: There haven’t really been that many shops in Hull that offer a space for local music. Mainstream shops don’t always want local music and underground acts. Like Mike said, it’s important to find that space where people can sell their music, and people can find new acts. There are a lot of people that want to support that. For us it’s about getting local music, regional music and underground music from all over the world into a space where people can access it. We want to grow that into an international collection, like how Mike is importing stuff that you can’t get in your typical shops. We want to get bespoke, limited edition releases – that’s the kind of stuff that excites us. 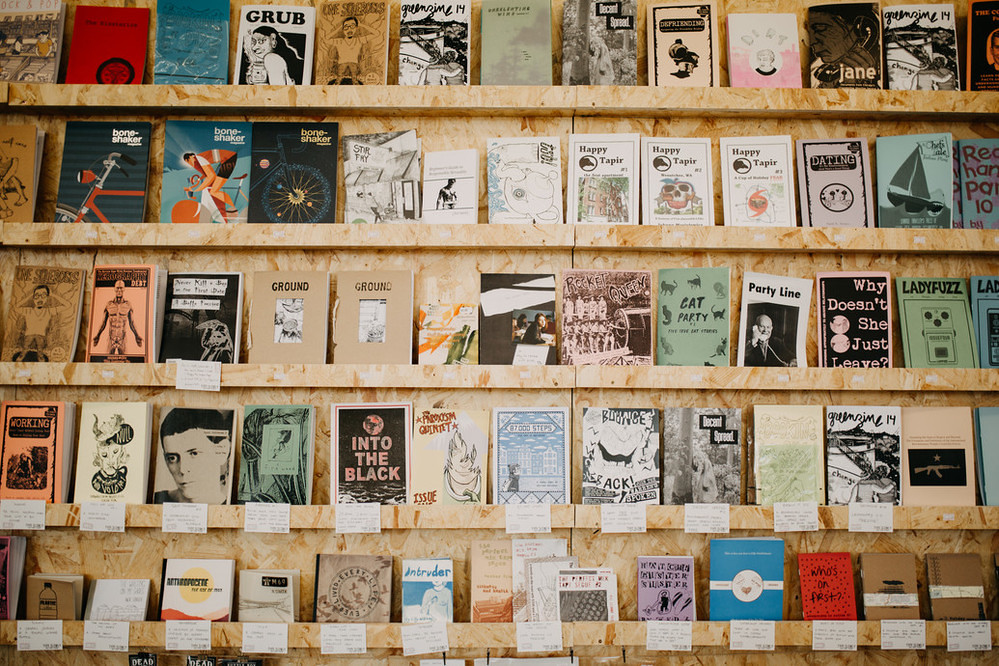 What local artists and musicians do you stock?

Stewart: Warren Records have always been a champion of local music of all ages, of all kinds and we will always champion that. The artists we’re working with currently are a band called Serial Chiller and an artist called Joe Russell-Brown. There are loads of other new artists that are coming through as well.

Mike: In terms of what we stock locally, we’ve got the Warehouse Graffiti zine, which is selling really well at the moment with everything that’s going on down at Bankside Gallery, the new legal space for graffiti. We’ve also got a couple of local graffiti zines – I think now we have six or seven Hull creators. Now I’m chasing people and saying reprint your zine. I want to sell it. 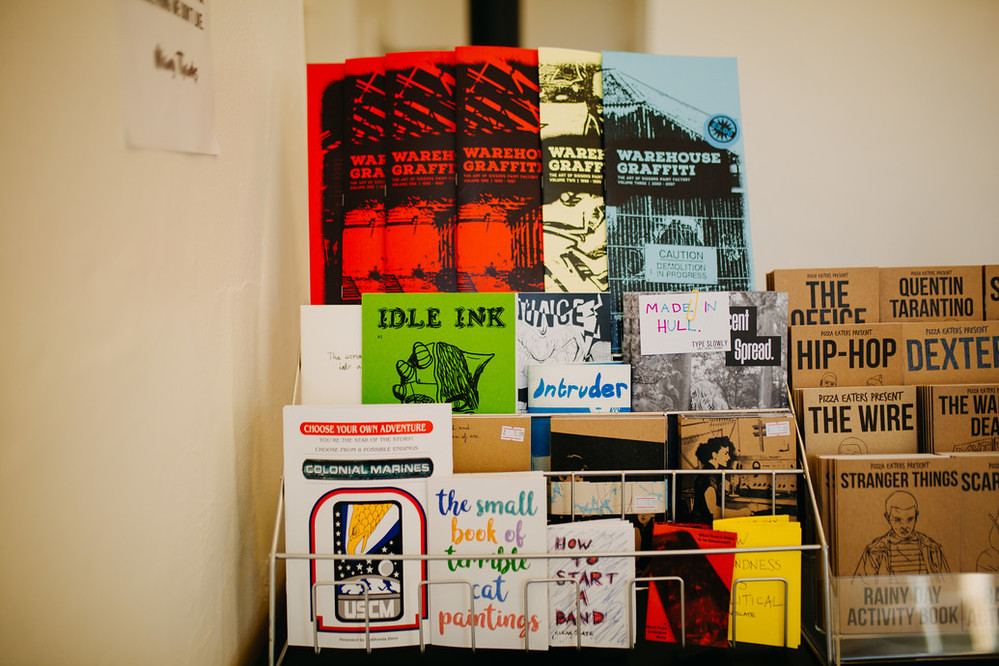 What advice would you give to people wanting to start out in zine making or music?

Stewart: I saw a quote recently which said “a bad idea delivered is better than a good idea not delivered.” For me it’s just a case of doing it. I say to people don’t over think it and don’t worry about making mistakes because that’s how you learn. It takes some of the fun out of it if you start overthinking it. The good thing about what we’re doing with music and zines is offering that mentorship and guidance. If you don’t know where to go or where to start we can offer that support. I think it’s about being reliable and delivering something too – hard work is important.

Mike: I would say exactly the same. It’s probably slightly different with music in that financially you might be set back – although this is something The Warren can help with. With zines, you don’t have any of that holding you back. If you’ve got one piece of paper and a pen, and 50p for photocopies – you can make a zine. I always say to people that if you’re unsure you can find some friends and each do a page, or don’t put your name to it and make a penname up. There’s nothing worse than speaking to someone who’s got creative ideas and they don’t do it. I do loads of stupid stuff and I don’t mind if it works or it doesn’t work. You don’t want to overedit yourself – just get it out into the world. 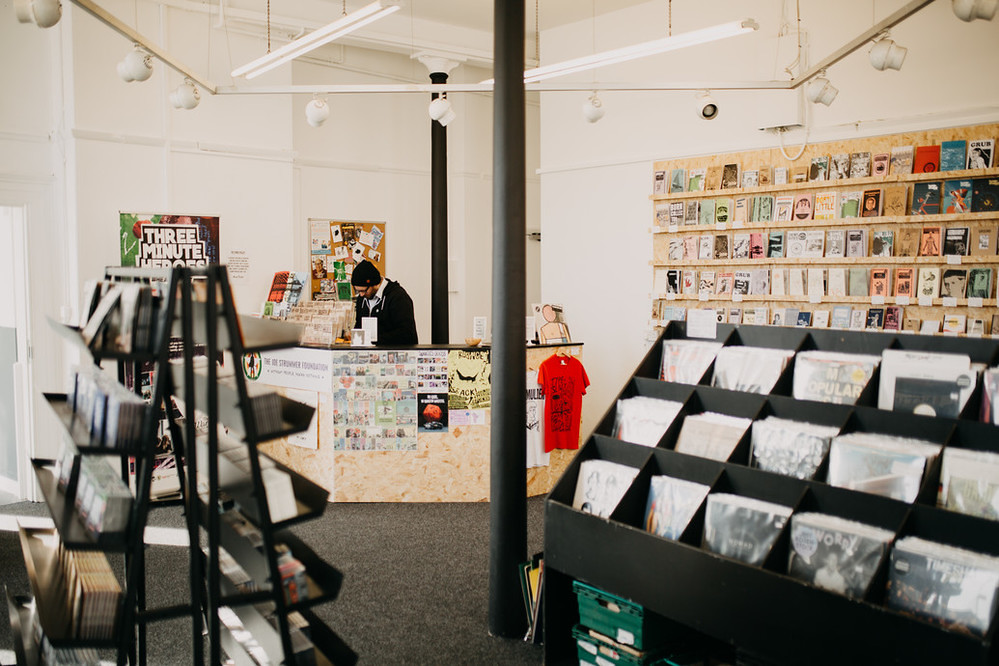 What are your future plans for the store?

Mike: We want people to be able to buy things that you might only be able to get in London, New York, Chicago. There’s a shop called Quimby’s in Chicago and it’s well known as one of the best book shops in the world – that’s what I aim for. I want people to come in and not be able to believe that it’s in Hull. There’s a long way to go but there’s no reason why Hull can’t become that city that’s got one of the best independent stores in England.

Hull’s always had a good pool of talent but I think as a city we don’t like to show off. There was always that stigma that we weren’t Leeds, we weren’t Manchester. But now I think it’s gone the other way – people are proud of where they’re from and it’s shaping what they make. We see that a lot with the zines we get from Hull – it’s really good stuff. That’s another one of our big missions in the shop. We want to encourage more people to write zines and do it more regularly. We want to become that place that people know for the awesome zines that come out of it.

Stewart: I want people to feel like they can come in and sit down and listen to records and read books and feel like they were part of a community. That’s what inspired me when I was younger. When I went to record shops, it was my dream to have my CD on there – it makes you feel there is an outlet. That can really inspire someone to do something. If we create a community and people are filling these shelves without our help then that’s perfect. I’s not about the shop. It’s not about selling goods. That’s just how we’re making relationships. It’s about getting to know people and building trusty relationships within the community, through art.

If you fancy checking the shop out for yourself, bob over to 47-49, Queens Dock Chambers, Queens Dock Avenue. Plus, head to Type Slowly’s Facebook to stay up-to-date with everything they have planned.