If it’s Christmas time, it’s panto time. Is there a greater pleasure to be had than shouting and bawling at the bad guy like you’re a child again? Paul Smith, artistic director of Middle Child theatre company, certainly doesn’t think so. Anyone who’s had the pleasure of seeing the company’s previous productions will know they’re in for a treat at this year’s “alternative” pantomime.

“It’s panto with a difference because we perform in a warehouse,” Paul says. “It’s intimate, it’s live, it’s loud and you’re right there with the characters. It’s deliberately tongue-in-cheek and it knows exactly what it is.”

This year, the production of Dick Whittington will bring the company’s trademark chaos and fun to the stage in Fruit. Will Dick, Cat, Baps and the rest of the gang come out on top against Queen Rat? Are the streets of London really paved with gold?

The answers will be revealed with a distinctive Hull twist and obligatory local jokes which add so much colour. Add in live music and the promise of the wildest mess scene in the country, and it’s fun for all the family, but special late night adult-only shows offer extra laughs for those looking for something a little near the knuckle. 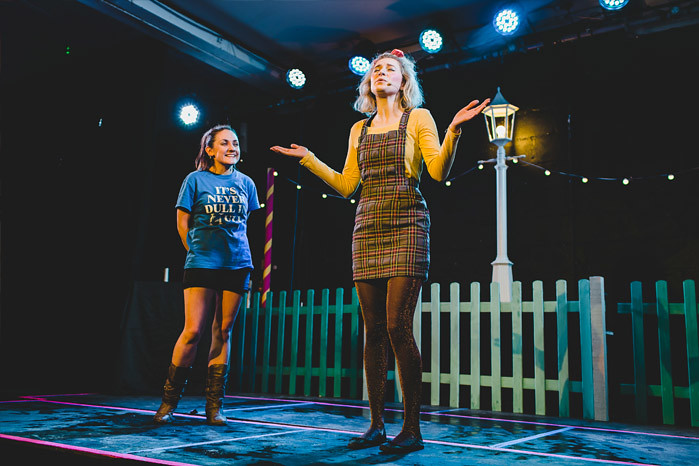 Dick Whittington also signals a change in direction on the writing front. After completing a cycle of traditional pantos with Dave Windass, this year offered the company the chance to finally work with Tom Wells. With numerous West End credits to his name, Wells is very much the local lad made good and has embraced the responsibility of making his hometown crowd laugh.

“We try to find the joy and heart of the panto and that’s something Tom has really bought into,” Paul says. “It’s such an important part of the Christmas ritual and such a nice thing for families to do together. It’s often the first experience of theatre for young people. We want to try to find ways of reaching people who might not necessarily come along.”

It’s a promise the company has made good on by using Spacehive, a crowdfunding platform. Times are tough, but in exchange for rewards such as social media shout outs and signed posters, the money raised goes into the show to buy props and costumes, as well subsidising general admission tickets.

Hull has certainly demonstrated its love for the theatre company over recent years, but the feeling is mutual, with several hundred free tickets distributed to local charities in recognition of the work they do.

“People were so generous and we were able to hit the target,” Paul says, clearly thrilled that more people will be able to enjoy the spills and thrills of the company’s distinctive brand of panto this Christmas.

If there’s one thing we can rely on from Truck, it’s their ability to reimagine traditional stories in a genuinely exciting and local way. This year, attention turns to Robert Louis Stephenson’s Treasure Island. Opening in Withernsea, Jem needs the help of the audience and Long John Silver as she searches for gold on the high seas. With original songs and music, this Christmas adaptation of the much-loved tale promises to be a treat for all ages. Book tickets here.

Fear not that Hull New Theatre is closed for renovation work. If you’re looking for traditional panto, the City Hall’s production of Mother Goose will be sure to deliver. Staged by One Off Productions, and staffed with local stars such as Samantha Atkinson from fresh her stint on X Factor, sit back and cheer on the jousting between the Demon King and the Fairy Happiness, but ensure your voice is heard so the right side wins. Book tickets here.

It’s not Christmas until you’ve warmed yourself through with the magic of The Snowman. Not only is the book by Raymond Briggs a firm family favourite, the soundtrack to the animation remains iconic and instantly recognisable. Having both brought together at Hull City Hall promises to be a real treat. With a live orchestra, this is a rare opportunity to experience the most Christmassy of stories brought to life in front of you on the big screen. Book tickets here.

If it’s glittering, star-studded panto you want, the answer lies to the east of the city in the car park at Hull Kingston Rovers. Yes, really. To help plug the gap left by the New Theatre’s temporary closure, a special 1,400 seat pop-up venue has been created. Performing Cinderella, you’re guaranteed breathtaking special effects, amazing costumes and starring roles from Linda Lusardi, Zippy and George from Rainbow, and even Postman Pat. Book tickets here.

As expected from such a unique venue, Kardomah94 offers something a little different. Hull’s Angel is a nativity play with a twist. Rather than the road to Bethlehem, it’s the M62 in the direction of Hull that hairdresser Mary must travel. And that’s before the shepherds turn up to offer a helping hand. Will Mary meet three wise men in the city? Find ticket information here.

The University of Hull: School of Arts Christmas Cabaret

If you can’t decide what to see, go see the stars of tomorrow in the newly refurbished Middleton Hall at the university. With a little bit of everything from poetry to panto, you’re also promised music and plenty of laughs. There’s also the chance to enjoy the university staff performing their own party pieces, and that’s an opportunity not to be sniffed at. Expect the unexpected. Book tickets here.

Always the beating heart of Christmas events in the city, Holy Trinity once again is offering a packed programme of events. From the informal all-age Christingle, through to brass bands and Holy Communion, a highlight will be the traditional Nine Lessons and Carols service, with the choir and congregation celebrating Advent and Christmas together. Full details available here.