Crafted by prisoners of HMP Hull as part of Hull 2017’s Creative Communities Programme, the replica Gipsy Moth has won hearts and minds over the last year.

Having been spotted by around 30,000 people a day in Paragon Station, including the Queen, Sadiq Khan and Goldie, the plane is now to set to move next door to St Stephen’s shopping centre for a year.

The model celebrates the legacy of Hull-born hero Amy Johnson, the pioneering aviator who was the first woman to fly solo from England to Australia in 1930, in a de Havilland Gipsy Moth bi-plane named Jason. 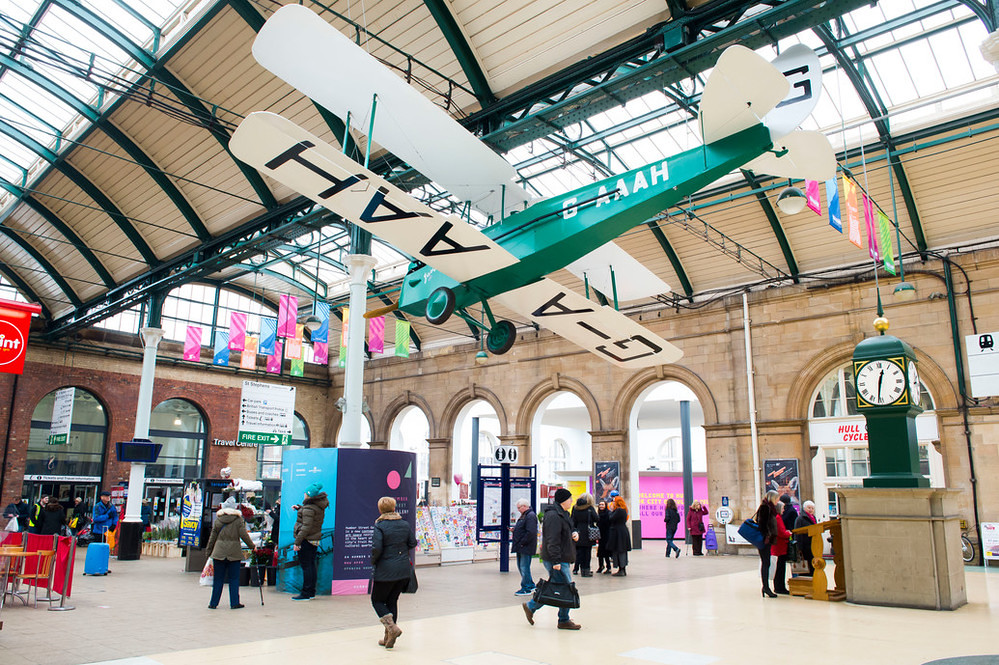 Next month the plane will be taken down from its display in Paragon Station, cleaned and touched up, then relocated in St Stephen’s. There are also plans to create an interactive interpretation board to enable visitors to find out about how the model was created.

Jim Harris, Centre Manager at St Stephen’s Hull, said: “The model of Amy Johnson’s Gipsy Moth celebrates the creativity and culture in every single corner of Hull, and the incredible legacy of Amy Johnson.

“We are delighted to help the plane on the next leg of its journey, and offer it a place at St Stephen’s Hull. With 12 million visits a year the model will continue to be enjoyed, and tell its fascinating story, to all our customers.”

The idea to create this full-scale model of the straight-winged, two-seater aircraft was former prison governor Steve Murray’s. Steve and artist Leonard Brown joined forces and were named as one of 60 new projects which received funding through the Hull 2017 Creative Communities Programme, delivered in partnership with the Big Lottery Fund, a principal partner of Hull 2017.

Geoffrey de Havilland’s original design was brought to life in the prison’s engineering workshop. The project took seven prisoners 3,600 hours to make and formed part of the prison’s Reducing Reoffending initiative, giving everyone involved the opportunity to improve key skills.

Gary Sword, Head of Reducing Reoffending at HMP Hull, said: “We are always looking for new ways to engage the prisoners and develop their skills so when we found out about the Hull 2017 funding, we thought it would be a great opportunity to get involved.

“Due to security restrictions, the prisoners didn’t have access to the kind of tools you would use to build such an ambitious model in the outside world so it has been a real blood, sweat and tears exercise. They’ve not only gained transferable skills such as team-building which will help them secure future employment when they get out but they’ve developed an enormous sense of pride.

“When Hull was announced as City of Culture, I don’t think the prisoners could have dreamt of being part of it, so to have created something that has been so well received and is set to become part of the Hull 2017 legacy is just incredible.”

Martin Green, CEO of Hull UK City of Culture 2017, said: “The Gipsy Moth is a great example of how Hull 2017’s Creative Communities has involved people who might not otherwise think arts and culture is for them, to be part of Hull’s special year.

“We are delighted that the model plane has found a new home in the city. It is not only an opportunity for residents and visitors to learn more about one of the city’s revolutionaries Amy Johnson but also a chance to reflect on another milestone in Hull’s history – its tenure as UK City of Culture.”