Hull 2017 in Pictures: Made In Hull – Visit Hull
Skip to content

Our opening fireworks display In With A Bang was a huge statement of intent. Loud, bold, family-friendly and with a soundtrack of Hull classics, this colossal display set the tone for the year ahead. 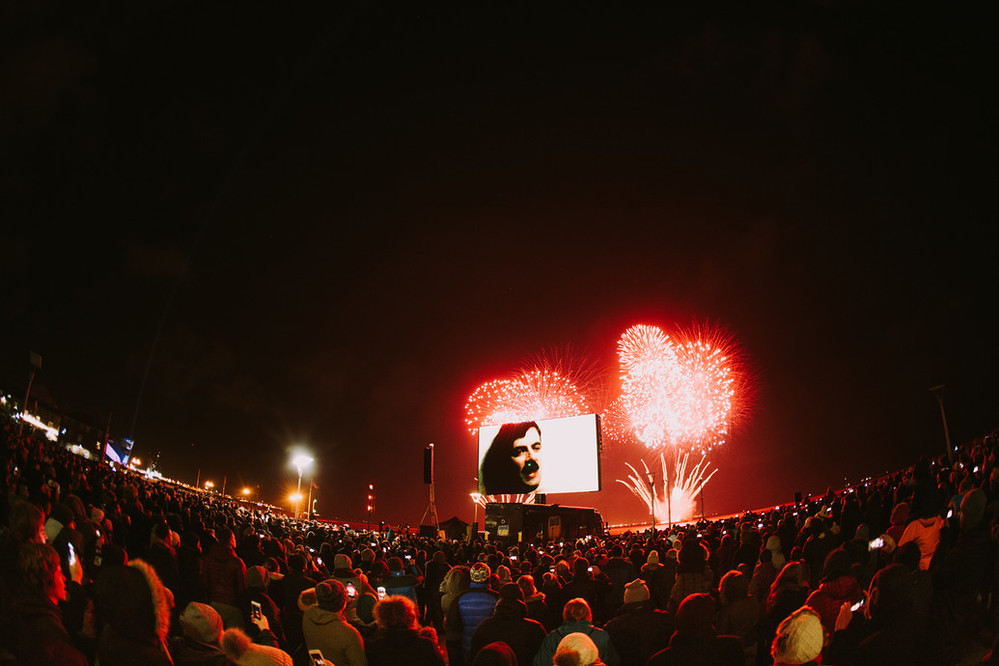 But it wasn’t all about the fireworks. For our opening week, Made In Hull took over the city centre with a series of large-scale projections, soundscapes, installations and performances, telling the story of our city over the past 70 years. Curated by Hull-born film director Sean McAllister, Made In Hull was an awe-inspiring look at Hull’s past, present and future. 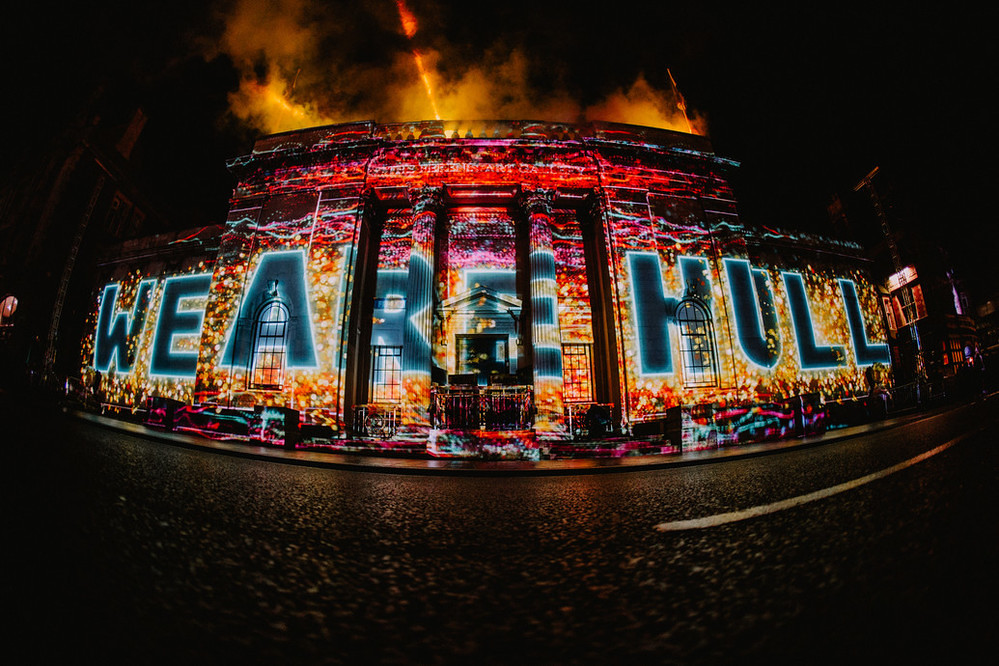 Our bold visual art programme started in January with one of the most striking installations the city has ever seen – Blade by Nayan Kulkarni. This 75m wind turbine blade, created in Hull at the Siemens Gamesa factory in Alexandra Dock, was the first in our Look Up series of artworks in public spaces. This huge, hand-crafted artwork sat in Queen Victoria Square from January to March 2017, with just enough room for buses to pass underneath. 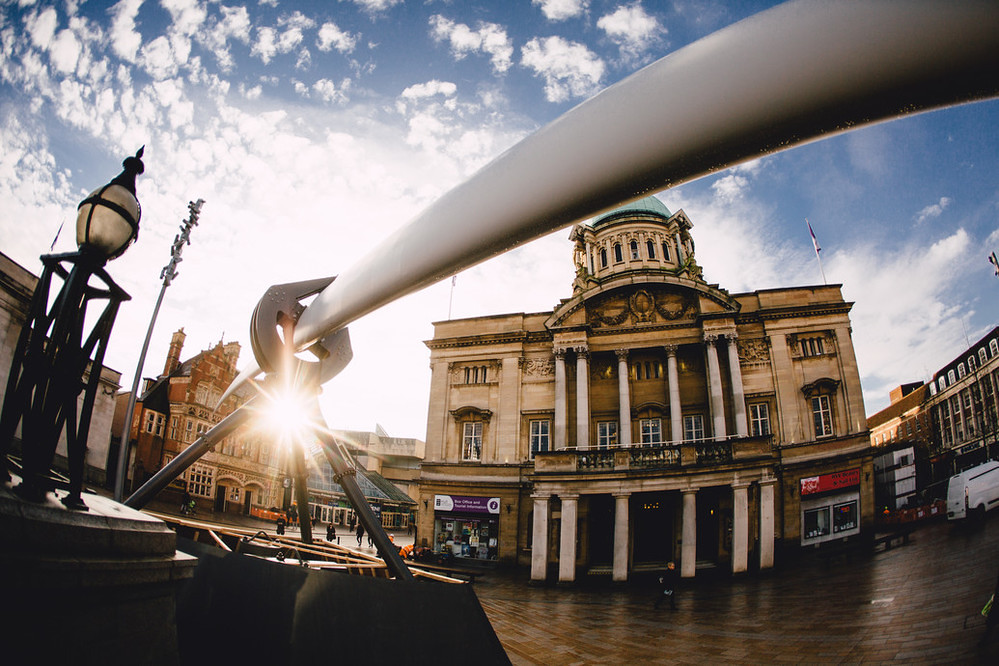 In February, we opened the doors to Humber Street Gallery for the first time. With Dead Bod proudly on the wall, this new contemporary art space for Hull opened with a clear message, from Curator David Sinclair: “I hope to generate debate, push boundaries, and encourage new ways of thinking for both those familiar with the arts and those new to this arena.” 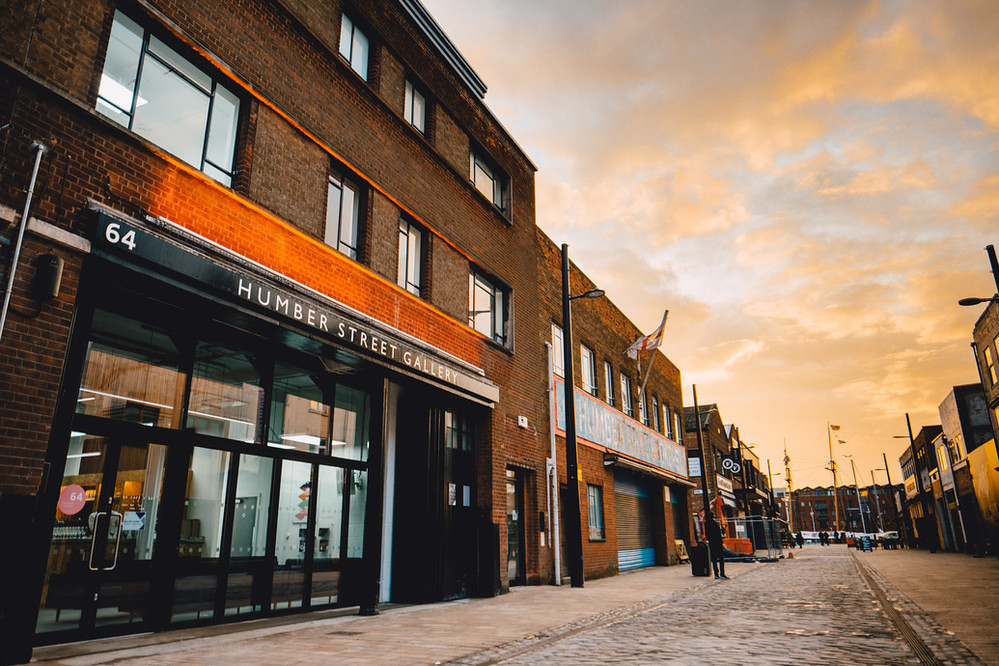 Humber Street Gallery’s opening exhibition, COUM Transmissions, did all of this and more. This retrospective of Hull’s most notorious art collective (dubbed the ‘wreckers of civilisation’) combined an exhibition of objects from the group’s archive with a live programme, including performances from the group’s co-founders Genesis P-ORRIDGE and Hull-born Cosey Fanni Tutti. 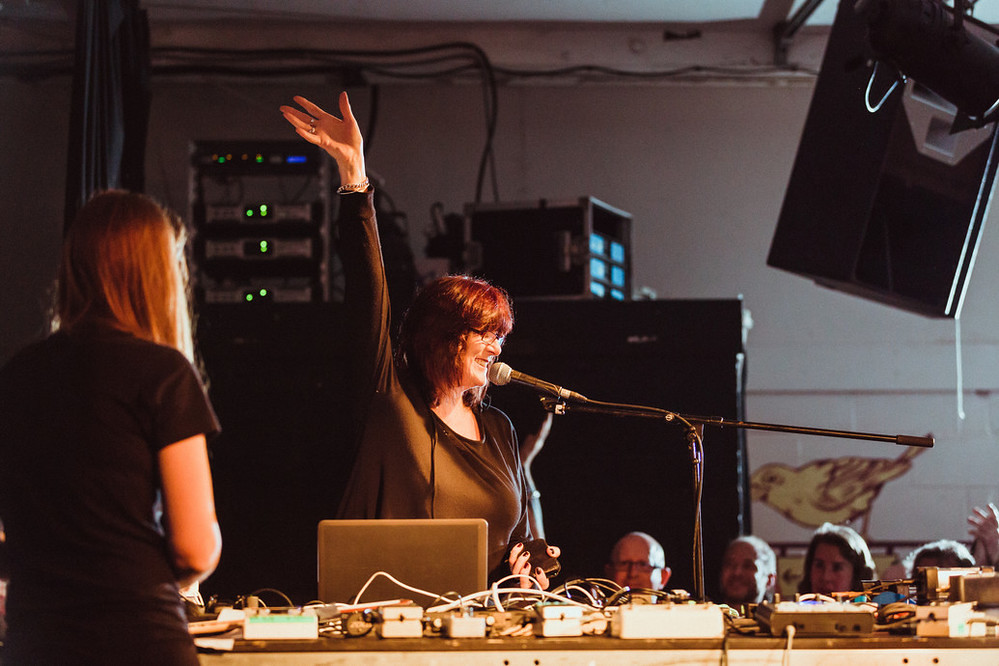 Look Up continued in February with The City Speaks, an interactive artwork from Michael Pinsky, turning Hull’s iconic Tidal Surge Barrier into a 21st century Speakers’ Corner. Through a lectern on Humber Street, The City Speaks invites the public to speak aloud and see their message appear along the tidal barrier in giant letters, for the whole city to see. Only one or two rude words got through. 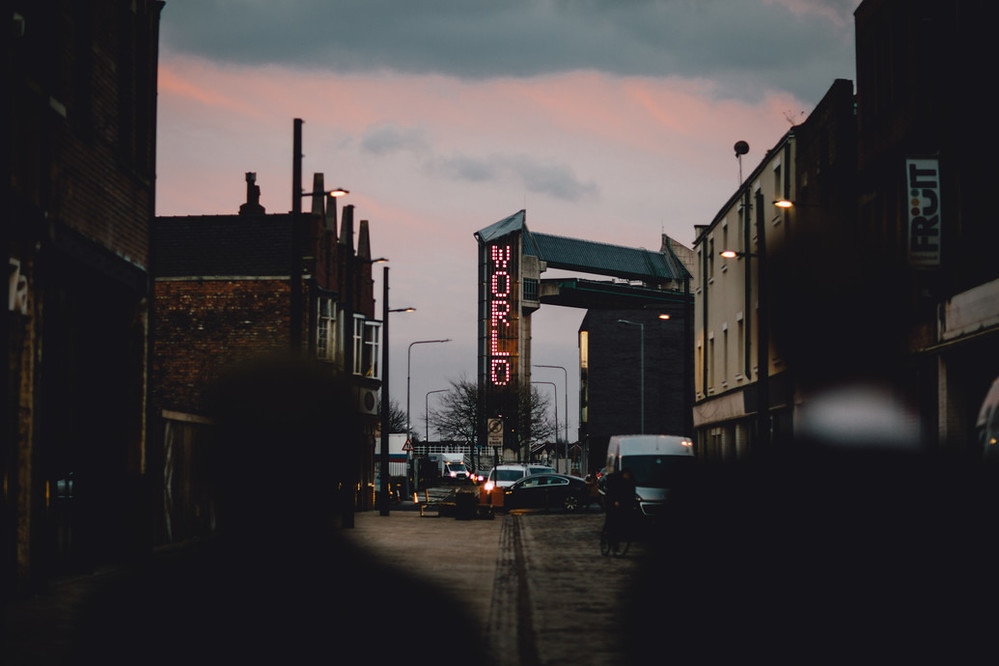 From visual art and installation to theatre and music, there was plenty of live performance to keep us entertained in February. Mind On The Run: The Basil Kirchin Story looked back at the life and work of a forgotten musical visionary who called Hull home. Artists including Goldfrapp’s Will Gregory, the BBC Concert Orchestra, The Specials’ Jerry Dammers and jazz legend Evan Parker joined forces to celebrate Basil Kirchin, Hessle Road’s creative genius. 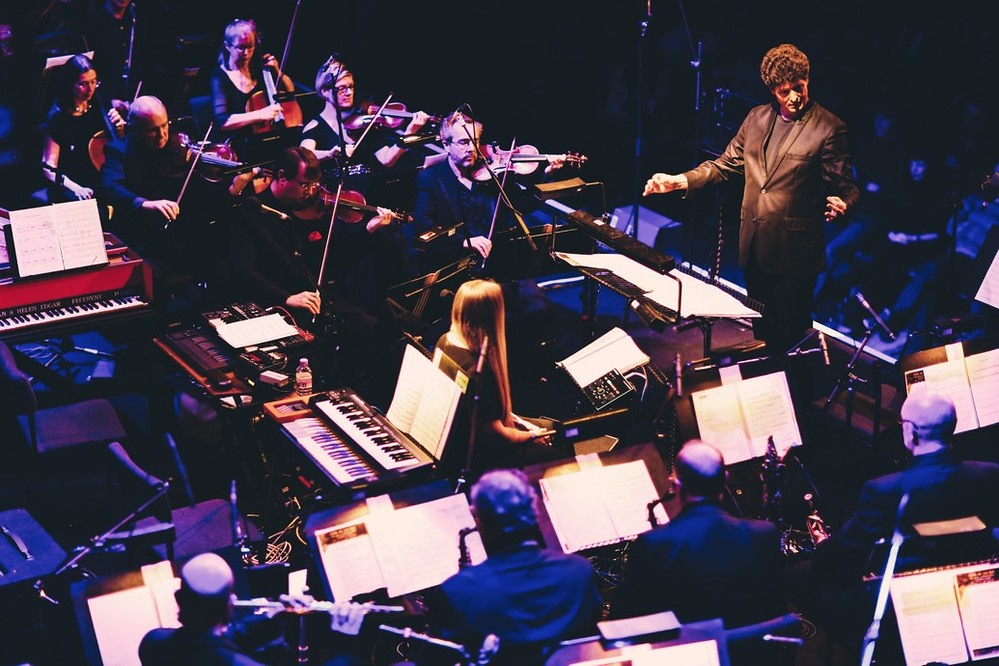 Over four days in the February half-term holiday, the first ever Back To Ours festival brought big name acts to unexpected places, with a festival line-up in community venues across Hull. With Jenny and Lee from Channel 4’s Gogglebox hosting a night of raucous cabaret in the William Gemmell Club, The Pigeon Detectives performing live in the Freedom Centre and performances in school halls across the city, the inaugural Back To Ours festival took high quality events right into the heart of Hull’s communities. 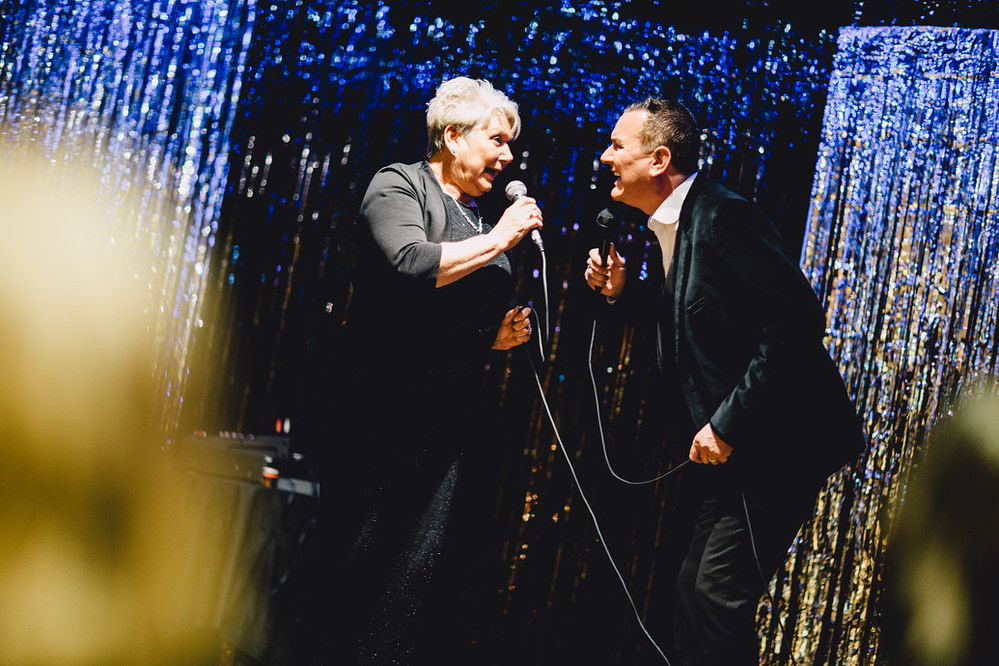 Hull Truck Theatre’s year of exceptional drama began in style in February with The Hypocrite, a co-production with the Royal Shakespeare Company and Hull 2017. This world premiere production, written by renowned Hull-born playwright Richard Bean and starring Mark Addy and Caroline Quentin, told the farcical (and true – ish) story of Sir John Hotham, Governor of Hull and the man who turned the king away from the city, sparking the English Civil War. Glowing reviews followed – the first of many for Hull Truck in 2017. 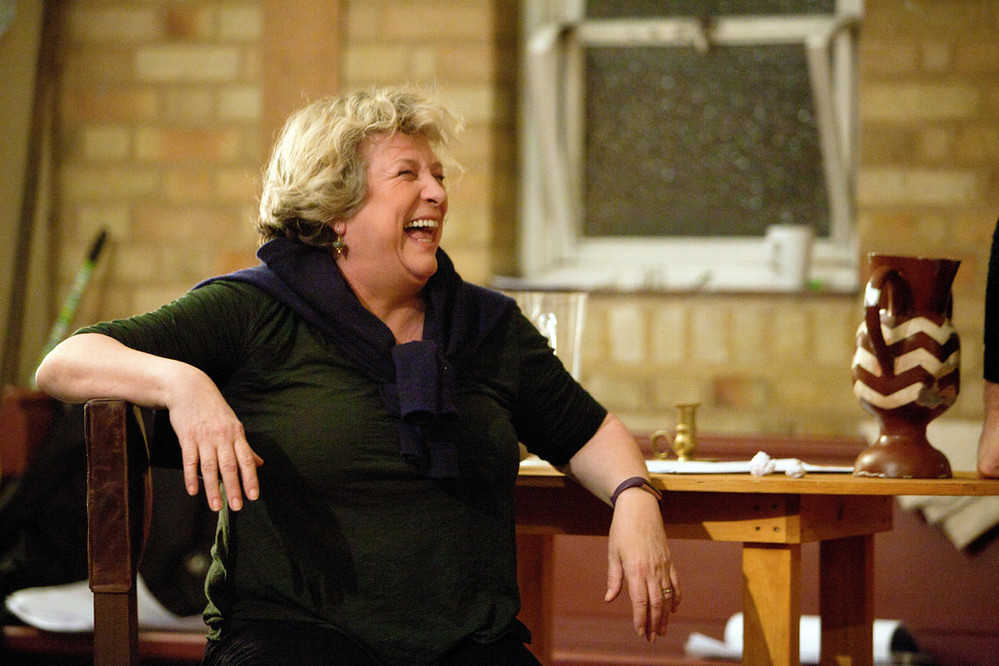 Classical drama was radically retold in February, with Hull theatre company The Roaring Girls’ production Weathered Estates at the University of Hull. Written by Zodwa Nyoni, this timely retelling of Euripides’ Women of Troy told the story of four displaced women fleeing their homes in search of safety. In March, the sold-out show was revived for WOW Hull festival. 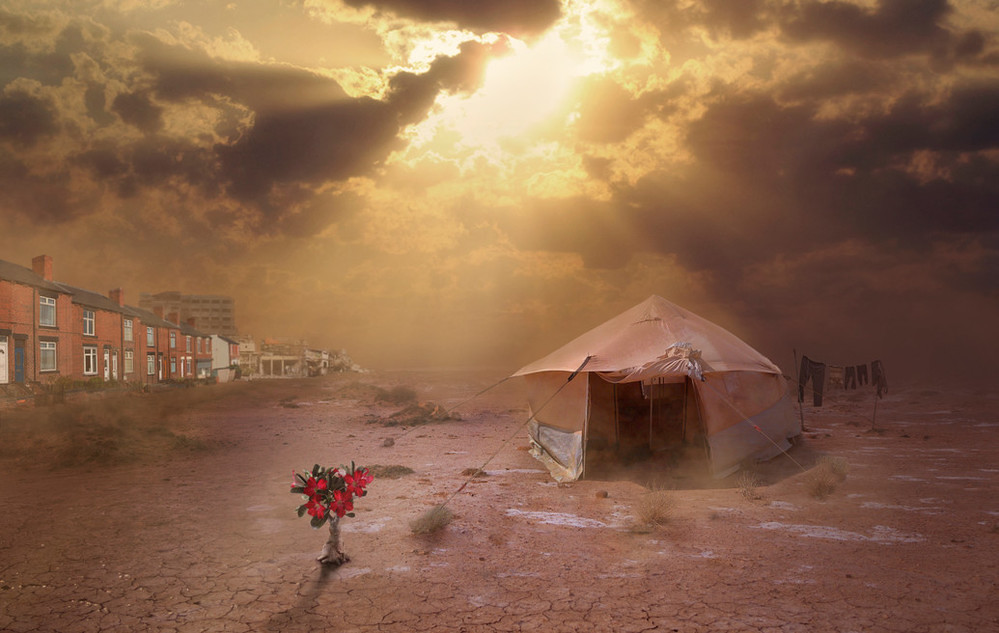 WOW Hull (Women of the World Festival) took over venues across the city in March, to celebrate women and girls with a festival of talks, debates, music, film, comedy and activism. Based on the premise that an equal world is a better world for all of us, WOW celebrated equality in all its forms.

Highlights at the festival included a panel session with Hull boxing legend Barbara Buttrick, a live comedy drama readthrough with Lucy Beaumont and Maureen Lipman, and a great big yellow bus, hosted by BBC Radio 1’s Gemma Cairney, where anyone and everyone was invited to talk, listen and learn something new. 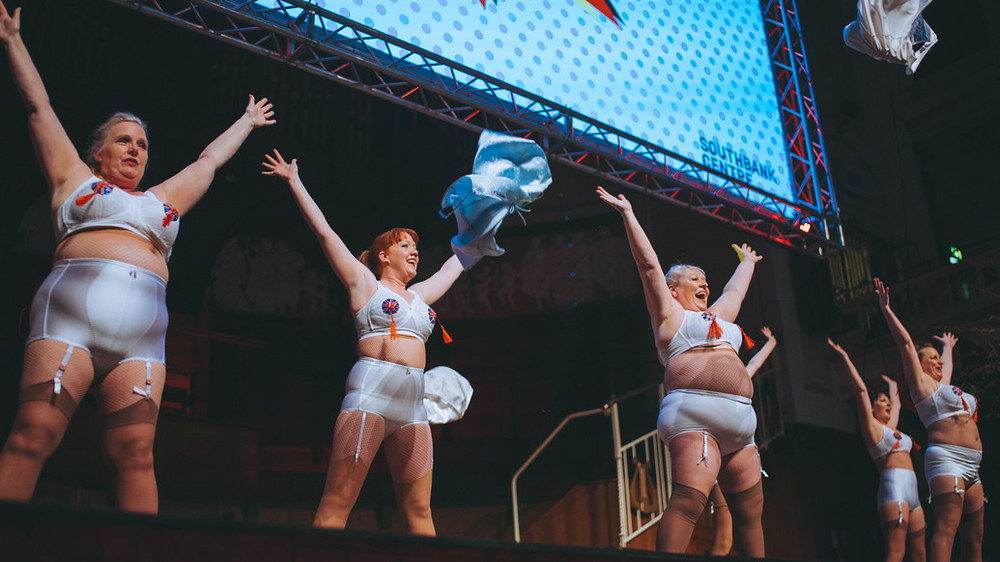 The city’s programme of groundbreaking theatre and performance continued with the first Heads Up Festival of 2017. A collaboration between Hull’s Ensemble 52 and London’s Battersea Arts Centre, this festival is a firm favourite with theatre audiences in our city. Energetic, vibrant and with a radical heart, the March festival concluded with The Rave Space, a clubbing-inspired, trance-endental piece of theatre performed at iconic music venue The New Adelphi Club.

Over two nights in March, Hull City Hall played host to a very special homecoming. In celebration of David Bowie and an album that shaped the face of music forever, Hull’s iconic musical exports The Spiders From Mars returned in the form of Holy Holy, featuring original Spiders drummer Woody Woodmansey, Bowie producer and collaborator Tony Visconti and Heaven 17’s Glenn Gregory, to play The Rise and Fall of Ziggy Stardust and The Spiders From Mars in its entirety. 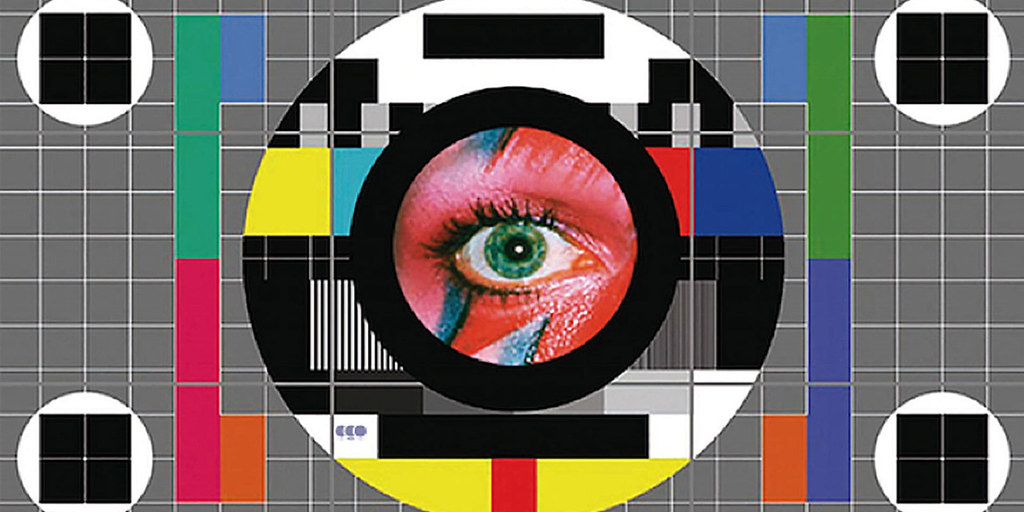 Our CCP (Creative Communities Programme) has seen community projects come to life across Hull this year – check out a few of our highlights here. One CCP project that has truly caught the eye is I Wish To Communicate With You, which has been shining a light on Hull’s Thornton Estate since March. Created by artist Silvio Palladino and lighting consultant James Bawn, along with the people of Thornton Estate, this light installation uses coloured filters in tower blocks, inspired by Hull’s maritime history and traditional methods of communicating at sea. 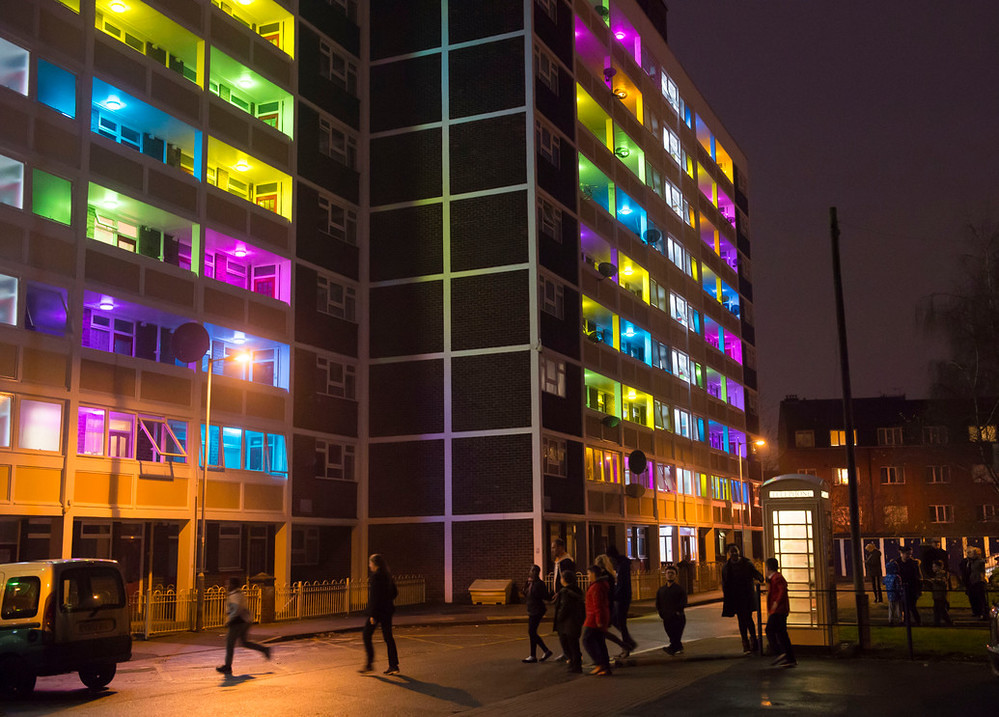 What are your highlights from our Made In Hull season? Let us know in the comments below or share your photos with us on Facebook and Twitter.